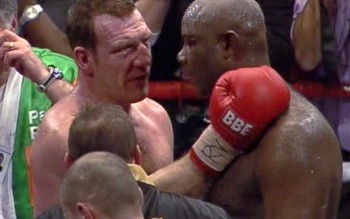 by James Slater – Tonight, in Birmingham, UK, 37-year-old Irish tough guy Martin Rogan sensationally became the first man to knock down and stop “Bedford Bear” Matt Skelton. Sending the defending Commonwealth heavyweight champion down in the 11th round with a series of right hands to the head, Rogan prompted referee John Keane to dive in and rescue the 42-year-old seconds later as he teed off on him in a corner. The official time of the stoppage was 1 minute and 21-seconds of the round. With the win the amazing story of the gutsy Rogan, now 12-0(6) continues. Skelton, who fell to 22-3(19) will have some tough time coming back from his only inside the distance loss.

There may not have been too much skill on display by either warrior tonight, but there was no shortage of heart and courage – especially from the shorter and lighter Rogan. A great battle of attrition ensued at The National Indoor Arena, Birmingham, and the action was great to watch.

Right from the opening bell the pace was a fast one. Fighting on the inside, Skelton (also the European heavyweight champ, title not on the line tonight) scored with some good right hands to Rogan’s head. Most of the round was fought as the younger man was stuck on the ropes, and already a gruelling battle was shaping up.

Rogan came back well in the 2nd and took his turn to force his man back. Skelton fired back himself, though, while Rogan finished the round on top to make it level on the cards.

Skelton enjoyed a good 3rd round, as he scored with some rights and a left to the head. Rogan fired back with both hands, but then Skelton caught him with some eye-catching uppercuts upstairs. Body shots too scored for “The Bear” and he even dropped his hands and smiled at the man from Belfast.

A big right hand to the head from Rogan began the 4th, and then the inside battle continued. There were inside uppercuts landed by both men, and big Matt grunted as he threw some heavy right hands at the end of the session.

Another good right hand to the head appeared to temporarily stun Skelton in the 5th, and Rogan also got through with a left to the jaw. Rogan, inspired by his success, went for it and he also managed to open a cut over the champion’s left eye. Time-out was briefly called by referee Keane due to the injury, and then battle recommenced, with Skelton turning southpaw for a spell.

A really hard and engrossing slugfest was well under way by the 6th round, and again Rogan won the three minutes. A notable left hook to the head scored for him, while Rogan was also issued with a warning for a low blow he connected with by accident. Driving himself on towards the end of the round, “Rogie” picked up another round of satisfying action.

There was more movement and use of the ring by Skelton in the 7th, but Rogan was still catching him with punches. Then a big right hand slammed into the older man’s head and it looked as though Skelton might be tiring.

By the 9th it was anybody’s fight. Skelton jabbed well in an effort to slow things down, and Rogan, who also needed a breather, couldn’t get off with any shots to speak of. Then, suddenly looking spent, Rogan was caught flush by a three-punch combo to the head. Supporters of neither fighter could afford to relax for a second!

There was more boxing by the experienced Skelton in the 10th, and a seemingly fading Rogan had to drive himself forwards with everything he had. A right hand cracked into the Irishman’s skull at the end of the round, and it looked like he had used up all of his energy.

In the 11th round, however, the man with just 11 fights to his name coming in shocked both the crowd and Skelton. The 42-year-old was letting his hands go well enough, before Rogan let loose with five consecutive and stunning right hand punches to the head. Refusing to stop throwing until he got what he wanted, Rogan finally saw his man crash to the mat. Skelton, suffering the first knockdown of his pro career, bravely beat the count – but he was then pinned in a corner and under more fire. Caught with some snappy shots to the head by a relentless underdog, the Commonwealth champ saw his title disappear as the third man in the ring dived in and called a halt.

An incredible fight was over, and there can now be more to look forward to in the career of the astonishing Martin “The Entertainer” Rogan. A man whose nickname was proven to be most apt tonight.