De La Hoya vs Forbes On May 3rd 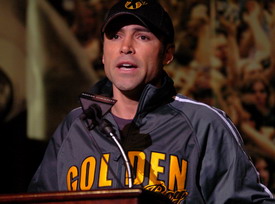 17.02.08 – By Matthew Hurley: According to a report filed by ESPN’s Dan Rafael, Oscar De La Hoya, 38-5 with 30 KOs will face former junior lightweight titlist Steve Forbes, 33-5 with 9 KOs on May 3rd. Boxrec.com has listed the bout as taking place at the Home Depot Center in Carson, California. De La Hoya insisted on a tune-up bout before his scheduled September rematch with Floyd Mayweather. Oscar lost by split decision in their first fight back in May of 2007.

Forbes was last seen in the ring in October of 2007 winning a ten round split decision of former highly touted prospect Francisco Bojado. That victory came after two straight decision losses to Demetrius Hopkins and Grady Brewer. Forbes was also a featured player on the second season of the Contender series. He was the runner-up in that competition..

Forbes won the vacant IBF super featherweight title in December of 2000 with an eighth round technical knockout over John Brown. He made one successful title defense in a rematch with Brown before being stripped of the belt for failing to make weight in a defense against David Santos. Forbes won a split decision over Santos.

He later lost in his bid to regain the title against Carlos Hernandez in 2003. The fight was stopped in the tenth round due to a cut suffered from an accidental headbutt. In his final attempt at a super featherweight title he lost a twelve round unanimous decision to Yodsanan Sor Nanthachai in 2004.

The maximum weight for the bout will be 150 pounds. The fight will be broadcast on HBO, De La Hoya’s first non-pay-per-view appearance since stopping Arturo Gatti in 2001.

The Oscar De La Hoya – Steve Forbes bout will be formally announced at a news conference on February 26th in Los Angeles.

Next post: Pavlik beats Taylor in an Intense 12 rounder

Boxing News → De La Hoya vs Forbes On May 3rd