Floyd Mayweather – “My Body Is Tearing Down”

28.11.07 – Matthew Hurley: Was it gamesmanship or was it a revealing look into what happens to a fighter’s body, even the best in the world, as it begins to break down after years of punishment? On the second episode of HBO’s documentary series 24/7 on the upcoming Hatton – Mayweather welterweight fight the “Pretty Boy” was full of his usual profane bluster and provided glimpses of his noted intense training regime. But towards the end of the program there was a moment that finally humanized the all too often ego driven fighter.. 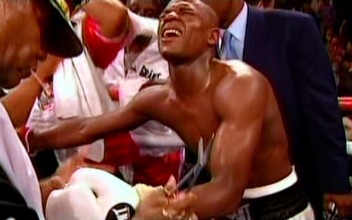 As he sat at a table in his physical therapist’s office going through yet another wax paraffin treatment, Mayweather quietly lamented, “She (my doctor) thinks I shouldn’t be fighting too much more. My body’s tearing down. My left hand is tearing down. And I never used to have hand problems until it started happening later in my career as a professional. Now my right hand, my elbow, my back… The shit goes on and on. It’s nerve wracking.”

Mayweather’s hand problems have long been documented and were the cause of the only knockdown of his career when he crashed his left hand on the top of Carlos Hernandez’s head in 2001. Floyd, grimacing in pain, took a knee. He survived the bout, fighting basically one handed, but since that moment his brittle hands have always been a source of concern for the fighter and a source of hope for his opponents. Even Hatton, a bit perplexed as to why Mayweather would allow the world to see his vulnerability when he won’t even allow sparring sessions to be attended or filmed, believes that one of the reasons Mayweather rarely punches for power, rather using speed to befuddle his opponent, is to keep from injuring his hands.

“It’s common knowledge that Floyd has bad hands,” he recently commented to the Sporting Life. “I just hope that on the night when I beat Floyd and it all seems fair he doesn’t try to blame it on the dancing or bad hands.”

The dancing that Hatton alluded to was Mayweather’s short-lived stint on the television program Dancing With The Stars. That distraction led many to believe that Mayweather was not taking his opponent seriously. Hatton was fine with that and continues to relish the steep odds stacked against him.

“Everybody has picked Floyd to beat me,” he says, “and that suits me just fine. I couldn’t care less if everybody picked Floyd because the last time no one gave me a chance I made (Kostya) Tszyu quit, and I’m going to make Floyd quit too.”

After that brief glance into the quieter more contemplative side of Floyd Mayweather the fighter suddenly ceased to be mild mannered Clark Kent and morphed into his more comfortable Superman role.

“He hasn’t fought forty-three Floyd Mayweathers,” he said. “Because if he did, he’d be zero and forty-three.”

But should Mayweather’s Kryptonite prove to be his hands during the fight with Hatton he may not be able to keep the “Hit Man” off of him. Of course thirty-eight of Mayweather’s previous opponents hoped for just the same thing to happen when they found out just how fast and difficult to hit he is. And all thirty-eight of them left the ring with a loss on their record.

Next post: Alonzo Butler vs. Dominick Guinn on Dec 28

Boxing News → Floyd Mayweather – “My Body Is Tearing Down”