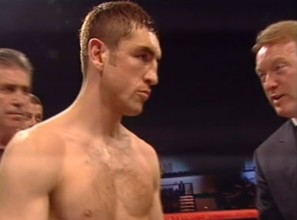 21.07.07 – By Chris Williams: Super featherweight Alex Arthur (25-1, 19 KOs) stopped Georgian fighter Koba Gogoladze (20-2, 8 KOs) in the 10th round of their WBO interim battle on Saturday night at the International Hall in Cardiff. Arthur, 29, knocked Gogoladze down three times over the course of the bout, once in the 6th, eighth and tenth rounds. With the win, Arthur becomes the mandatory challenger for WBO Super featherweight champion Joan Guzman.

In the early going, the Southpaw Gogoladze, 34, created a lot of problems for Arthur, hitting hit with fast lead left hands, before quickly moving out of range with his fast feet. The first four rounds were clearly controlled by Gogoladze, who appeared to be completely outclassing Arthur up to that point. However, late in the fourth round, Arthur connected with a couple of tremendous right hands, giving a glimpse of what was to come in future rounds. Arthur was cut around the right eye in the fourth, coming from a clash of heads.

Arthur came out stalking in the 5th round, and landed some picture perfect left-right combinations that caused the crowd to roar with approval. The applause appeared to encourage Arthur even more, as he continued pumping in right hands during the round and had Gogoladze in full retreat much of the time.

In the sixth round, Arthur knocked Gogoladze down with a left hook to the side of the head. However, it appeared that Gogoladze had actually slipped as he was getting hit and shouldn’t have been ruled a knocked down. However, the knockdown stood.

Gogoladze looked exhausted in the 7th and 8th rounds, likely due to the constant pressure Arthur was placing on him with his aggressive attacks. In the eighth round, knocked Gogoladze down again, though it appeared that he had actually slipped down once again and the referee had missed it, like before. He was hit with a right to the midsection moments before but he seemed to be okay and was trying for a clinch when he slipped out of Arthur’s grasp and fell. At any rate, the knockdown hardly mattered as Gogoladze was fading badly.

In the ninth and tenth rounds, Gogoladze was badly exhausted and was getting punched around the ring by Arthur. Though he continued to move well, Gogoladze had lost all the zip on his punches and looked ragged. In the tenth, Arthur knocked Gogoladze down again after landing two consecutive left hooks to the head, while holding onto Gogoladze’s left hand and keeping him stationary. Again, the referee completely missed the holding and hitting, and ruled it as another knockdown. After Gogoladze made it up, Arthur landed two huge left hooks to the body, and then two rights to the head as Gogoladze turned his back on him and tried to escape. Arthur then pursued after him and shoved him into the ropes where he landed several shots, causing the referee to step in and halt the bout.