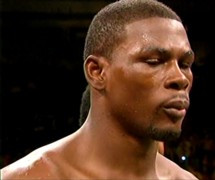 24.02.07 – By Jim Amato: I’ll bet Kelly Pavlik, the unbeaten middleweight contender from Youngstown, Ohio, is fit to be tied. Kelly, who is eager and very much deserving of a title shot, is still on the waiting list. Middleweight champion Jermain Taylor will defend his boxing crown against one time Contender show winner Sergio Mora. What is Mora’s claim to fame? He has two wins over Peter Manfredo Jr. Sergio has never fought, let alone beaten, a legitimate top ten or even top twenty worthy boxer. He deserves a shot at Taylor about as much as Manfredo deserves a crack at Joe Calzaghe’s super middleweight title.

I enjoy the Contender show but the boxers involved, except for a select few, are not among the elite boxers in the world. Case in point, last years Contender winner Grady Brewer was stopped in two rounds by Pavlik earlier in his career.

The Contender series gave some of the boxers who participated quite a bit of television boxing exposure, and because of this, there may be a fair amount of fans interested in Calzaghe vs. Manfredo and Taylor vs Mora. To me, Calzaghe and Taylor are in for what will probably be a decent payday against a safe foe. The bottom line, is that there are several boxers who merit a title shot at 160 and 168 lbs, long before Manfredo and Mora.

I won’t go so far as to say these are blatant mismatches, but I fully expect both Calzaghe and Taylor to win by a knockout. This is a tremendous jump up in class for both Peter and Sergio and that should become apparent during their matches.

If Calzaghe and Taylor both win, will Taylor move up to fight Calzaghe at 168 lbs? It’s a shame that bona fide contenders like Pavlik, Edison Miranda and Allan Green are on the outside looking in. Miranda and Green will be meeting soon. Will Taylor meet the winner? One has to wonder.