Top warriors Joe Selkirk and Gary Corcoran will clash in a battle of the undefeated when they face each other at the National Stadium in Dublin on Saturday 6th February, 2016.

Nigerian-born cruiserweight contender Olanrewaju “God’s Power” Durodola says he’s relieved to have been cleared of doping allegations made by a discredited Russian organization.

“They tried to take away what I worked so hard for. I thank God they were not able to. I am a champion. I did that with my fists, not drugs. It hurt me when they tried to say I cheated.”

Star Boxing founder and president Joe DeGuardia is among the 18-member “Class of 2016” selected to the New York State Boxing Hall of Fame (NYSBHOF), sponsored by Ring 8, it was announced today. The fifth annual induction dinner will be held on Sunday, April 3, 2016, at Russo’s On The Bay in Howard Beach, New York. 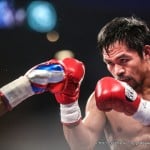 For boxing fans not already tired of seeing Manny Pacquiao (57-6-2, 38 KOs) fight WBO welterweight champion Tim Bradley (33-1-1, 13 KOs), they’ll get a chance to see the two of them face each other again on April 9th on HBO pay-per-view from the MGM Grand in Las Vegas, Nevada. Their promoter Bob Arum, 84, is saying that Pacquiao has made his decision and will be fighting the 32-year-old Bradley next in what will be a third fight between them.

While some fans are obviously disappointed in this selection due it being an already played out fight, it’s a fight that some fans are interested in seeing because they feel that Bradley has improved since his last fight against Pacquiao in 2014.

2015 was a very good year in boxing and we had many strong boxing prospects that will lead the way as we go into 2016. All the candidates below made the Real Combat Media Boxing Prospect top 5 list.

Junior middleweight boxer and philanthropist Boyd “Rainmaker” Melson has been nominated for Most Inspirational by Ring Magazine. 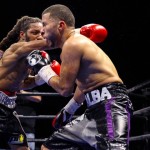 Douglas started to turn up the heat up in round two as he landed two hard left hooks that stopped De Alba in his tracks. De Alba was able to gain confidence in round three, as he was able to counter effectively against Douglas.