Lawrence Okolie crushed Krzysztof Glowacki to be crowned the new WBO Cruiserweight World Champion in just his sixteenth fight at The SSE Arena, Wembley, live on Sky Sports Box Office in the UK and DAZN in the U.S. and more than 200 countries and territories.

Okolie unloaded a devastating finishing punch to drop Poland’s Glowacki heavily in the sixth round, and referee Marcus McDonnell waved off the fight to confirm Britain’s newest World Titleholder’s coronation.

The unbeaten 28-year-old from Hackney had emulated the likes of Tony Bellew, David Haye, and Johnny Nelson, who previously held world crowns in the 200lb class,

“I don’t think it has sunk in yet,” said Okolie. “It’s nice hearing you say it. I’m happy. For me, it’s more of a relief. The potential has been there for over a year. I’m happy to get the victory. Now and forever, I’ll be a World Champion.

“I was just really focused on putting on a good performance. I’m physically solid and punch hard. I’m very fit, so that I can win on just those attributes at a certain level. I really focused on not rushing any shots because he’s very dangerous with counter shots, and he’s very heavy-handed. His jabs were very solid, so I had to be very meticulous in keeping the distance. It was a good clean performance.

“All of the British former World Champions wishing me good fortune really touched me – shout out to them. From every run that I ever did, losing all of that weight, deciding to take a risk, having my parents support me financially when I couldn’t afford to get the bus down to the gym for training. To see it all pay off with a World Title is a dream come true – never give up. We can go on from here. I need to keep pushing myself to prove myself as the best.” 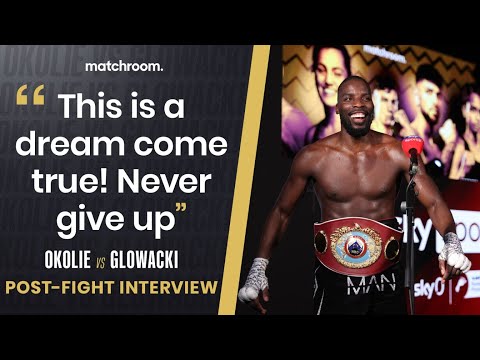 With one judge who had declared the fight a draw, scores of 98-93 and 96-95 were enough to see Cordina register his 12th straight victory in the professional ranks.

Cordina showed his class in the first half of the Super-Featherweight fight before somewhat fading as he was forced to settle for the points win in his first fight since 2019.

“I didn’t think it was close at all,” said Cordina. “I think he nicked one or two rounds, maybe three. I was comfortable, and I didn’t really get out of second gear. I let him work a couple of times throughout the rounds; maybe I shouldn’t have. I got a good valuable ten rounds out of that, and it’s something to build on. I’ll put on a better performance in my next fight.

“It wasn’t about just going out there and trying to blow him out of there. We knew he was tough; that’s why we chose him. Both of his losses before me were to European Champions. He’s gone the distance a lot of times; we knew he was durable. We got the rounds under our belt, and I felt I hurt him a couple of times. He was cute at times.

“I had 16 months out of the ring. He came to win, and that’s what I wanted. The hand felt fine; I let it go a few times. I didn’t want to overdo it. Tony told me to let the shots flow, so that’s what I did. I shouldn’t have any problems with my hand now. It’s time to build on that. If I want to be a World Champion, I have to get past people like Kourbanov. I didn’t really get out of second gear.” 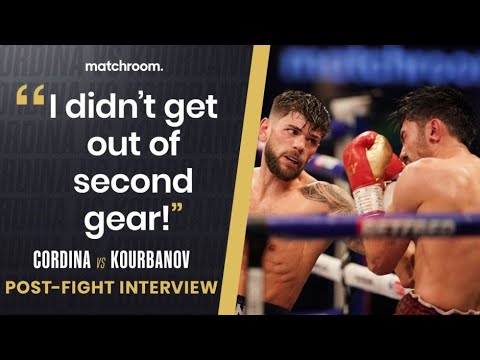 The Liverpudlian dropped Fortea with a stiff jab and then unloaded a huge right hand to floor the 30-year-old for the count.

“I surprised myself, I’m not going to lie,” said Fowler. “I thought it was going to go to points. I half play myself down. He just went 12 rounds with a Russian 18-0 killer, IBF No.1. I’m boxing at a much lower level. I’m the first one to admit that.

“I get a few trolls sometimes telling me that I’m boxing at the English Title level, and they’re right; it’s not my fault. I’m asking for these big fights. I haven’t been getting them. I’ve said to Eddie, ‘throw me in, mate, let’s see what I’m made of.’ Try and get me smashed and let’s see how I get on.

“He went down from a stiff jab which I was surprised about. I heard Shane say, ‘don’t rush it,’ but I knew there were ten seconds left, so I thought ‘f*ck it.’ I had to throw one bomb at least; luckily enough, it landed. He was actually better than I thought he was going to be.

“The first round was even, and in the second round, he caught me with a good shot. The jab was landing, but he was quite tricky. I started throwing to his body to slow him down. The finish was nice; it was a nice straight hand. I was glad he stayed down; it could have been a long night that.

“I could have cried in that ring; it means that much to me. My coach genuinely believes in me more than me. I’ve got the power in both hands, and I’ve got the ability. Metcalf and I is an unbelievable fight. I know he wants it; I’ve heard him talking about it. The whole city would be buzzing. Put me in with Garcia, and I’ll beat him too.” 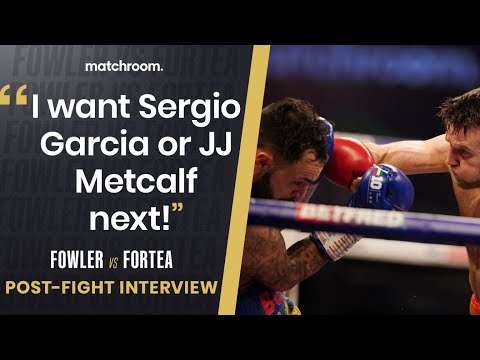 The 23-year-old gave glimpses of her talent, catching Gangloff with crisp combinations in a six-round points victory.

“It was definitely a learning fight for me for sure,” said Scotney. “Normally, in your second fight, you’re going to box someone that’s not coming to win. She wasn’t an idiot; she’d had five fights. I learned a lot from that, and there’s a lot to build on. I’m thankful for that.

“She was furious, wasn’t she. She’s as tough as they come, and I think I will benefit a lot from it. It’ll give me a kick up the backside. I’ve got a lot more work to put in, which I love doing. I’ve got a long way to go.

“It was my birthday this week; I’ve just turned 23; I want to push on, and I know I’ve got it in me. Now it’s time to start delivering. Women’s boxing is going from strength to strength. Hopefully, I can get on the undercard of one of the big ones in May.” 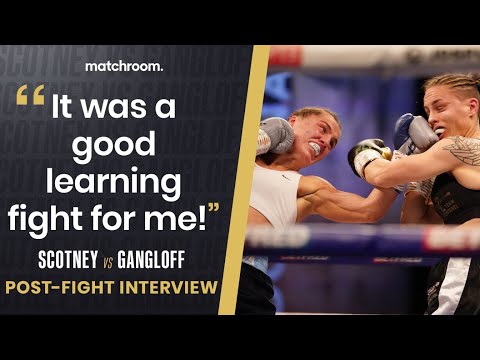 The Bournemouth contender, trained by Shane McGuigan, floored Ducar with a right hand in the fourth round, then sent him back to the canvas with a body shot.

But the Czech 31-year-old fired back with clubbing shots as Billam-Smith was made to work for a unanimous decision.

“I felt comfortable in there at all times, even when he had his little spurts,” said Smith. “It was perfect for me. I thought I was going to become the first man to stop him. I had him down a couple of times, but he was a tough, tough man. If I were going to rate it out of ten, I’d probably give myself a 6.5 or 7 out of ten.

“I’ve got plenty to work on in the gym, and I can improve a lot. The main thing was getting the win. I got that, and I’m happy. I hit him with a great body shot, I felt it really sink in, and then I dropped him to the head as well. He was dipping, and I was trying to hit him just over the top of his gloves. Those Czechs are tough and all respect to him.

“Unfortunately, I didn’t get the stoppage, but the main important thing was the win. I switched off a couple of times during the fight because I felt very comfortable. I let my hands get leaky probably two or three times during the fight, and he clipped me, but I wasn’t buzzed or hurt at all. I saw everything coming, so you can always take something out of the shots.

“I’ve definitely got improvements to make. That was my 13th fight, and I’m always about improving every day in the ring. I’m very grateful to have such great stablemates and such a great coach. I’d love to get the Tommy McCarthy fight as soon as possible.” 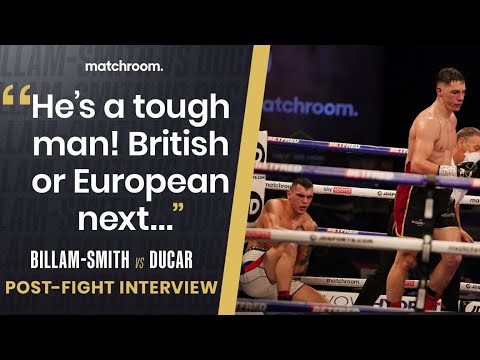 The Somalia-born boxer displayed her classy ring skills from the opening bell, nearly stopping Connolly with a sustained attack in the third round before completing another one-sided point win.

“Apart from the shiner on my face, I’m delighted,” Ali told Matchroom. “Regardless of what the scales said, I gave away about half a stone. I weighed-in in like two pairs of jogging bottoms so that I could match the weight. I felt the weight difference for sure, but I tried not to let her use her weight advantage against me.

“I tried to maintain the center of the ring as much as possible, which I did. I’m delighted with how I performed. She’s tough, but I got it done. Jobi always says you can’t beat the feet – and he’s right! I was always moving off from the double jab. We work a lot on footwork, and I feel like I did really well with my footwork.

“She was the one calling me out, saying that she wanted to fight me. Don’t then turn around and complain that you’ve had short notice. You’re a professional; if I were calling someone out, I’d be ready any time. She said she had a couple of days’ notice. I don’t know what to say about that, really.

“Everyone is nervous before getting in the ring because it means so much to you. You want to prove yourself, and you want to show all of your friends and family that are watching at home that you’re worthy of watching. You want to put on a good performance and have a good fight. The moment that bell went, all of the nerves went, and I was razor-focused on getting the job done. The Olympic dream is still alive, and I’m still hoping to go and hopeful of competing. I’m still hoping to progress in my professional career.” 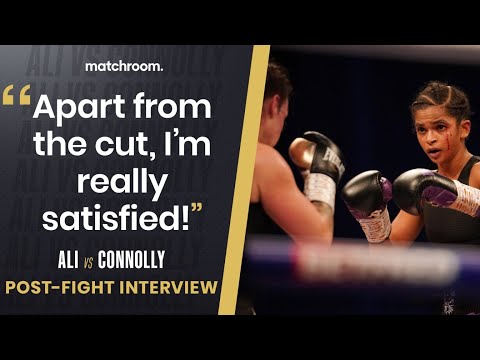 Stretford’s Bradley Rea maintained his unbeaten record by stopping Lee Cutler inside the opening round to move to 10-0 (4 KOs) in the first fight of the night.

With Ricky Hatton in his corner, the 23-year-old Middleweight prospect flew out of the blocks, unloading punishing shots on his opponent from Bournemouth.

The Steve Wood-managed youngster had been out of the ring for over a year due to the pandemic but showed no signs of ring rust as he put Cutler down three times before the referee waved off the contest.

“I’m over the moon,” Rea told Matchroom afterward. “It has been a long time coming. It was a long camp; it’s been 12 months. I’ve wanted to box on shows like this my whole life. Hopefully, I can get on these shows a bit more regularly after that performance.

“Before this, I’ve only had three stoppages, so I think he thought I wasn’t going to hit hard. It’s something that we’ve been working on, planting my feet. I’ve been working on a bit of strength and conditioning stuff while we’ve had this year off. It has been quite beneficial to me, I think. I’m feeling strong at the moment,

“I had a great camp. I’ve been hurting people in the camp. I knew if I landed cleanly, I’d hurt him. I’m in no rush; I’m still only 23. I want to be in fights like this. In the build-up to this fight, I’ve had that fear factor that I’ve not had in my previous fights. I knew that if I weren’t on my game, I would have lost tonight. Lee is a good kid. I just found gears that I didn’t know that I had. Hopefully, in fights to come, I’ll find even more.”