Two of the greatest fighters in boxing history, Willie Pep, and Sugar Ray Robinson are now and always will be giants of the sport; almost mythical boxing masters who even the most casual of fight fan has heard of.

Both men were of course very, very real, their careers well-documented and paid tribute to. In the case of Pep, however, there was one famous myth, often repeated, that some still believe the be true all these years after its birth.

The legend, or myth, says that defensive genius Pep once won a round without throwing a single punch. For years (and maybe even now) fans lapped this one up.

It turned out it was Pep himself who created the myth, with Pep stating to a ringside reporter/photographer before his July 1946 fight with Jackie Graves that he was going to win the third round without slinging a single shot (Pep never made good on his boast but he dominated and won the fight, scoring an eighth round TKO).

Another story about Pep which is actually true is the one that tells us he once fought Sugar Ray, this despite the fact that Pep was so much the smaller man. 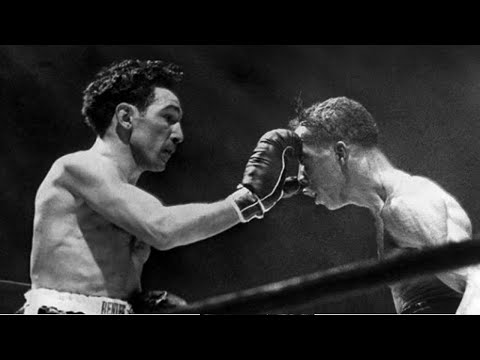 The two men met as amateurs in 1938, the bout taking place in the attic of a feed store in Norwich, Connecticut. Pep never knew who he was fighting until some time later, Robinson boxing under another name.

Read:  On This Day In 1942: The Epic Sugar Ray Robinson Vs. Jake LaMotta Rivalry Begins

Pep gave away 25 pounds in weight to the original and far and away best Sugar and he lost a decision. Pep later stated how his unknown opponent had been “all over me.”

Both Pep and Robinson went pro in 1940, both men becoming kings of the ring and dazzling the world with their skills. Imagine being one of the fortunate people in attendance at that amateur fight in 1938! Imagine two of the greatest fighters of all-time meeting each other long before they became as great as they did.

Pep went on to compile an amazing 229-11-1(65) pro record. Robinson’s final numbers are also amazing 174-19-6(109). It’s up to you when it comes to who was the overall greater fighter of the two. Both men did things in the ring that will never, ever be done again.

Pep had his savage rivalry with Sandy Saddler, Robinson had his epic series with Jake LaMotta. Together, these two almost unbelievably great fighters did so much to make the sport of boxing the magnificent thing it once was.