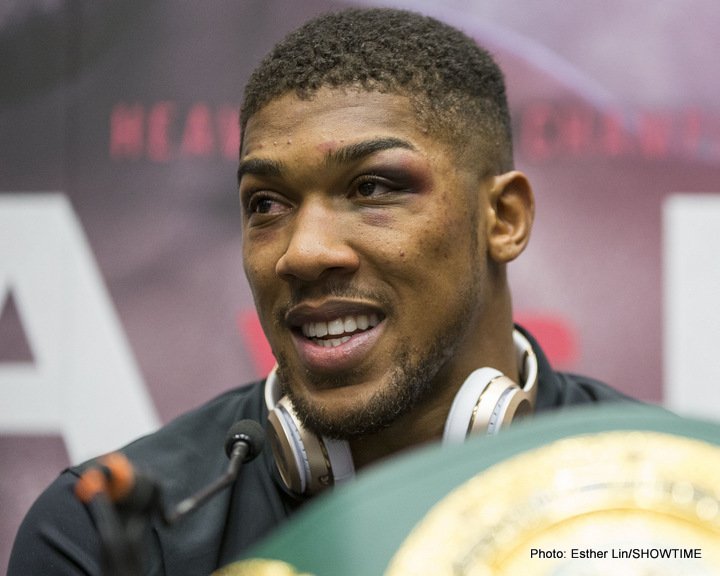 And Hearn, in speaking to Sky Sports earlier today, stated how both he and his fighter have every intention of complying with both orders. Hearn also responded to WBC heavyweight king Deontay Wilder calling out AJ on social media a few hours ago, daring Joshua to face him in a big unification clash this November.

Hearn stated how Wilder is basically blowing smoke, calling out a fighter he knows cannot fight him right now. Hearn spoke of the IBF ruling, which states how it must be Pulev next, and he said that Joshua, not wanting to lose either belt, will face Ortiz after he’s dealt with Pulev.

If next summer Wilder is still WBC champ, Hearn said, “Joshua will relieve him of it” then.

Wilder, who is expected to return to action in November, knows he cannot face AJ next, or anyone else for that matter, lest he run the very real risk of being stripped of his WBC belt for not fulfilling his own mandatory obligations – against (groan) Bermane Stiverne. No, this is not a good fight at all, but rules are rules and politics are politics.

Wilder needs to keep his green belt and he knows it, so it can’t be Joshua – in a fight we of course would all love to see – next. But as Hearn said, it can happen in 2018.

But to add to the confusion regarding Joshua and his two belts, upon writing this piece, news broke stating how AJ is now willing to vacate his WBA belt and just concentrate on the IBF side of things.

It all goes to show how very, very hard it is for any heavyweight, regardless of talent, to become the undisputed champion.

It will be interesting to see who unbeaten southpaw Ortiz gets matched with in a fight for Joshua’s vacated strap should he indeed vacate. This would be a shame because Joshua Vs. Ortiz would be one fascinating clash.