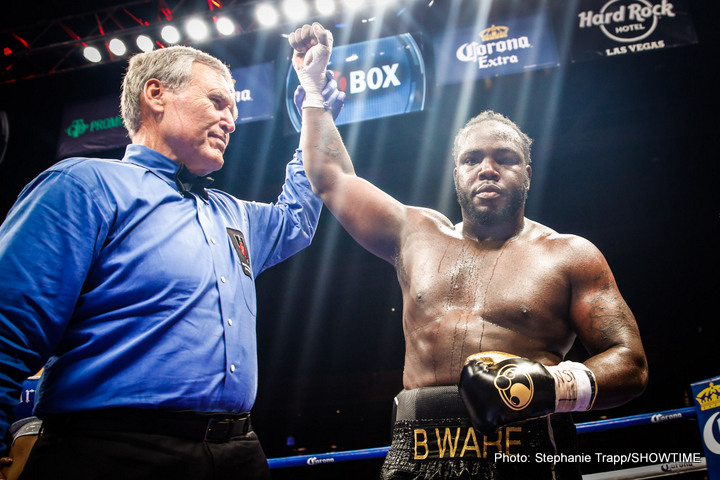 ISSUED BY WBC BOARD OF GOVERNORS

On November 11, 2016 VADA notified the WBC that Bermane Stiverne’s anti-doping test taken from his November 4, 2016 sample (the “Test”) pursuant to the WBC Clean Boxing Program (“CPB”) yielded an adverse finding for the banned substance methylhexaneamine (also known as dimethyamylamine or “DMAA”).

DMAA is sold currently as a dietary supplement and as an ingredient is various energy preparations. Due to safety concerns, DMAA has been temporarily removed from military stores in the US. Its use has been linked to several reports of serious, life-threatening side effects which appears to be the main reason why the World Anti-Doping Agency added DMAA to its prohibited substances list in 2010.

Upon learning of Stiverne’s anti-doping test result, the WBC immediately started an investigation of the: (1) circumstances surrounding the adverse finding; and (2) history and properties of DMAA. The WBC considers those steps necessary to achieve a ruling consistent with the WBC Rules and Regulations and with the WBC CPB Protocol.

Throughout the investigative process, Stiverne has been extremely cooperative and 100% forthcoming. Stiverne informed the WBC that on the day of the Test, in order to facilitate urination, he took a dietary supplement called SUPERPHARM in front of the sample collector. He reported the ingestion of that supplement in the Declaration of Medication Use section of the doping control form he filled in connection with the Test.

Stiverne also reported that he ingested the supplement twice the same day and that he took it because the supplement staff at EOS Gym in Henderson, Nevada recommended it to him. He was looking for a product that would help him with post-work out fatigue. Stiverne is fully aware of the gravity of the mistake he made by taking an off-the-shelf supplement without investigating its ingredients in detail. Stiverne also realizes that he is ultimately responsible for anything that he ingests. In short, he now realizes that he was very naïve by following a store’s recommendation of an off-the-shelf supplement while being ignorant of its contents.

Based on detailed research and information gathering, the WBC finds as follows:

1. Stiverne agreed to participate in the WBC CBP in connection with the Bout.

2. DMAA is a banned substance under the WBC CPB by virtue of its inclusion in VADA’s List of Banned Substances.

3. The anti-doping test of sample collected from Stiverne on November 4, 2016, tested positive for DMAA.

4. Stiverne admitted taking a dietary supplement that unbeknownst to him, included DMAA as an ingredient.

5. The WBC is not aware that Stiverne has ever tested positive for any banned substances.

6. There is no evidence that Stiverne intentionally or even knowingly, ingested a banned substance with the purpose of enhancing his performance in any fashion.

8. As the CBP’s Results Manager, the WBC has complete discretion as to the extent and nature of any penalty it imposes upon Stiverne.

V. WBC BOARD OF GOVERNOR’S RULING

The WBC Board of Governor’s ruling is based on the facts as known to the WBC at the time of the ruling. Based on the adverse finding of Stiverne’s “A” November 4, 2016 sample, and taking into consideration Stiverne ingested a dietary supplement that contained DMAA without knowledge that he was consuming a banned substance, WBC has ruled as follows:

a. The WBC CBP considers Stiverne’s adverse finding a first violation of the WBC CBP under its Protocol;

b. The WBC will not withdraw its sanction of the Bout at this point in light of the fact that there is sufficient time to put in place preventative and remedial measures to protect the health and safety of the Bout’s participants;

c. VADA, pursuant to the WBC CBP, will design a specific testing protocol for Stiverne at Stiverne’s own cost and expense. The VADA-designed protocol will commence as soon as feasible after this ruling and will continue until after the Bout and for six months thereafter;

d. In the event there is an adverse finding concerning any of Stiverne’s samples during the time prescribed above, the WBC shall immediately: (1) suspend Stiverne from participation in any WBC-sanctioned events indefinitely; (2) divest Stiverne from any WBC title or any other rights he might have at the time; and (3) impose any and all available penalties under the CBP without further inquiry;

e. The WBC shall work with Stiverne to design a program consisting of 40 hours of community or social work in the area of doping prevention education to young athletes; and

I am a fan of the Dallas Cowboys, and today is a good one after a dramatic win over our Archrivals Pittsburgh Steelers. It has been way too long since the Cowboys have had any success: 20 years since winning a Superbowl, and many seasons waiting for something to happen. Today’s team is lead by two rookies, the quarterback and running back, and everyone feels part of the team with high motivation, and all is reflected in their 8-1 record.

This has to be a great motivation for all athletes from all sports. Paradigms need to be broken, things need to be moved around, and that is precisely how a rookie dreams of one day becoming the future star. In boxing, there are certainly those out there who dream of being the next WBC champion, to conquer the world, conquer glory and fame, and all that comes with such success. I see Tevin Farmer anxious to get notoriety, I see Carlos Balderas anxious to debut in pro boxing. Rocky Hernandez wants the big fights even he is only 18 years of age. I see women waiting for that crack in U.S. market . Well, it is all possible – keep working hard, see yourself as the Dak Prescott or Ezekiel Elliott of the Cowboys, and make it happen!

The WBC’s 54th Annual Convention is fast aproaching, and I am so exited about it! The special memorial that has been prepared for The King of Boxing – The Greatest, Muhammad Ali – is going to be spectacular. I have been in communications with so many champions who will be attending, many of the current champions and many of the all-time heroes: The Mayor of Kiev, our own Vitali Klitschko, Marvelous Marvin Hagler, Naseem Hamed, Julio Cesar Chavez, Roberto Duran, Jeff Fenech, Evander Holyfield, Roy Jones Jr., and so many more champions who will all be honored by the WBC.

Our medical committee will have some very important presentations, including our program from UCLA with Dr. David Hovda, who will update the works on prevention of injuries; the Clean Boxing Program special presentation and action plan to make a stronger awareness program to help educate athletes on PEDS; the Women’s Boxing program, which is a reality. Judges and referees will have their annual certification seminars, which includes some important measures to find uniformity and excellency in officiating .

For the first time at our conventions, there will be a panel of boxing trainers who will discuss in an open forum some of the most important aspects of boxing and its relations in the gym. Weight monitoring, hand wrapping, sparring pros and cons, and how to monitor and limit such, rehydration, etc.

The Talent Night is all ready and it promises great fun. The “Low Blow Band” is ready to perform along with Russ Anber’s magic, the performances of Mia St. John’s daughter, and Roberto Duran’s son.

One of the most important topics is, of course, mandatory title defenses for each division. As 2016 is ending, we see with great enthusiasm the fights which have been confirmed for the first quarter of 2017 and they create huge excitement: the Roman “Chocolatito” Gonzalez vs. Carlos Cuadras rematch, Dejan Zlaticanin vs. Mikey Garcia, the Badou Jack vs. James Degale unification with the winner fighting Callum Smith, the Gennady Golovkin vs. Daniel Jacobs unification, and the recently announced blockbuster Danny Garcia vs. Keith Thurman unification.

I am very optimistic about the future of boxing. There is important activity in many areas of the world, boxing is booming in the U.K. , and there are several regional heroes who have brought people back to follow our great sport. I am certain that all who have interest in boxing are determined to do the right thing and make sure the fights that the fans want to see will be made – fans are the ones who own the sport and fighters are the ones who must make the best of their years in the ring.

Amateur boxing needs to find a new path, and this will happen one way or another. Amateur boxing exists, and millions of kids need to have such platform to form their future.

I can’t wait to see the WBC family together at the Diplomat Beach Resort in Hollywood, Florida, on December 11th to create together the plans for the future of boxing .

Thank you, and I welcome any comments, ideas or suggestions at contact@wbcboxing.com.