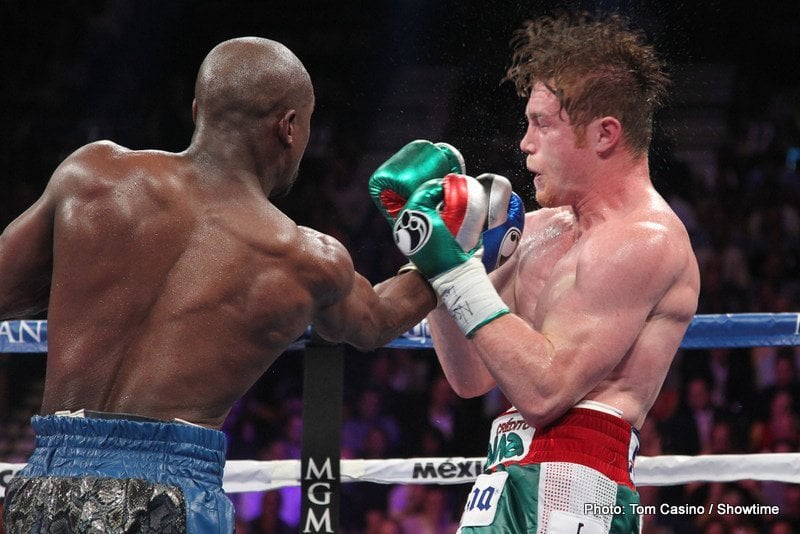 Ace trainer Virgil Hunter is talking a very confident game ahead of his fighter Amir Khan and his up against it challenge of middleweight king Saul Alvarez. Hunter, who has now been with Khan for five fights, since beginning working with him towards the end of 2012, says he will be looking at a tape of the Floyd Mayweather Junior-Alvarez fight from September of 2013, which Mayweather won via comfortable points decision (barring the simply baffling card of one judge!).

“Amir is bigger than Floyd, longer and at this time, I know when he’s in good shape, his tank is much fuller because of his age,” Virgil said. “But definitely that’s the fight you want to look at and see where you can capitalise on, but also add a few edges that maybe Floyd didn’t do that night because he had control of that fight from very early. Amir also possesses enough pop to keep him honest. He is focused. When I tell him what can get him in danger or create a problem I think he has a very great chance of winning the fight.”

Most people, when looking at what can get Khan into trouble in this upcoming fight, point to the sheer size, strength and power of Alvarez. As fine a trainer as Hunter is, the only way Khan will be able to take these big physical advantages away from Canelo will be by putting on an awe-inspiring, non-stop, near-perfect boxing clinic for each of the 12 rounds, where Khan does not get pulled into anything resembling a physical fight and does not get caught either coming in or pulling out. But can Khan, who has never been incredibly hard to hit and who has very often been involved in fights with plenty of exchanges, do this?

As for Khan being bigger and longer than Floyd: looking at BoxRec, the measurements of the two men are almost identical, with Khan standing just half-an inch taller than Mayweather at 5’8.5.” as for reach, Floyd’s is listed at 72,” Khan’s is listed at an inch shorter. Khan is very thick-set and has bulked up from lightweight to welterweight and can maybe add even more effective muscle mass as a 155-pounder. But, and let’s never forget, above all else, Mayweather is/was a very special talent, especially defensively. As good a trainer as Hunter is, he doesn’t have as sublime a defensive wizard to work with in the lightning fast but occasionally open and hittable Khan.

Khan’s game-plan against Canelo will obviously involve lots of speed, most likely used in raids where he gets in, throws a quick burst of shots and then gets out before the slower middleweight champion can respond. But as the fight goes on, Canelo’s physical advantages will become a factor, or so the general line of thinking goes. Maybe Hunter sees something we don’t?

What is not in doubt is the fact that the fight set for Cinco de Mayo weekend is a hugely intriguing and fascinating prospect. As promoter Oscar De La Hoya said recently, this fight reminds him of his at the time shocking match-up with Manny Pacquiao. And we all know the quicker, faster fighter won that one (albeit against a past his best and badly weight-drained Oscar).