Former British heavyweight champion Trevor “Hughroy” Currie sadly passed away a few days ago, January 23rd, at the age of just 61. Not too many tribute pieces surfaced – although the always excellent Boxing News team produced a fine tribute to the Jamaican-born warrior.

Curry had a pretty notable career, during which he faced big names such as, Gary Mason, Derek Williams, Glenn McCrory, Horace Notice, Adilson Rodrigues and, in perhaps his biggest win, Alfredo Evangelista.

Curry fought from 1981 to 1989, compiling a 17-11-1(7) record. It was in April of 1984 when Curry upset former world title challenger Evangelista via decision. While in September of 1985, Curry defeated Funso Banjo in a return fight to win the vacant British heavyweight title.

Curry lost the British title in his first defence, when he was stopped inside six rounds by Horace Notice; the April 1986 fight also contesting the vacant Commonwealth title.

A good, strong and game heavyweight who was willing to travel to fight (Spain, America), Curry had the unfortunate task of fighting for recognition at the time of Frank Bruno and “Big Frank’s” enormous popularity.

Curry did bag himself some good wins, however. Not an especially hard puncher, Curry nevertheless managed stoppage wins over a pre-cruiserweight version of Glenn McCrory (McCrory going on to win the IBF cruiser belt), while he also stopped Dave Garside and defeated Proud Kilimanjaro.

Curry was stopped some seven times, with Joe Christie, Martin Hardman, Notice (twice), Adilson Rodrigues, Mason, and, in his final fight, this a European and Commonwealth title challenge, Derek Williams all halting Curry. 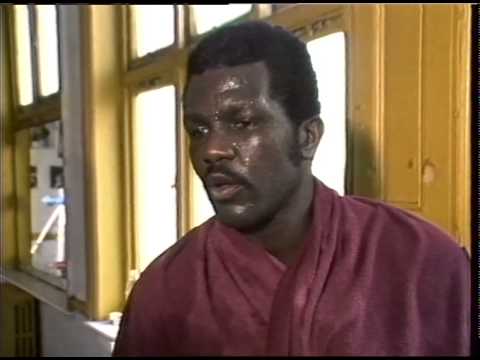 Curry had a bouncy start to his career, winning just three of his initial eight pro fights. But the London-based big man was a determined fighter and he went on to enjoy a good spell in the mid-1980s.

British fight fans of a certain age will no doubt remember watching Curry fight on terrestrial TV. Overall, despite his bumpy start and his shortcomings, Curry achieved quite a lot during his 29 pro bouts.

Our condolences go out to Curry’s family and friends.