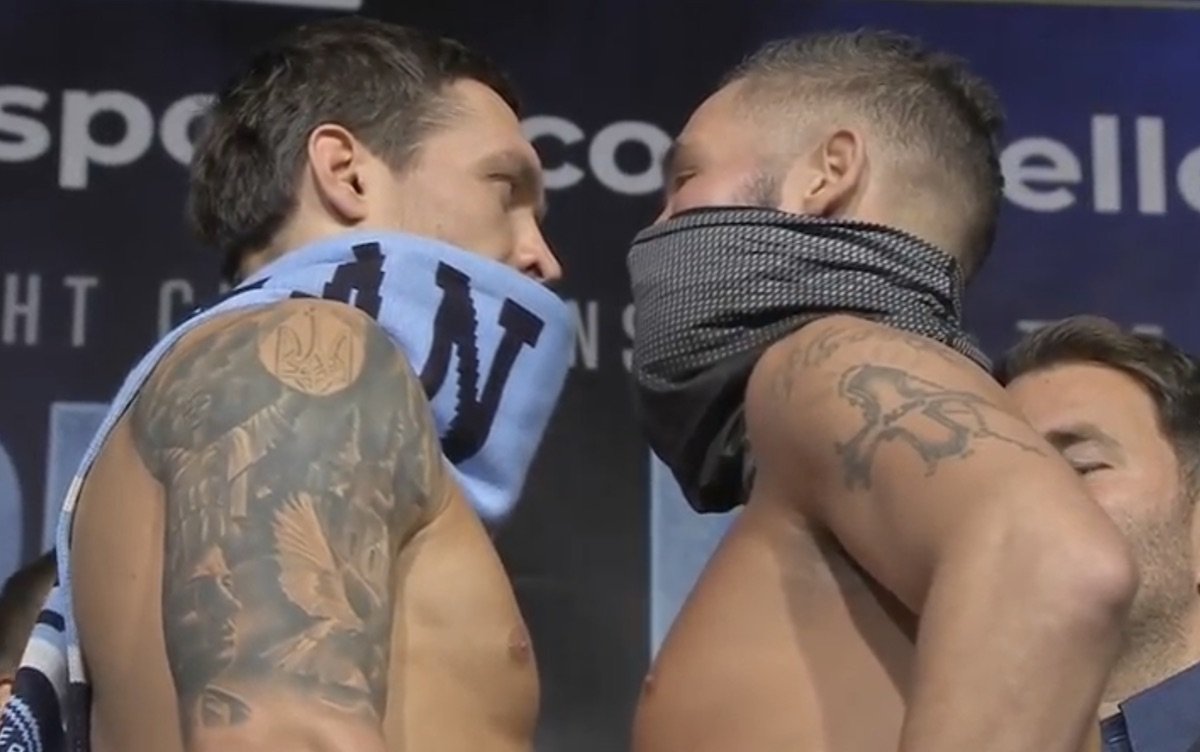 Tony Bellew On Going Eye-To-Eye With Oleksandr Usyk At Today’s Weigh-In: It’s Like Two Maniacs Looking At Each Other

The hard work has evidently been done in the gym, with both Oleksandr Usyk and Tony Bellew looking in absolutely great shape at today’s official weigh-in – Usyk, the four-belt cruiserweight king tipping-in at 198.4 pounds and challenger Bellew coming in at 199.4 – and now we await a great fight. Bellew, looking to be in the best physical condition of his entire career, has promised us not only a great fight, but also “a war – one of the greatest fights you’ve ever seen.”

“We are going to punch the f**k out of each other,” Bellew promised.

Bellew, always able to come out with some great quotes, said he and Usyk going eye-to-eye was something akin to the classic movie ‘One Flew Over The Cuckoo’s Nest.’ And these “two maniacs” are going to give us a fight we will “never forget.”

“I feel fantastic, fat boy’s in shape,” Bellew said after weighing-in, as quoted by The Mail. “I made weight, I told you I would. Tomorrow night, I’m going to war. He’s in the deep end, I know exactly where I’m at. It’s like something out of that Jack Nicholson film, two maniacs looking at each other. You’re going to get one of the greatest fights you’ve ever seen. He’s a formidable champion, pound-for-pound one of the kings of the world. I’ve been the underdog so many times, they might as well start calling me the overdog. Tomorrow night I’ll be crowned the king of the world.”

Despite his understandable confidence – Bellew has of course carved out quite a reputation as a man who upsets the odds – tomorrow’s challenger is seen by almost all experts as the outsider. A recent RingTV.com poll asking twenty experts their prediction saw all 20 pick Usyk. Not that this will bother Bellew in the slightest. Possessing enormous self-belief, Bellew is his own man. But then so is Usyk.

Who will win? Will we see a war, or might southpaw Usyk put his incredible skills to use and box, box, box? Bellew, by his own admission, cannot outbox Usyk – he has to make it a war. Maybe he can, maybe he can’t. But the pick has to be for Bellew to win. It would be heartbreak for Bellew if he did lose this, his “last fight.” But as anyone who saw ‘One Flew Over The Cuckoo’s Nest’ knows fully well, happy endings can be few and far between.

Usyk by clear decision as a determined Bellew sees it to the final bell.