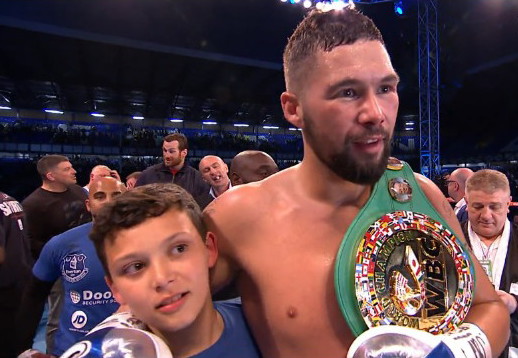 Underdog Tony Bellew (27-2-1, 17 KOs) came into tonight’s fight against #1 WBC Illunga Makabu (19-2, 19 KOs) as a slight underdog, but he came out the champion and the new WBC cruiserweight belt holder after stopping the South African in the 3rd round at the Goodison Park Stadium in Liverpool, UK.

Things weren’t looking good for the 33-year-old Bellew initially after he got greedy in the 1st round and was put on his backside by a scorching left hand to the head from Makabu. Bellew regrouped well in the 2nd and 3rd round to come back to dominate and stop the 28-year-old Makabu. In the final sequence in the 3rd, Bellew landed a hard right to the head of Makabu that caused his legs to shudder slightly.

Makabu instinctively backed up to the ropes and covered up. That was a big mistake as it turns out, because Bellow stayed on top of him and unloaded everything but the kitchen sink until Makabu slid down on the canvas. The fight was being stopped by referee Victor Louglin even before Makabu was officially down because he out cold while leaning against the ropes. The last two right hands that Bellew threw were with Makabu unconscious and defenseless.

After the fight, Bellew said, “I am the best cruiserweight in the world. Denis Lebdedev, he came come and get it.”

I’m not sure that I agree that Bellew is the best cruiserweight. He was the best fighter in the ring tonight against Makabu, but there are many other top cruiserweights besides Makabu that Bellew needs to prove himself against. Lebedev , Marco Huck, Oleasandr Usyk, Krzystof Glowacki, Murat Gassiev and Mairis Briedis and Beibut Shumenov are guys that Bellew would still need to fight and beat for him to say conclusively he’s the best in the cruiserweight division. I think could beat some of them, but it would be very hard for Bellew to beat Usyk, Gassiev, Lebedev and Glowacki. Those guys look very hard to beat.

Even the injured Grigory Drozd would be a handful for Bellew. Unlike the flawed Makabu, these are very polished fighters with a great deal of skill and power. It’s okay for Bellew to say he’s the best fighter in the cruiserweight division in order to pump up himself and his fans, but he only proved that he was better than Makabu, whose best name on his resume going into this fight was the 45-year-old Glen Johnson. Makabu was inexperienced and it showed tonight.