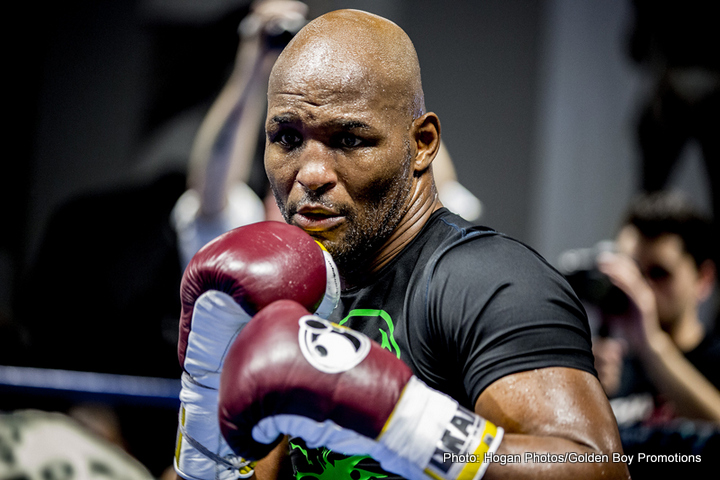 Rodney Dangerfield made the catchphrase “I don’t get no respect” famous. Bernard Hopkins must be thinking the same.

This coming weekend Bhop goes up against hard hitting WBO Lt. Heavyweight Champion Sergey Kovalev, which is an intriguing matchup. Can the hard hitting Kovalev catch Bhop and make him pay or will Bhop once again figure out how to win? The predictions are pretty much 50/50. There are those that think Bhop can’t keep betting against Father time and win, but truth be told we have seen him do this time and time again and there lies my pet peeve. Dislike him for his antics outside the ring and his ranting and sometimes ill advised comments (I will never let a white boy beat me), but please give this man credit for his accomplishments inside the ring. Only that alone is cause to give him benefit of the doubt. At 48 he is taking on the most dangerous guy in the division hands down, something Stevenson didn’t do. Bhop has ducked no one. Some other self proclaimed ATG can take a page from his book.

I agree that one has to wonder when will his time be up? He is not superhuman, though he seems to think he is an alien. If Father Time hasn’t clocked him, I think he will find a way to win. One very important concept that is always overlooked and possibly because he does it so easy, is his uncanny ability to take that thing, that one thing that is so key to your success and use it against you. We have seen it time and time again, yet he gets no respect for this. I have studied Bhop extensively and he is a master of this. I agree, at times it seems unexciting, but I see it from another angle, that he is able to do it. Those that claim he holds all the time, I beg to differ. Did he hold Tarver, Pavlik, Trinidad or Pascal? As I mentioned I have watched him extensively and he is able to do this with footwork. If you are a puncher, he keeps you at angles and distances that make it difficult to catch him. After rounds of cocking and uncocking because he has once again placed you in an undesirable position, you now become impatient and start simply throwing out of desperation and then he has you. You see every weapon can be neutralized and Bhop knows this.

A rundown of Who’s Who on his fight list show fighters who have fallen into this trap. DLH, Trinidad, Winky Wright, Tarver, Pavlik, J Taylor (even JT said after the 1st fight he thought he lost), Pascal, Calzaghe (could have gone either way actually). The only exception would be the great Welshman Calzaghe who in my opinion fought Bhop the best by simply throwing as many punches as possible from all angles. But Calzaghe is an ATG and was in super condition. Can Kovalev do this? I sincerely doubt this. There are those that claim Kovalev is big hitter, I agree, but has Bhop not been in with so-called big hitters before?

Kovalev will need to throw a lot of punches and be hyper active as that is the ONLY way to beat Bhop. But he knows that this has a dangerous element, as Bhop will look to establish a crawl pace and outbox and neutralise Kovalev taking the middle to late rounds. If he tries to pace himself he will be playing into Bhops plan, so you see Kovalev has a catch 22 problem. There is a ray of hope. In Kovalev’s corner is John David Jackson. Jackson knows Bhop all to well. They have stood in the ring together with Bhop winning by TKO in 1997 and he has been in many of Bhops training camps in the past. So Jackson has been in the kitchen so to speak and should have useful tips for his fighter, but on fight night Jackson won’t be in the ring with him.

The age thing Bhop also plays to his advantage believe it or not. He makes the other guy THINK, YES IM OLD. He repeats this enough times at press conferences and the opponent thinks I’m in with a senior citizen, only to discover on fight night, this guy isn’t slow and he hits hard, now its playing with your mind: how can I lose to this old man.

Bhop knows how to break down opponents psychologically. Let me give you facts. The names I mentioned above were an astonishing W237 and L10 when they met Bhop. The losing average was 4.2%. Guess what it was AFTER they fought BHop….. W28 and L14. It jumped to 50%! That’s not a coincidence. It does something to you emotionally and psychologically when that thing you had been doing and banking on to give you the success you had in the past comes up short and in such a wide audience for all to see, it does something to your self-confidence.

If Kovalev loses or evens squeaks out a close decision, mark my words he won’t be the same fighter ever again. There lies the pressure. Kovalev needs to win and win big. If he doesn’t, he is scarred. If Bhop loses, we will say well nice run he was 48 and if he wins…………..oh well………..he won’t get the RESPECT.