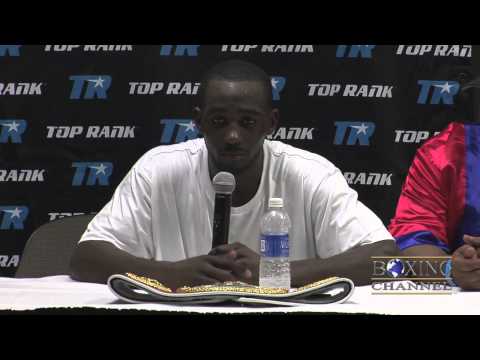 Crawford was quickly rewarded with a couple of lead rights from the Cuban known as “El Cicion de Guantanamo”. Crawford’s move seemed to be anything but a beneficial transition. It appeared to be a costly miscalculation. Through four rounds, it looked to be the beginnings of a long night for the hero of the Plains. The crowd could be heard chanting “Crawford Crawford”. It was as though they were gently nudging him awake.

Gradually, Crawford started landing his right jab over Gamboa’s low left. Now, what initially appeared as no advance, started to surface. That was Crawford height and reach advantage. All of a sudden Gamboa needed to also leap forward in hopes of landing his own shots, and when he missed he was getting tagged with sharp counters from Crawford, especially the right hook and straight left to the body.

The Cuban sensation seemed a little flustered, and confused. He wondered what happened to his edge in speed? It wasn’t much more than a blink of the eye, but it had enabled him to win the early rounds. By the end of the fourth round, Crawford’s task seemed to be growing. He had dug himself a pretty big hole on his own Omaha Beach. HBO analyst Roy Jones, Jr., expressed his displeasure with Crawford’s actions. He felt as though Crawford landed on the wrong beach, and was going to suffer too many casualties, or counters as a result.

When Crawford got tagged with a couple of Gamboa rights, it appeared Roy was going to be proved correct, but to the sharp eyed observer, Crawford seemed unaffected by the punches. He stayed calm and started turning the tide. All of a sudden the transition was complete, not only from righty to lefty, but also from a slightly slower fighter, to a taller and longer fighter. All of a sudden Crawford became the more heavily armed soldier. He displayed more weapons, a telling jab, a punishing right hook, and shots from both hands to the body. Now it was Gamboa’s turn to transition.

However, Gamboa’s change was more of a involuntary handover of control. He no longer was enjoying that flicker of speed that had been providing him with the ability to get in and out unscathed. Now he was not only coming up short, he was getting tagged to boot. He found himself lungeing forward, only to find himself off balance with his misses. He would try to fall into a clinch to protect himself. But now the size difference became even more apparent. The taller, bigger Crawford started using his advantage to muscle and weigh down the smaller Cuban.

In the fifth round, a particularly good counter right hook deposited Gamboa on his breeches. Not to worry, Gamboa had been down before, and he always regained his feet and control of the fights. However, this time the punch to his left temple seemed to have a more lasting effect. Crawford wisely added a few good body shots to accentuate his emerging dominance. Gamboa eagerly awaited the bell.

The minute rest in between rounds seemed to be all Gamboa needed. He came out of his corner with renewed vigor. His lightning quick hands unleashed several combinations. It appeared Crawford’s good fortune might be disappearing. However, he stayed calm. It was a bit worrisome. Where was his fire, his emotion? Instead Crawford stayed relaxed, unemotional. He was calm, cool and collected.

Crawford proved the fifth round knockdown was no fluke. It wasn’t just a stroke of good fortune, a lucky punch. No, Crawford’s beneficial transition continued. Now there was no doubt about who was in charge. Crawford’s exhibition of power and skill exposed Gamboa’s weaknesses. Now, Gamboa was paying the penalty for keeping his left hand low. He was started to absorb more and more jabs and counter right hooks.

Crawford didn’t forget the body either. When Gamboa would rush in, his charge would be met with a straight left to the body. Gamboa’s confident look changed to one of worry. In all of his twenty-three victories, he had never experienced this level of mayhem. He’s been hit before, even knocked down before, but it was as if all hell broke lose. He was in big trouble and he knew it. To punctuate things, Crawford dropped him again in the eighth. Then in the ninth, he went down twice more.

Crawford continued to show his abilities. After he fired of the knockdown blow, he would quickly follow it with one or two more shots as Gamboa would fall. The final punch of the fight was a beautiful uppercut to punctuate the transition. Referee Genaro Rodriguez made matters official by stepping in to signal Gamboa’s defeat. It was 2:53 of the ninth round. There was no need for the judges to get involved. There was no danger a hometown decision might tarnish Crawford’s victory. No, he made sure there was no doubt about the identity of the victor. Now the world knows Terence “Hunter/Bud” Crawford. He has proved himself to be a great fighter, and he defended his WBO world lightweight championship in grand fashion.