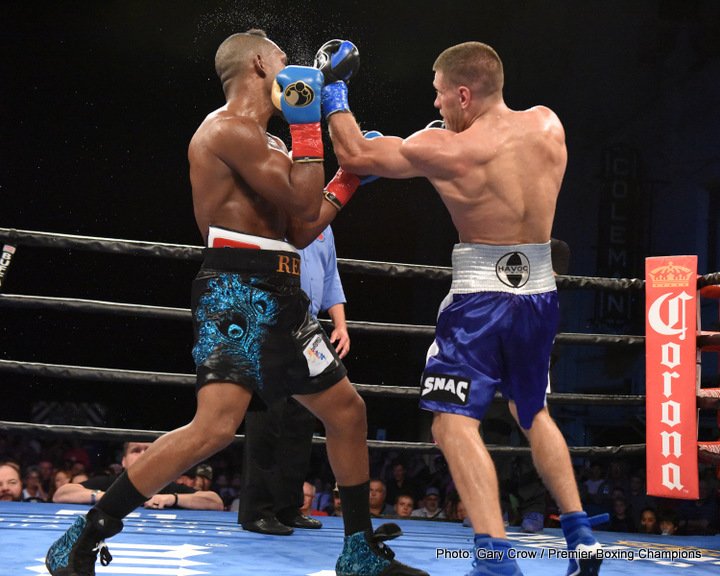 Trainer Andre Rozier would like to match his fighter #1 IBF middleweight contender Sergey Derevyanchenko (11-0, 9 KOs) against either unbeaten Jermall Charlo (26-0, 20 KOs) or IBF super middleweight champion Caleb Truax (29-3-2, 18 KOs) in his next fight.

The 2008 Olympian from Ukraine Derevyanchenko, 32, recently beat Tureano Johnson by a 12th round knockout to become the IBF mandatory challenger to IBF middleweight champion Gennady ‘GGG’ Golovkin on August 25. Derevyanchenko hasn’t fought since, and he needs an opponent for the first half of 2018. Charlo or Truax would be ideal for the hard-hitting Ukrainian to fight if their up for the task.

“We’d be more than happy to have Derevyanchenko fight new 168-pound IBF champion Caleb Truax,” Rozier said to Michael Wood of RingTV.com. “It’s the same sanctioning body, the IBF, and it would be an entertaining fight with Truax. And if not that, we’d be happy to dance with Jermall Charlo any day of the week!”

Charlo, 27, is planning on fight Hugo Centeno Jr. for the interim WBC middleweight title in early 2018, so he’s probably not going to be able to take the fight with Derevyanchenko. Charlo is already the World Boxing Council mandatory challenger to Golovkin after his 4th round knockout win over Jorge Sebastian Heiland last summer on July 29.

Charlo is just waiting to jump through one last hoop by fighting for the WBC’s interim belt against Centeno Jr. until the fight with Golovkin is ordered by the sanctioning body. If Golovkin vacates his WBC, WBA, IBF, and IBO titles to move up to 168 in 2018, then Charlo will likely be elevated to the full WBC middleweight champion status, as long as he beats Centeno Jr.

Truax, 34, has a good chance of fighting a rematch against former IBF 168 lb. champion James DeGale in his next fight. Truax beat DeGale by a 12 round majority decision on December 9 in London, UK, and there’s a very real possibility the two can face each other again. DeGale wants the rematch, and there was a rematch clause in the contract for their fight earlier this month.

Derevyanchenko needs to stay busy, but he probably will need to go in a different direction from Truax and Charlo. Those guys have a full plate already, and they’re not going to want to be sidetracked by facing a tough fighter like Derevyanchenko. A good option for Derevyanchenko’s management would be to try and get one of the following middleweights to face him: