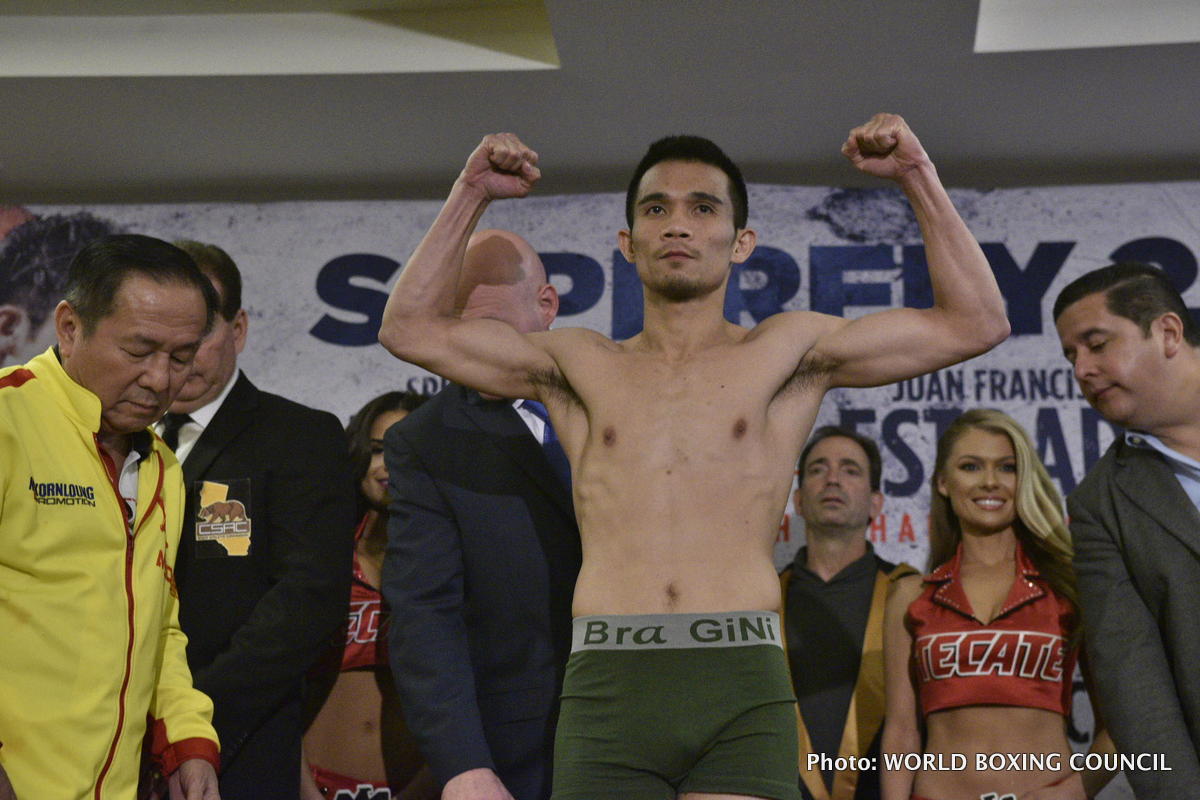 In what could, should prove to be great news for fans of the little guys of the sport, Thai warrior Srisaket Sor Rungvisai has said he has two goals for the future: unifying the super-flyweight titles, which would include a big fight between he and Jerwin Ancajas, and then moving up to bantamweight to fight Naoya Inoue. If these two fights took place, fans would be guaranteed some quite blistering action; the kind that would make them temporarily forget all about the heavyweight division that so commands fan attention.

Rungvisai, who has already given us some superb action in fights with Roman Gonzalez and Juan Francisco Estrada, faces Iran Diaz, 14-2-3 next, in October, but the WBC super-fly king then aims to try and unify the belts before moving up for what could prove to be the ultimate challenge. 31 year old Rungvisai, 46-4-1(41) has plenty of respect for fellow lefty Ancajas, 30-1-1(20), the reigning IBF super-flyweight champ, as well as for Inoue, the current WBA bantamweight ruler – but this doesn’t mean he will not try his utmost to flatten both men if and when the fights come.

“I have been watching him fight and I think he’s a great boxer especially in terms of his style fighting backwards,” Rungvisai said of Ancajas whilst speaking with Inquirer.net. “If I really get to fight with him, I would definitely move forward and try to knock him out. I think that will be a great fight. My wish is that I would like to unify the [115 pound] division. If I really can do it, I want to clean up the division first, unify the whole thing and when it’s all done and if it really happens I would consider going up to the 118 pound division to fight Inoue.”

While a fight between Rungvisai and Ancajas would be a potential thriller, a fight between the Thai southpaw and “Monster” Inoue would really get fight fans in a lather. The unbeaten Japanese wrecking machine, 16-0(14) who has already won belts in three weight divisions will enter the WBSS bantamweight tournament in October, and though he is the favourite to win the tournament it could take a fair amount of time for the tourney to reach its conclusion.

But after the tournament, whether he’s won it or not, Inoue against Rungvisai would be waiting – we hope. And what a fight this one really would be should it go down. Two viciously powerful punchers, one of them proven to be teak-tough, both of them fearless – what’s not to like!

Whenever and wherever it took place, hardcore fans who are familiar with both warriors would tune in to see Rungvisai and Inoue rumble. And rumble hard they certainly would do.