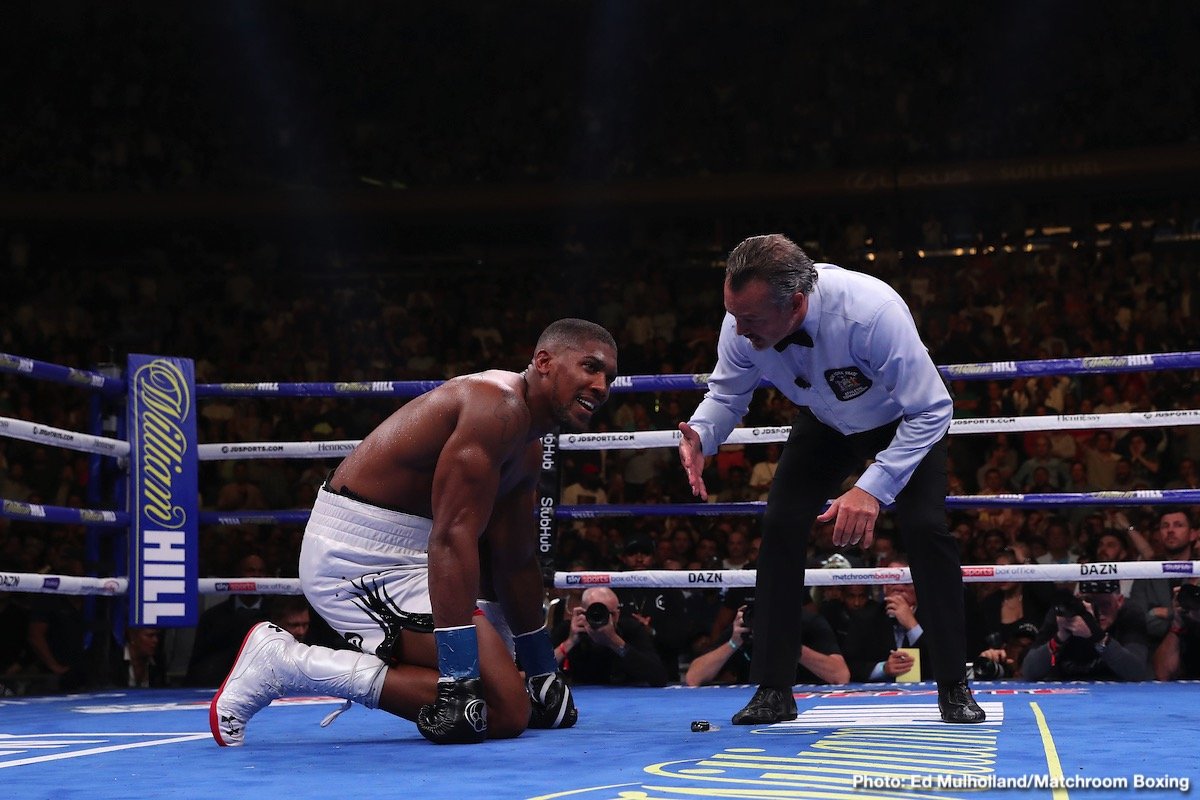 Aside from a very, very special select few, all fighters suffer a defeat every once in a while. There is of course no shame in losing – “we all lose in life,” said the great Muhammad Ali – but to some fans, to some critics, the failure to avenge a loss affects a fighter’s legacy; even more so if this fighter never actually attempts to get revenge over the man or the men to have beaten him.

There are exceptions of course: for instance, nobody in their right mind holds it against Ali for not trying to avenge his never-should-have-had-the-fight-in-the-first-place bout with Larry Holmes any more than they hold it against Jim Jeffries for not attempting to get revenge over Jack Johnson. But if a fighter loses to a rival during his prime, shouldn’t he at least try to put right the wrong? Should his legacy be compromised if he either didn’t try to do so, or if he was unable to do so when getting in the ring?

Which brings us to ex-heavyweight champ Anthony Joshua. Most fans feel he is doing the right thing, the honourable thing in going right back in with Andy Ruiz, who of course took his “0” along with his belts in June. But some, such as George Foreman, feel AJ is making a foolish mistake, that he will likely lose to Ruiz again. It’s an interesting point regarding Foreman’s undeniable greatness: “Big George” never once avenged a pro loss (and he suffered five during his career), not only that, but he never, ever tried to get revenge over one of the men to have bested him.

In a way, the fact that Foreman never got revenge (over Ali, Jimmy Young, Evander Holyfield, Tommy Morrison or Shannon Briggs) answers the question posed in the above headline. Foreman’s legacy has not been affected by his inability to avenge his defeats. Other fighters, however, were simply unable to live with themselves until they got revenge over the first man, or even the second or the third, to have beaten them; or until they at least tried to do so. Ali, for example, could not wait to get Joe Frazier back into the ring, nor could he sleep at night until he got Ken Norton and Leon Spinks back between the ropes.

Mike Tyson, another heavyweight great (in the opinion of many) never managed to avenge a loss (and he suffered six during his career), yet “Iron Mike” is still revered by millions. The point is, even if Joshua fails to reverse his loss to Ruiz, his career is not necessarily over. In fact, from this point of view, Joshua deserves enormous credit for climbing back in the ring with the man who wrecked him; even more so for doing it so quickly.

It’s all down to a fighter’s mental make-up. Some can live with defeat, others cannot. Joshua falls into the latter category. Imagine if, like Foreman before him, Joshua is unable to avenge his first pro loss but goes on to score many other important victories. Joshua could still go down as a great; with, say, wins over Tyson Fury and Deontay Wilder.

We really do make too much of a perfect record these days. All the same, isn’t it better for a fighter to try and get revenge on the man who inflicted this defeat as well as any that may come later?

News:
Are You Thirsty For More Mike Tyson Exhibition Bouts? Tyson Says “I'd Like To Have One Every Two Months
Follow @eastsideboxing