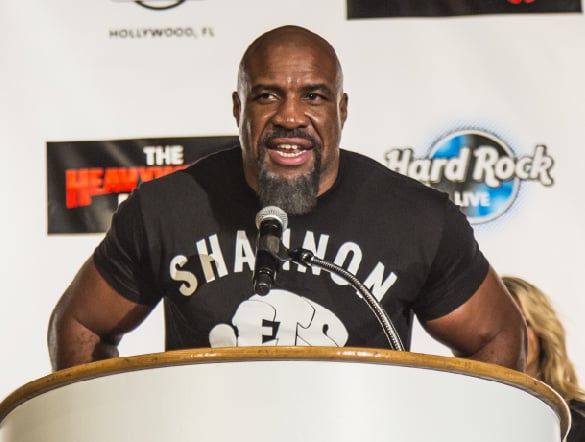 While the British boxing scene is buzzing over today’s official announcement that David Haye and Tony Bellew will meet in what appears to be a very genuine grudge-match next March, not everyone is happy or thrilled at this news. Shannon Briggs, who was to have fought Haye, is absolutely livid right now.

As soon as he heard the news regarding the March 4 fight, Briggs wasted no time taking to social media to let his anger, and his intentions, known. Briggs – who with the recent drugs test shocker regarding Lucas Browne, appears to be without any fight to speak of – says he plans to sue Haye, that he had a contract to fight Haye.

“I’ll be suing him for what he did,” Briggs wrote on his social media account. “Yes I have a contract from him but I laid low to let it play out. My attorney will be bringing his weak ass promotional company down. Champ you’ll be paying me for wasting my time and walking away from millions of dollars. All because you scared.”

It seems unlikely Briggs does actually have a fight contract regarding a bout with Haye, certainly one that Haye signed. The two heavyweights had a verbal agreement, with Haye saying he would fight Briggs if the 44-year-old could, A: get a license and, B: win a fight on his May under-card. Briggs did both but Haye, for a number of reasons, opted not to go ahead with the Briggs fight. Poor sportsmanship this may have been from Haye, but has Briggs really got grounds to sue him?

If he does have a contract with his and Haye’s signatures on it, then Briggs is of course entitled to go to court – but did Haye actually put pen to paper?

Regardless of the Haye fight (and most likely the Browne fight) falling apart for Briggs, it is to be hoped the veteran who turns 45 next month gets himself someone of note to fight instead. After all the shouting and screaming and all the promoting he has done, Briggs deserves a fight and soon. Briggs says the boxing powers that be are trying to freeze him out. Just lately it does seem as though “The Cannon” cannot get a break.