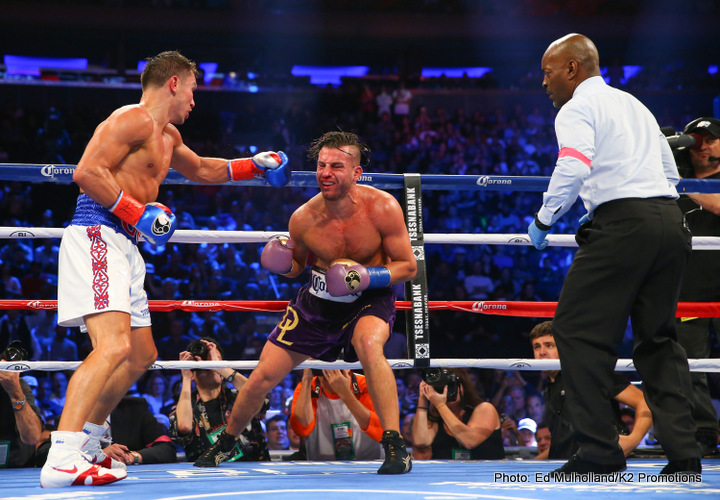 It’s not going to be easy for Gennady Golovkin and his management to get a unification fight against WBO middleweight champion Billy Joe Saunders for April 23. Saunders is saying that the offer that was made to him by Golovkin’s management at K2 Promotions was not enough for him to agree to a fight against the 33-year-old IBF/IBO/WBA champion Golovkin.

Saunders, 26, says he wants more money and/or Golovkin to agree to come to the UK to fight him. Golovkin fights on HBO, so it’s not probable that he would be able to fight Saunders in the UK due to the time zone issues HBO would have to deal with in a fight like this.

“If I take the fight with Golovkin I genuinely believe I could beat him but they have got to put some proper money on the table and if they do that then I will do it,” Saunders said to ESPN.com. “I could earn that money against someone else. They’ve got to pay me more money than I would get for the Chris Eubank Jr rematch.”

The offer that Golovkin’s management made to Saunders is rumored to be $4 million. Saunders said recently that he would agree to fight Golovkin for 4 million pounds. That comes out to be a little over $6 million. If Saunders insists on getting $6 million for the fight, then it’s not realistic that the fight can be made. Even Golovkin wouldn’t make that kind of money for a fight against Saunders, and there’s no way that a fight between them can be PPV in the U.S. It might be able to sell on PPV in the UK, but I wouldn’t bet on it.

“An offer has been made but people need to understand I don’t have a loss on my record and it’s not like Golovkin’s last opponent David Lemieux who had lost twice before he fought him,” Saunders said.

Lemieux came into his fight against Golovkin with two defeats on his record from 2011. Fans overlooked the defeats because of how good Lemieux had looked in his fights since those losses. He had knocked out almost everybody he had faced since 2011. In the case of Saunders, he’s not well-known among American casual fans, and he wouldn’t be a good candidate for a fight on pay-per-view on HBO.

“Now I’m world champion I’ve got options and I could make my money elsewhere. Most definitely the fight with Golovkin will happen at some point,” Saunders said.

I don’t think Saunders can make $6 million fighting Andy Lee or Chris Eubank Jr. again. I don’t think he would even make $4 million.

If Golovkin can’t negotiate a fight with Saunders, he’ll wind up defending his titles against his IBF mandatory challenger Tureano Johnson on April 23rd. Golovkin’s promoter Tom Loeffler has already booked The Forum in Los Angeles, California for a possible site for his next fight.