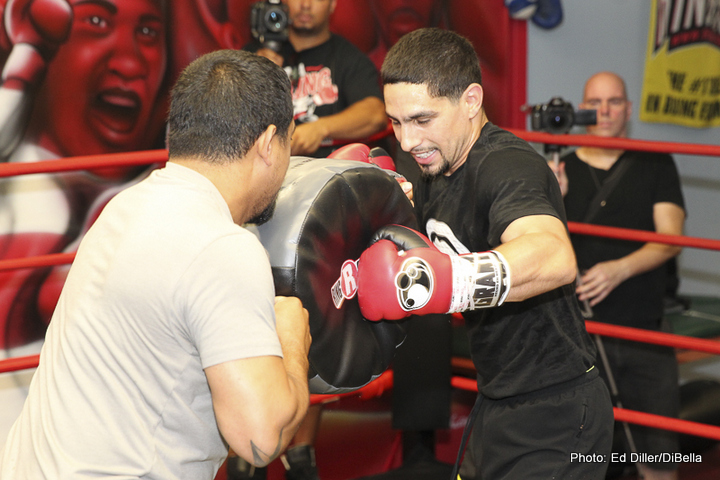 An exciting Latino fistic explosion between warriors Danny Garcia and Robert Guerrero will be screened exclusively live on BoxNation on Saturday 23 January.

The addition of Garcia v Guerrero adds to a red-hot January on the Channel of Champions alongside top live domestic and international action with British Featherweight Champion Ryan Walsh (22 January) and the return of fearsome Russian Sergey Kovalev (30 January).

For the 31-fight unbeaten Garcia, of Puerto Rican decent, he’s taking the hard route to become a two-weight world champion by facing in only his second fight at welterweight, a hard and relentless adversary in Guerrero.

The 27-year-old big-hitter from Philadelphia vacated his titles last year to make the move up and knocked out former WBA World Welterweight Champion Paulie Malignaggi in nine rounds and is now ready to trade blows with his rival.

“Guerrero comes to fight, and he’s faced the best in the sport. This is a huge opportunity for me to show why I’m a star, and there’s no better place to do that than in Los Angeles, where stars are born.” Said Garcia.

Coming back from the Thurman loss, 32-year-old Guerrero outpointed Aaron Martinez over ten rounds and is looking to get back to a winning run and towards a sixth world title. He’s anticipates a war with his Latino rival.

Guerrero, from Gilroy, California, said, “If there ever was a fight that defined the word ‘war,’ it’s this fight,” Guerrero said. “I guarantee this is going to be a historic fight. A Mexican-American vs. a Puerto Rican-American, it’s a bitter rivalry,”

“Danny Garcia is a great champion, and I know we’re going to put on a tremendous show January 23. It’s going to be fireworks—and I can’t wait!”

Jim McMunn, BoxNation Managing Director, said, “Garcia v Guerrero is the first live international fight on BoxNation of 2016 and we’re delighted to add this potential thriller to the January schedule for our subscribers. Ryan Walsh starts the year for us with his British Featherweight title defence against Darren Traynor and then the ferocious punching, top ten pound-for-pounder, Sergey Kovalev, ends the month defending his WBO/IBF/WBA World Light-Heavyweight titles against Jean Pascal. Then into February, we’re looking forward to the huge WBO World Lightweight title showdown between Terry Flanagan and Derry Matthews. It’s the start of another big year on the Channel of Champions and we’re excited to be delivering our subscribers even more live domestic and international action in the coming months.”