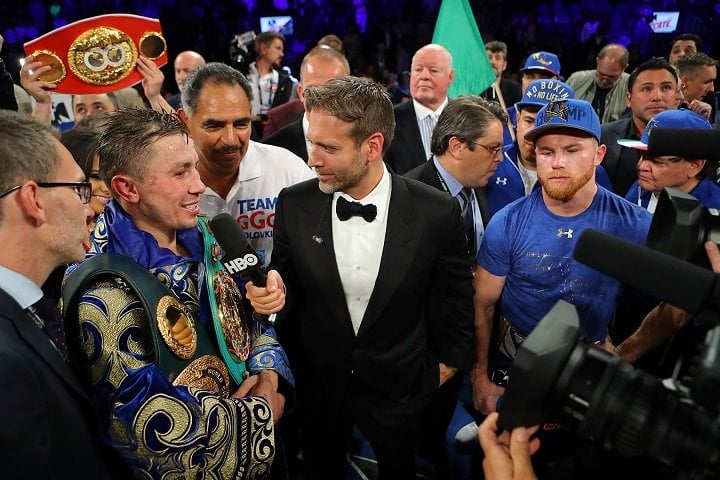 Saunders, 28, would like to fight Golovkin or Saul Canelo in 2018 if he can successfully defend his WBO title next month against his mandatory challenger David Lemieux (38-3, 35 KOs) in their fight on December 16 in Montreal, Canada. That’s a tough one for Saunders, but he feels confident that he’ll be able to out-smart Lemieux and beat him in his own country.

The strategy Saunders described was already used by Canelo, Kell Brook and Danny Jacobs against Golovkin. They had some success with that strategy in winning rounds. What ultimately prevented Canelo, Brook and Jacobs from beating Golovkin was his jab. When these fighters would attempt hit and run, they would frequently walk into Golovkin’s powerful jab, which would stop their forward momentum. Golovkin wouldn’t always get his jab off to keep them from landing shots, but much of the time he did.

Saunders will have a tougher time using a hit and flee tactic against Golovkin, because he doesn’t have great stamina. Saunders will also be forced to deal with a lot of pressure that Golovkin will be putting on him. With Saunders have very little [punching power, Golovkin will be more willing to walk him down and look to KO him compared to in his last 2 fights against Canelo and Jacobs. Golovkin showed both of those fighters a lot of respect, which is why the fights went the distance.

At this point it’s premature to talk of Saunders eventually facing Golovkin. Lemieux is going to be a difficult obstacle for Saunders, as he’s going to be fighting at home in front of a huge crowd of his boxing fans on December 16. Lemieux tends to do well when he’s fighting a guy with no power. Saunders is going to need to do something to try and keep Lemieux off of him. The way Saunders has looked in his last 2 fights against Willie Monroe Jr. and Artur Akavov, he might not see the final bell. In fact, Saunders might not make it to the second half of the fight. Lemieux is going to be looking to end the fight almost immediately.

Golovkin is still waiting for Canelo to decide whether he wants to face him again. Canelo will be fighting on May 5th. His promoter Oscar De La Hoya isn’t ruling out matching him against Lemieux for his next fight if he gets past Saunders on December 16.