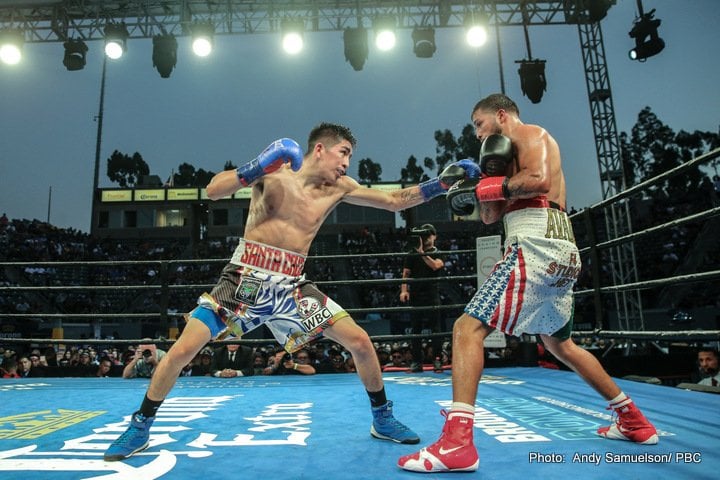 Featherweight world champions Leo Santa Cruz and Abner Mares were both victorious in their Premier Boxing Champions on FOX and FOX Deportes fights Saturday night from StubHub Center in Carson, Calif. and officially set up a world championship rematch between the two popular southern California champions in early 2018.

“I want Abner Mares,” said Santa Cruz. “I said if we both win; we’re going to fight. I’m ready to fight him in Los Angeles in the beginning of next year.”

“He was very tough and I was fighting the wrong fight,” said Santa Cruz. “I wanted to please the fans and give them a brawl. Once my dad told me how I could stop him easily, I boxed him more and got the stoppage.”

Santa Cruz used his length effectively and set up his jab while firing straight right hands to Avalos’ head. Avalos stayed tough, but was in trouble in round four when Santa Cruz connected with a left hook that stunned Avalos in the corner.

Avalos originally retreated but as Santa Cruz came forward he was forced to brawl through the remainder of the round and took a great deal of punishment. Always game, Avalos continued to fight back and landed punches as Santa Cruz attempted to walk down his opponent.

“I thought I had him in the fourth round,” said Santa Cruz. “I gassed out a little bit but I got my air back later. I thought the ref was going to jump in during that round but he let him continue.”

Finally, in the eighth round, after several more flurries of punishment, referee Thomas Taylor jumped in and stopped the bout 1:34 into the round. Although he was out landed 282-169, Avalos believed he could have continued in the fight.

“I’m very upset with the stoppage,” said Avalos. “We were fighting the whole time. There was no reason to stop this fight. I wasn’t hurt like the referee thought. I want to fight for the title again.”

The co-main event saw Mares (31-2-1, 15 KOs)make the first defense of his title by wearing down and eventually earning a technical decision over Andres Gutierrez (35-2-1, 25 KOs).

Referee Jack Reiss called on the advice of the ringside physician midway through the 10th round, who determined that Gutierrez was unable to continue due to a cut. Although the cut was originally opened by a punch, the commission determined that a series of accidental fouls caused the cut to worsen to the point that the fight was ended, and a final verdict would be decided by the scorecards.

Mares was sharp from the outset, using the jab to get to Gutierrez and teeing off with combinations. The right hand was a weapon all night long and in the second round he connected with the shot that opened up the cut under Gutierrez’s left eye.

“I told everyone that I was here to make a statement,” said Mares. “I had a tough opponent and he showed how good he is. It took a lot of punches and a lot of big punches. It was just a matter of time before I stopped him.”

Gutierrez continued to put up a strong effort and never stopped throwing punches, using his jab to try to keep Mares at bay. However, as the cut worsened throughout the fight, Mares had an easier time landing thudding right hands to Gutierrez’s face.

“I didn’t feel like the fight should have been stopped,” said Gutierrez. “I was hurting him as much as he was hurting me. My cuts did not bother me. I want to fight him again or have another shot at the title. I was prepared to fight to the final bell.”

Read:  Jarrell Miller Makes His Return To The Ring Tomorrow In Argentina

“I thought they could have stopped it earlier,” said Mares. “He’s a young guy who was too brave for his own good. I was happy with the decision. I deserved the stoppage but I’m happy I got the win.”

It was the accumulation of punches that eventually forced the referee to stop the fight. At the time of the stoppage all three judges had the fight in favor of Mares, by scores of 100-90 and 99-91 twice.

The opening bout of the telecast saw an action-packed opening round that ended in controversy as former world champion Antonio DeMarco (33-6-1, 24 KOs)score a first round stoppage of previously unbeaten Eddie Ramirez (17-1, 11 KOs) in their super lightweight affair.

“That stoppage was way too early,” said Ramirez. “I was not hurt. I was fighting back and I felt like I was recovering. I want an immediate rematch if possible.”

“I think it was a good decision from the referee,” said DeMarco. “He was taking a lot of solid punches and I felt like I had him.”

Ramirez came out aggressive early and pushed DeMarco against the ropes, looking to punish him with combinations. Midway through the round however, DeMarco connected with a straight left hook that stunned Ramirez and sprung DeMarco onto the attack.

As DeMarco stalked Ramirez around the ring, he caught him in the corner and forced Ramirez’s knees to buckle. Ramirez was able to stay on his feet and appeared to be throwing back, but the referee jumped in and stopped the bout 1:56 into round one.

“I’m very thankful to Ramirez for taking the fight,” said DeMarco. “I think big things are coming for me. I’m going to talk to my team and see what is next. I think this performance will erase a lot of doubts about me.

Read:  Artur Beterbiev vs. Dmitry Bivol: A Match That Needs To Be Made

“I’m an experienced fighter and I stayed patient. I had great preparation and waited for the right moment. I feel great right now.”

“I want an immediate rematch if possible,” said Ramirez. “I’ll talk to my team but that was a bad stoppage and I want a chance to redeem myself.”