Ricky Hatton was a guest on Talk Sport earlier today, and the former 140-pound king spoke about his upcoming ring return against Mexican great Marco Antonio Barrera, who he will box in an exhibition in Manchester on July 2. Hatton said the bout will be fought at 11st 7lbs and that he himself began training at over 14 stone but is now significantly lighter. The exhibition will be contested over eight rounds.

Hatton said he has heard the questions, with people asking him, ‘why?’ And the 43-year-old says it will be for fun and for the purposes of uplifting people, that there will be no full-on or “real” comeback.

“If your heroes are going to make a comeback or do an exhibition, you don’t want to see them get hurt and no one is going to see that,” Hatton said of the July return. “It will be competitive because I’m not having anyone come to Manchester and stand me on my head and I’m sure he won’t want to have that done to him. But, that’s where people don’t need to see people get hurt. People have said to me, ‘Ricky, why are you doing it? We don’t want to see you get hurt.’ Trust me, have faith in The Hitman, you won’t see me get hurt.”

Hatton says it will be a “party” on July 2, with musical acts and MMA fighters also in action. Dubbed “The Hitman Rises,” the event has already shifted plenty of tickets according to Hatton. Hatton was of course always a great draw, a fighter with an absolute army of fans and supporters. Hatton says he has a chance to hear that deafening and massively inspirational cheer of the crowd once again and that this is another reason he is coming back.

Barrera looks to be in good shape already, and Hatton says he is training hard. We don’t want to see anyone get hurt in these big-name exhibition bouts, but neither do we want to see our heroes embarrassed. Hopefully, it will be a good night, an enjoyable night, maybe even an inspirational night in Manchester on July 2.

“Nothing has ever been boring about my shows and this won’t be any different,” Hatton said. 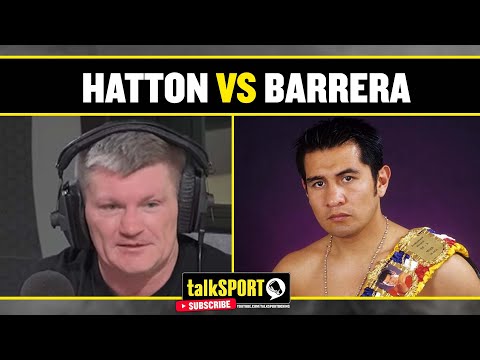