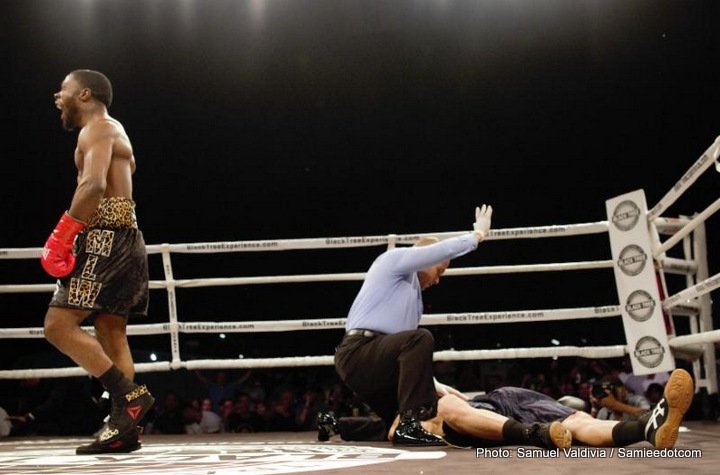 “KO Night Boxing: Rumble on the Water 2″ was presented by Black Tree, and promoted by Roy Englebrecht Promotions, in association with KO Night Boxing LLC and Roc Nation Sports.

…..and the end for William Gonzalez

The 5′ 4” Williams (12-0, 5 KOs), fighting out of New Haven (CT), exploded with pin-point accuracy, also displaying his new-found power, dropping Gonzalez 30-8, 26 KOs), of Nicaragua, three time in the first round. The crafty southpaw finished off his more experienced opponent with a perfectly placed right-left combination, right on the button, for his third and final knockdown. Referee Raul Caiz, Jr. waved off the action, not bothering to count, as Gonzalez lay vertical on his back in dire straits.

“I prepared well for this fight and anything can happen when I work hard,” Williams remarked after his third consecutive knockout victory. “I felt his power early with a body shot but I stayed focused.

“I can deal with anybody in my division. I want to fight Lee Selby (IBF featherweight world champion), or any of the world champions, but none will fight me. I really want Gary Russell (WBC champion); I’m here, Gary. It’ll be target practice for me.”

In the co-feature, highly touted super middleweight prospect Junior “The Young God” Younan (13-0, 9 KOs) remained undefeated, winning a close eight-round decision against tough Mike “The Menace” Guy, of Sacramento (CA), the former California State champion. (9-3-1, 5 KOs) Guy was penalized a point for tossing Younan to the mat at the end of round six or the result would have been a majority draw.

In his first eight-round fight, the 21-year-old Younan gained invaluable experience fighting the non-stop Guy, who kept coming forward, throwing punches from all angles, at his Brooklyn opponent.

“You can’t learn if you don’t go rounds,” Younan correctly noted after the fight. “I’m only going to improve. Guy kept moving forward the entire fight. There were a couple of things that bothered me, but I went eight hard rounds and won. Thank you to Mike Guy for that.”

“I thought I did real well against a good opponent,” former power forward Rice said after the fight “He’s an athlete, getting better each fight. He’s not the same fighter he was a year ago. I’m becoming more strategic, working on my jab to get better. Basketball players need good footwork like Chris Paul and Lebron James. I’m working to bring my footwork from basketball to boxing,”