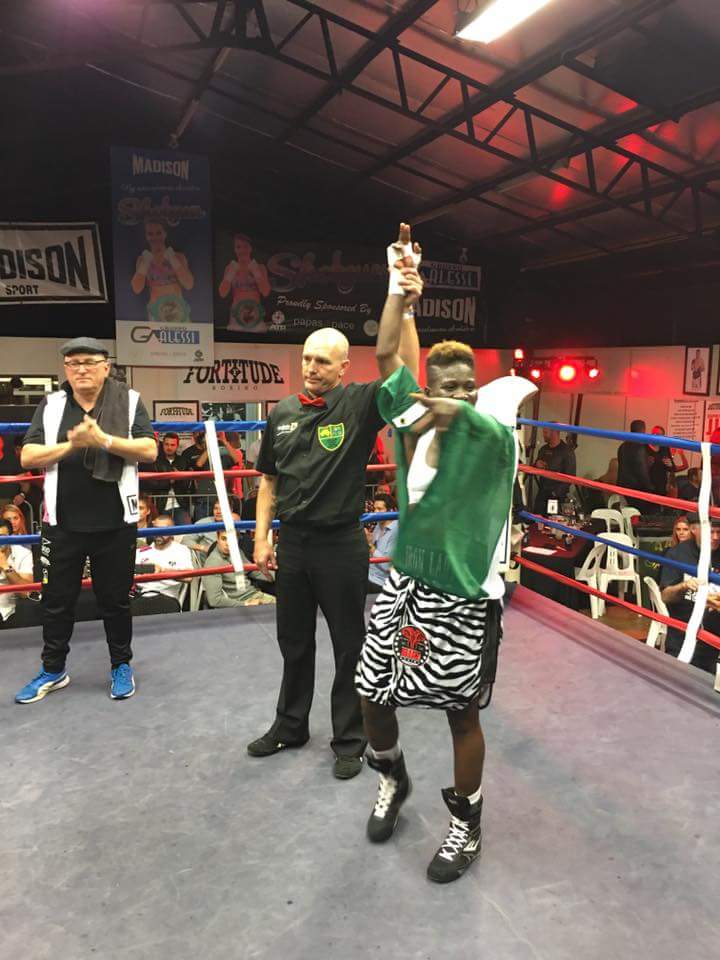 Nigerian female boxing superstar, Helen ‘Iron Lady’ Joseph made a strong case for another crack at the world title with a devastating round two knockout victory over home favourite, Shannon O’Connell at the Famous Fortitude Gym, Newstead, Queensland in Australia on Saturday.

The two-time world title challenger dominated throughout the short period the fight lasted and caught O’Connell with a deadly uppercut at the tail end of the opening round that sent the Australian sprawling helplessly to the canvas in front of her own people. She was however saved by the bell which sounded just after she was motioned to fight again after beating the count.

O’Connell, now 15-6-1, 7 KOs was coming off defeat to Argentina’s Marcela Eliana in a bid for the IBF female world super bantamweight title in Buenos Aires last month and was looking for victory over the Ghana based Helen Joseph to enhance her credentials for a third world title crack, having previously also lost a challenge for the WBC female world super featherweight belt to Diana Prazak in March 2014.

But she met a hungry warrior in 28 year old Joseph (improves to 14-3-1, 9 KOs) who is still teething that she was robbed on both occasions she fought for the IBF female featherweight title, first to Dahianna Santana in the Dominican Republic in 2012 and again to Jennifer Han in El Paso, Texas, USA two years ago, both via unanimous decisions.

Joseph has never hidden her desire to challenge for the world crown again and the Nigerian has even moved down in weight these days but was still very comfortable with her complete dominance over the 34 year old O’Connell who suffered much more when she decided to stand and exchange blows with the hard hitting ‘Iron Lady’ in round 2.

Soon the power of the African’s blows were having effect and O’Connell was sent thumping down to the canvas again midway through the round, this time never to get up again and the fight was over. Ringside doctors had to attend to the very fatigued O’Connell who appeared to have lost consciousness for a few minutes before she was revived, woke on her feet and walked to take a seat in her corner.