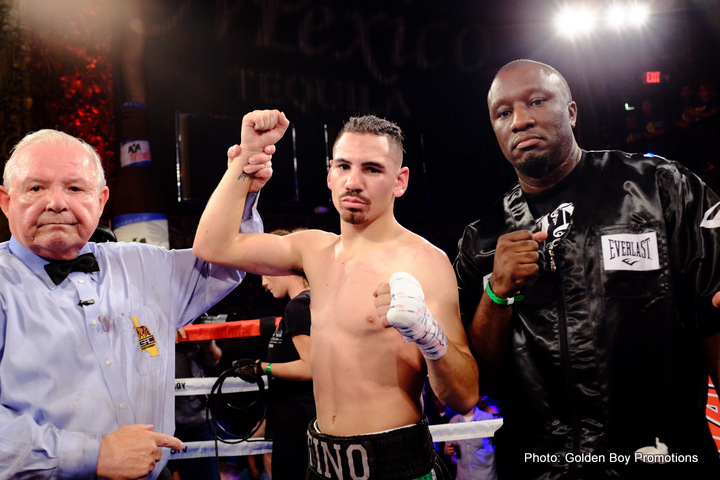 Golden Boy Promotions contender Manuel “Tino” Avila (22-0, 8 KOs) took a massive step in his career in facing former WBO International featherweight title holder Jose Ramirez (27-6-2, 16 KOs) as the main event broadcast live on Estrella TV’s Boxeo Estelar. The bout was a grueling one, with the heated exchanges throughout the fight resulting in a cut over Ramirez’s eye in the seventh round. In the beginning of the tenth round, the judge deducted a point from Ramirez for holding. At the end of the bout, the judges awarded a split decision victory to Avila with scores of 99-89, 99-89, 93-95.

“I didn’t like this fight, and I feel like it wasn’t a fight,” said Manuel Avila. “My opponent wasn’t throwing punches.”

“I feel satisfied with this fight. I showed that I was valiant and I could take on a favored fighter,” said Jose Ramirez. “I wasn’t in my home territory, and I would’ve had to knock him out if I were to win.”

The co-main event of the night featured resilient Emilio “The Kid” Sanchez (14-0, 9 KOs) of Pacoima, CA against Guadalajara, Mexico’s Diuhl Olguin (10-6-2, 9 KOs) for an eight-round war. The match went all eight rounds, with both fighters displaying their tenacity with heated blows. In the end, the judges all unanimously awarded Sanchez the victory with scores of 77-75, 80-72, 79-73.

“He was a tougher opponent that I thought he was, but we were prepared for that.” said Emilio Sanchez. “I had to watch out for his head butts, and keep my distance through out the fight. I’m excited to be able to finish off the year on a positive note with this victory.”

Opening up the Boxeo Estelar telecast, Pablo “The Shark” Rubio Jr. (8-0, 3 KOs) took on tough opponent Francisco “Panchito” Dominguez (7-9, 1 KO). The fight lasted all rounds, with Rubio hurting Dominguez twice in the bout. The judges all unanimously agreed that Rubio was the victor, with scores 59-54, 60-54, and 60-54 respectively.

“I thought it was a great fight, and I faced a tough opponent,” said Pablo Rubio Jr. “I know I hurt him twice, and I applaud him for being able to make it through the fight. I’m also thankful for my trainer Rudy, who is the reason why I was able to get this victory tonight.”

Topping the Ring TV live-stream and giving yet another stellar performance, top prospect, Luis Coria (2-0, 2 KO) took on Laredo, Texas’s Juan Bryand (1-6-1) in a featherweight fight scheduled for four rounds. However, within 2 minutes and 55 seconds into the first round, Coria ended the bout by knocking out Bryand via technical knockout.

“I’m glad my fans were able to come out and support,” said Luis Coria. “It sucks for my opponent, but we know the risks of being a boxer, and I came to get the job done. I studied him well, and I’m glad I was able to get the stoppage early. This won’t be my last fight this 2016.”

Also streamed on RingTV, Tenochtitlan “T-Dog” Nava (4-0, 1 KO) faced Ricky Vasquez (6-3-1, 1 KOs) of Laredo, Texas in a four-round featherweight bout. The bout went the distance, with exchanges leaving Vasquez with a cut left eye in the third round. Ultimately, Nava maintained his undefeated status by majority decision with judges scores of 38-38, 39-37, and 39-37,

“I did get frustrated through certain points in the fight,” said Tenochtitlan Nava. “His fighting style was slick, and he was able to get in and get out with ease. At that point, my corner encouraged me to step in and use my jab to break in. This was a good experience for me, and I’m glad I got to fight a boxer with a style that I haven’t seen before, and on top of that get the win.”

Opening up the RingTV live streamed portion of the night for a scheduled six-round lightweight bout was Azat Hovhannisyan (10-2, 9 KOs) who knocked out Israel Rojas (9-12, 3 KOs) within the first round of the bout at the 1:31 mark by way of a left uppercut sending Rojas straight to the mat.

“Every day we train hard, and when the call came to fight, we said yes immediately,” said Azat Hovhannisyan. “I’m in the gym preparing my craft, and that’s what the fans saw – me using my preparation to take on just another fighter who is just as hungry as I am.”