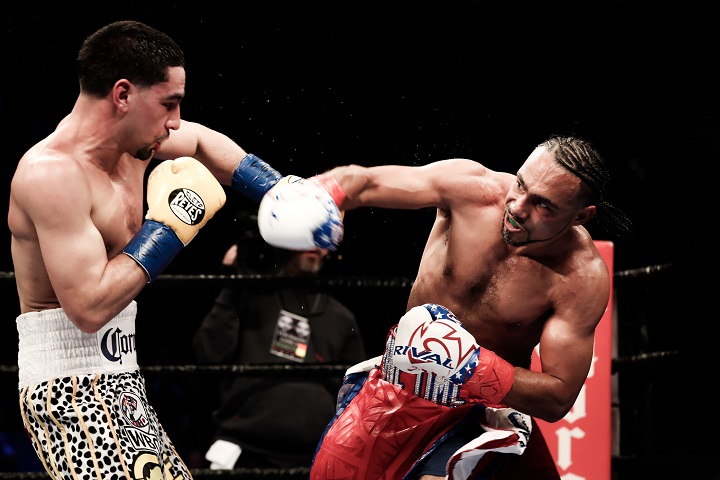 Garcia took a lot of heavy punches from Thurman tonight, and his face looked pretty beaten up after the fight. Garcia had success at times when he was forcing the fight and throwing shots, but he wasn’t doing enough most of the time to give him rounds. Thurman was more willing to take chances in the fight than Garcia was. That’s obviously why the judges gave Thurman the victory. He was willing to take risks more than Garcia.

The scores were 116-112, 115-113 for Thurman, and 115-113 for Garcia. Thurman fought well enough to win the fight 8 rounds to 4 in this writer’s view. Garcia blew his opportunity to win the fight by waiting until he second half of the fight to start putting a lot of pressure on Thurman. Garcia fought like he was afraid of Thurman until the last part of the fight. With no real pressure being put on him, Thurman was able to land his power shots when and where he wanted.

Thurman left himself open a lot of the time for Garcia’s left hook counters. He was getting hit with those shots. Garcia was rarely averaging 50 punches thrown per round. It’s not that he didn’t have the opportunity to throw more punches. It just looked like Garcia didn’t want to take the risk of getting hit.

After the fight, Garcia said that he felt that he had done enough to get the victory over Thurman. Garcia reasoned that he had been the one forcing the fight.

Thurman, 28, didn’t say what his plans are now that he holds the WBA and WBC titles. It’ll likely be up to Thurman’s manager in what direction he goes in. It would be nice for the boxing fans to see Thurman take on the winner of the Errol Spence Jr. vs. Kell Brook fight. Those guys would be arguably a tougher fight for him than what we saw tonight from Garcia.