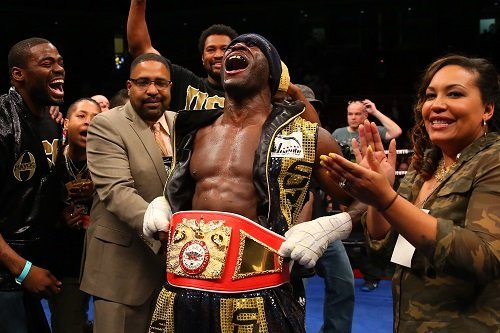 Photos by Rich Graessle and Larry Levanti/Main Events — hiladelphia, PA: Steve “USS” Cunningham (27-6, 12 KOs)* took down the undefeated powerhouse Amir “Hardcore” Mansour (20-1, 15 KOs) via unanimous decision at the Liacouras Center. In the all-Philly main event, Philadelphia-raised Cunningham and Philadelphia-trained Mansour brawled for ten rounds of heart-stopping action that had the entire crowd at the Liacouras Center on their feet and screaming for more. These two warriors just kept coming at each other for ten straight rounds. By the end they were both bleeding and and battle-worn.

Mansour was relentless from the first bell. He kept coming at Steve with huge looping hooks. Cunningham began bleeding in the second round. Then Cunningham cut Mansour over the same eye in the third.

Mansour knocked Cunningham down twice in the fifth but Steve managed to get back up just before the bell. Cunningham came back with a vengeance in the sixth and the crowd at the Liacouras Center was on their feet. The fans were split equally as half chanted “Hardcore” and half chanted “USS.” By the ninth the chants of “Steve” drowned out everything else.

Kathy Duva said, “Jolene Mizzone and J Russell Peltz are the best matchmakers in the business, hands down. That was the bull and the matador. Steve, you get knocked down but you get back up baby!”

Steve said, “With my God I can do anything! Faith is all I have. I was alright. I have been down before and got up and won. He wasn’t built for the ‘USS’ Cunningham. I want to be heavyweight world champion. ‘USS’ Cunningham always finds a way.”

Mansour said, “I can’t complain. He was the better man; the tougher man. I got tired but he got tired too. I just kept stepping on the gas pedal because that is just the fighter in me. You got to be smart in the ring if you want to be successful and tonight he was smarter than me.”

In arguably the best of 2014 so far, Brooklyn’s own Curtis “Showtime” Stevens (27-4, 20 KOs) came from behind to knockout Nassau, Bahamas native Tureano Johnson (14-1, 10 KOs) in the tenth round. The crowd was into every punch from the first bell until the referee called the fight with slightly more than two minutes to go in the fight.

Both fighters came swinging in the first. In the first two minutes of the first round, Johnson fought southpaw to confuse Stevens then he switched back to orthodox. He continued to switch back and forth throughout the fight. It seemed to work for the first few rounds as Stevens appeared to take a beating. Then in the fourth round Stevens turned the tables on Johnson and unleashed a holy war on him. This back-and-forth battle continued and neither fighter seemed to have control of the any one round. Johnson had Curtis against the ropes for the majority of the fight. Stevens reached another level in the tenth and unloaded on Johnson. The referee stopped the fight at 2:09 in the tenth. Johnson was not happy with the decision and continued to contend that he was not going down.

Johnson was actually leading on the scorecards convincingly and Curtis needed the knockout in order to win. Through nine rounds the judges had Johnson up 87-84, 89-82 and 89-82.

An upset Johnson said, “It is a privilege to be here. It was unfortunate that I didn’t get the win. Curtis Stevens is a great fighter. The stoppage was an unfair one but I accept it. I worked hard and I won every round. I worked hard for this. I want a rematch immediately.”

Kathy Duva said, “Johnson, your stock just went way up. I would love to schedule a rematch for both these fights on HBO because these fights were unbelievable.”

Junior welterweights Evincii Dixon (4-4-1, 2 KOs) of Lancaster, PA and Edgardo Torres (2-3, 2 KOs) of Vineland, NJ squared off in the last undercard fight of the evening. Dixon came out of the gate guns blazing and knocked down Torres in the first. Torres lasted 2:45 into the second round before the referee called him out and declared Dixon the winner by TKO. Dixon said, “This is boxing. I see you hurt and I am going to attack.”

In a match-up of undefeated light heavyweights, Notre Dame alum Mike Lee (12-0, 7 KOs) knocked out Peter Lewison (6-1, 5 KOs) in the sixth round. Lewison was bleeding near his upper lip in the fifth and Lee knocked him down in the sixth before shutting him down at 1:39. Lee showed his Notre Dame pride by sporting blue and gold trunks/gloves and definitely had the crowd on his side.

In an eight round light heavyweight war Roberto Acevedo of Puerto Rico (8-2, 5 KOs) and Lee Campbell of Laurenburg, NC (7-0, 3 KOs) put on a show for the crowd at the Liacouras Center. Acevedo fell to Campbell via majority decision with one judge scoring the bout 76-76, and the other two judges scoring the bout 77-75 and 78-74 in favor of Campbell. Roberto Acevedo suffered a cut under his left eye but was able to finish the fight.

Roberto said, “I know we had a good fight but could not come away with the victory. Campbell is a very strong guy and the fighting was intense. Now back to the drawing board, concentrate and train for the next step coming back stronger. I hope to be back soon with the help of God.”

In a six round light heavyweight match-up Cuban-born Sullivan Barrera (11-0, 6 KOs) remained undefeated as he overcame Washington, DC native Larry Pryor (7-8, 4 KOs) via unanimous decision with all three judges scoring the fight 60-53. Barrera dominated the entire exchange and knocked down Pryor in the fifth round. Barrera said, “I feel good. I am very happy. 11 wins is good. It’s perfect. I am so happy.”

Edner Cherry (32-6-2, 17 KOs) did not disappoint in his much-anticipated return to the ring after a year-long layoff. The 32 year old Cherry defeated his opponent by UD in the first fight of the evening, an eight round super featherweight match-up with Robert Osiobe (14-9-4, 6 KOs) of Ughelli, Nigeria. The officials scored the fight 77-75, 79-73 and 78-74 all in favor of the veteran Cherry.

*Note: All records have been updated to include tonight’s results.