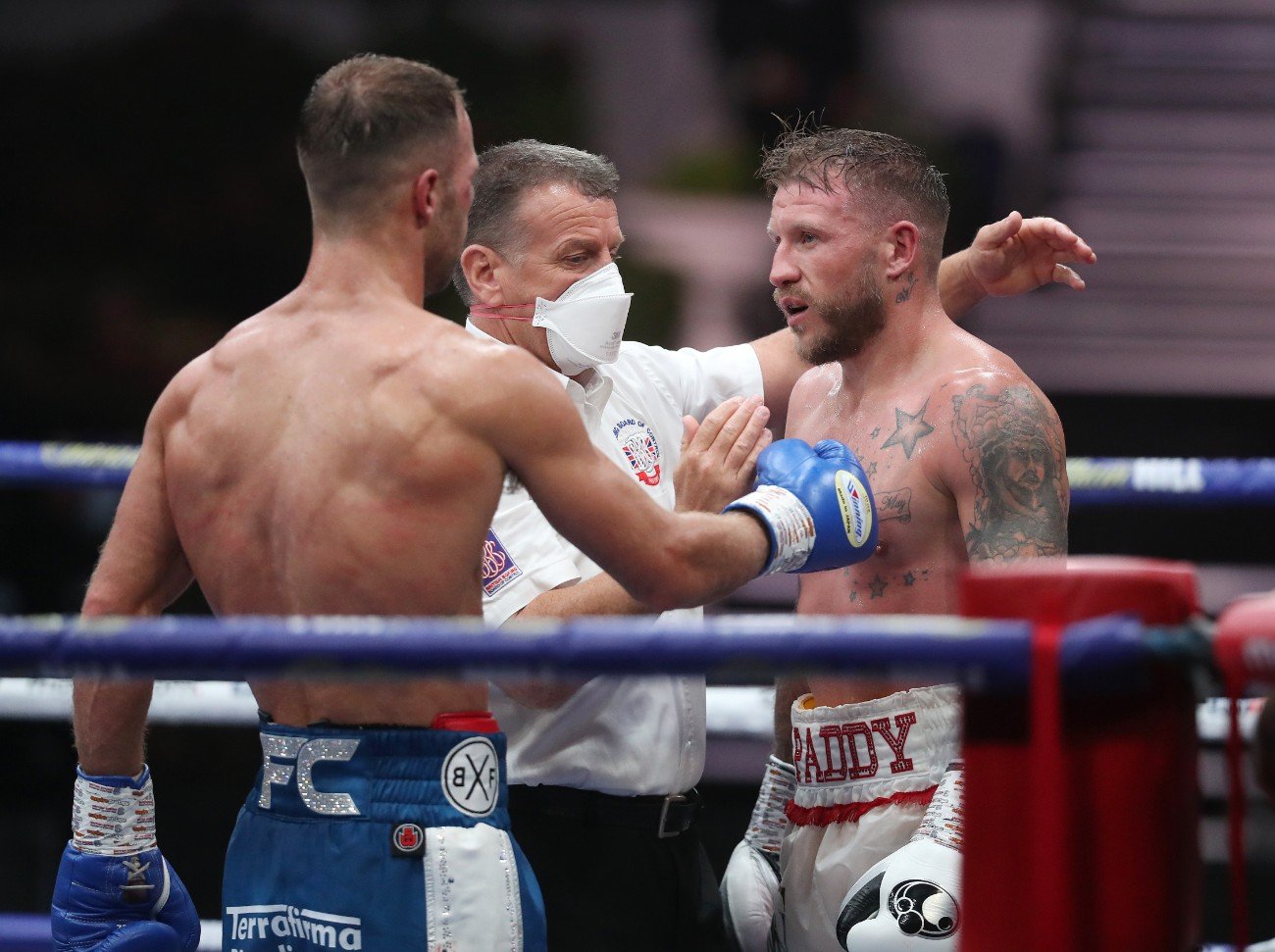 Felix Cash clinically broke Jason Welborn’s resistance in the fifth round to retain his Commonwealth Middleweight Title at the top of the bill on Matchroom Fight Camp Week 3.

The unbeaten 27-year-old produced a ferocious response after losing a point for a low blow, flooring Welborn twice before the fight was waved off, and the undefeated Wokingham talent will now look to push on towards more title action.

“It was a good performance,” said Cash. “It took me a round or a round and a half to get my distance on him and see where he was at and see his reactions. I went to work on him. It was a decent enough performance. He wanted me to stand there and start trading with him, but then you’re giving him a chance, aren’t you? I took him on the jab, broke him down, down to the body, and up to the head. 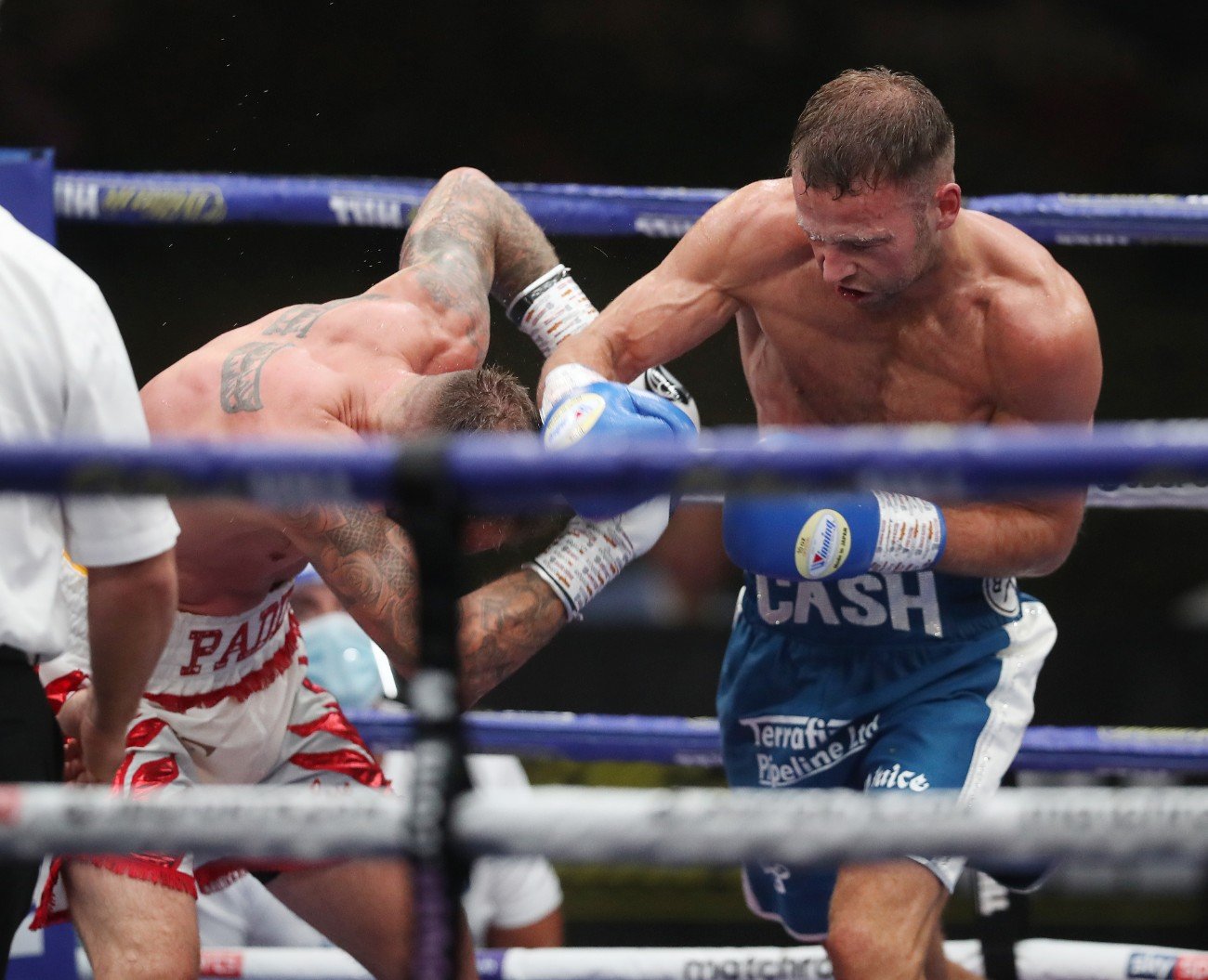 “I broke him down nice and slowly. Round by round, he was getting weaker and getting tired. I knew it was just a matter of time before I got him out of there. He’s a tough lad. There was no point in rushing it and trying to get him out of there early. What a stage to be on. It was unbelievable. The week has been unbelievable. I’ve really enjoyed it. Overall it was a good week. I’m 27, and I’m in the prime of my life. I’m ready for the step-ups now. The ring walk was something else! Topping the bill was a bit of history for me.”

Manchester’s Barrett exploded into life following a sluggish start to inflict a huge one-punch knockout on ‘Lilywhite Lightning’ on his Matchroom Boxing debut.

Donovan’s brave resistance was finally ended in the eighth as he toppled backward following another big left hook from Barrett.

“He was catching me with some big shots,” said Barrett. “I was just trying to get my rhythm at first. He was pinging me and catching me with some good quality shots, and then I could hear my Uncle Pat say, ‘change up the game plan and put it on him now.’ Block, throw, and look where the openings are. I pulled it out of the bag. This is what champions do; they find something and pull it out of the bag.

Read:  Francis Ngannou On Who Has More Punching Power, He Or Deontay Wilder: "Me. We Can Try That" 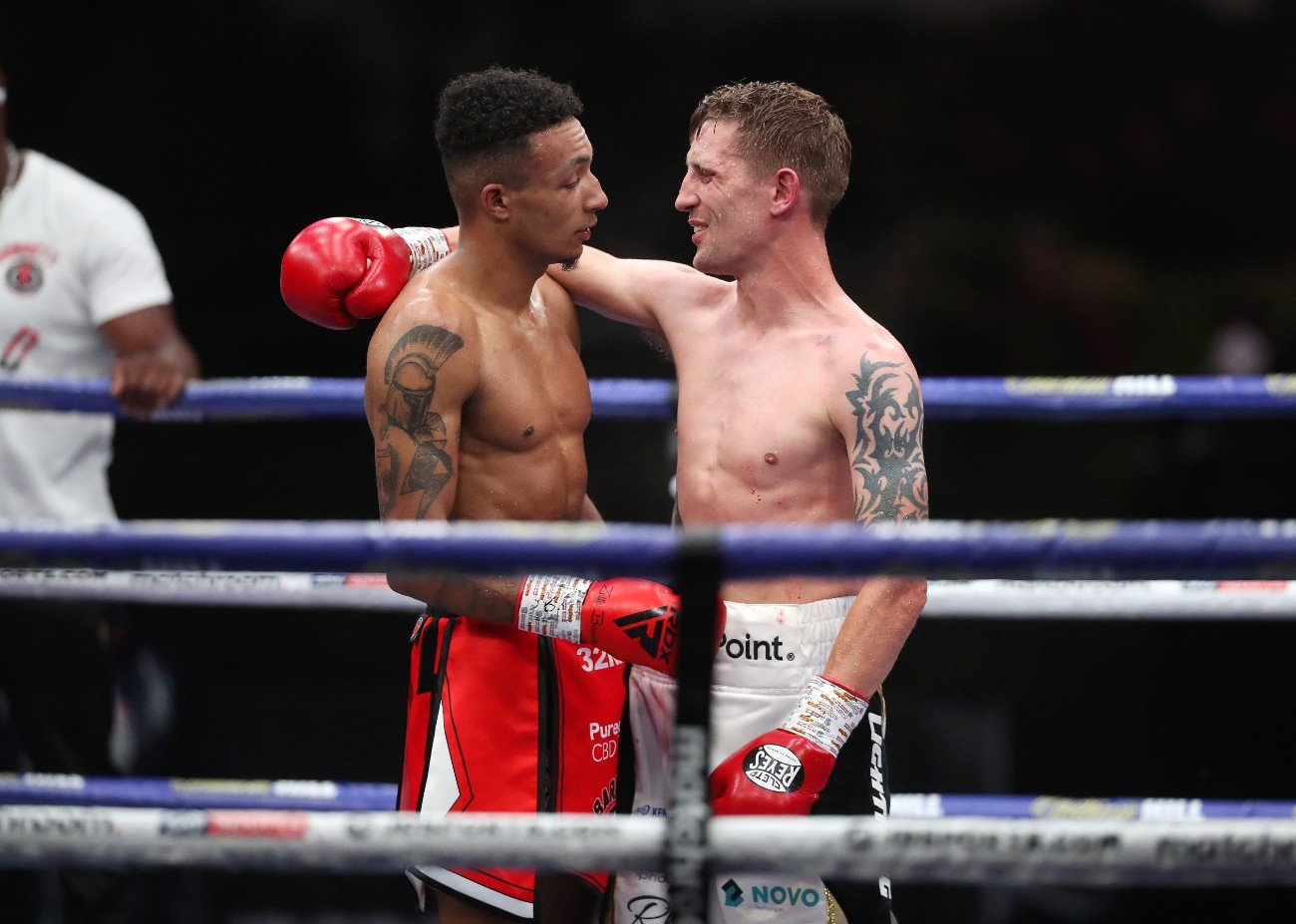 “I had to find it in the bag because he was hitting me with some good shots, and I thought, ‘you know what, I’m not letting this guy beat me.’ It was just a war mode. I timed it perfectly, and I couldn’t have asked for anything else. I caught him—credit to Eric Donovan. I’ve just defeated an undefeated fighter. As soon as I put him down, I thought, ‘that’s it, I’m getting you out of here.’ He’s a good fighter, but I’m going to pull myself together, go back to the drawing board and do what I’ve got to do.

Shannon Courtenay’s unbeaten record was shattered as she was floored and defeated on points by Rachel Ball.

The 27-year-old ‘Baby Face Assassin’ hit the canvas heavily in the opening round, and Courtenay’s spirited response was not enough, with Ball digging deep to claim victory with a 77-75 margin.

“To be honest, when I was in the corner, and I threw the shot, she dazed me a bit, so I didn’t know what had hit her. I thought, ‘fantastic, this fight isn’t going to last.’ She does hit hard. There is a reason why she has been knocking these girls out. I’m happy I got through the fight.

“I’m pleased with myself. I knew I landed the shots because I can feel it in my knuckles. I was just glad to get through it. I don’t think I used all of my technical ability, to be honest, but it’s all progress, isn’t it? I’ve just got to get back to the gym and progress even further now.” 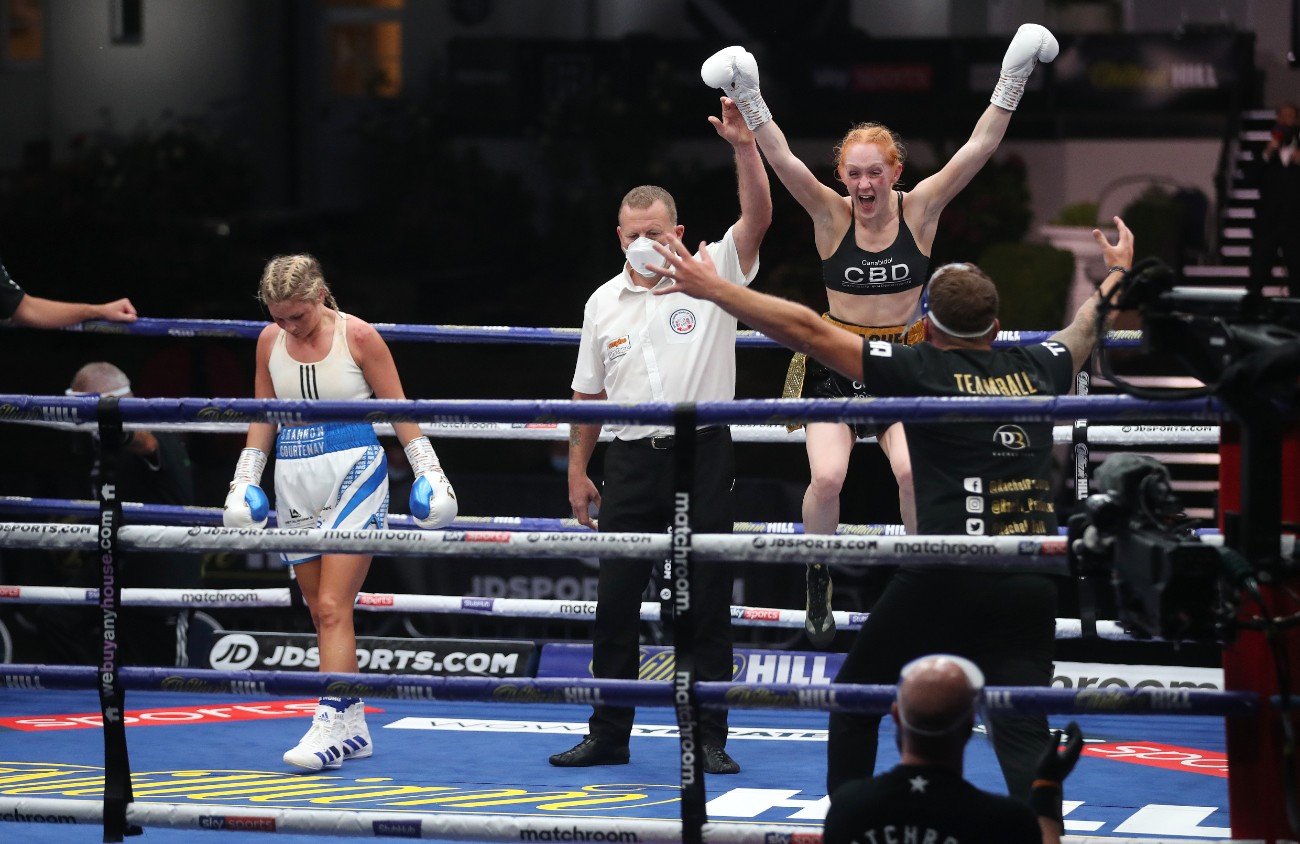 Kieron Conway overcame a spirited start from Navid Mansouri to seal a wide points victory and claim the vacant WBA Intercontinental Super-Welterweight Title, the first belt of his professional career.

‘Too Class’ gradually took command, nearly stopping Mansouri with a seventh-round onslaught, but had to settle for a unanimous points win with scores of 99-92, 98-92 and 98-92.

The win keeps Northampton’s Conway in contention for further domestic showdowns in a red-hot Super-Welterweight division that contains the likes of Ted Cheeseman, Anthony Fowler, and Scott Fitzgerald.

“I loved it,” Conway told Matchroom Boxing afterward. “Apart from having no crowd, I think the whole setup is how all boxing shows should be. The week has been really nice. It’s been really good to be around. Everything just ran so smoothly. Out there, it’s unbelievable. Even without thousands of fans, it’s wicked out there. I knew that he would come out fast, and I knew that after a few rounds, my size and my strength would come out on top. I’m a big lad now. I’m refueled and everything. I’m big for the weight. It drains people.

“I planned to have a slower first few rounds. The whole fight went exactly how I’d planned, except it went ten rounds. He did really well to get through it to be fair. I was landing a lot of shots with a lot of spite behind them. It was good. I didn’t expect the flicky jab; I expected him to come for me a bit more and really try and stick it on me a bit more. After a few rounds, I knew he’d starting messing, trying to smother me because I am stronger than I look.

“As soon as people realize I’m not going anywhere, they start holding. He’s highly-rated, and he’s had a few title fights. He had the English title for a long time. Hopefully, it pushed me a little more up there. For my style, I think my size really helps. Over the years, a lot of people have said I’m behind them, and then all of a sudden, they’re behind me. I’m 24-years-old. Whether it’s now or later, I’m coming.” 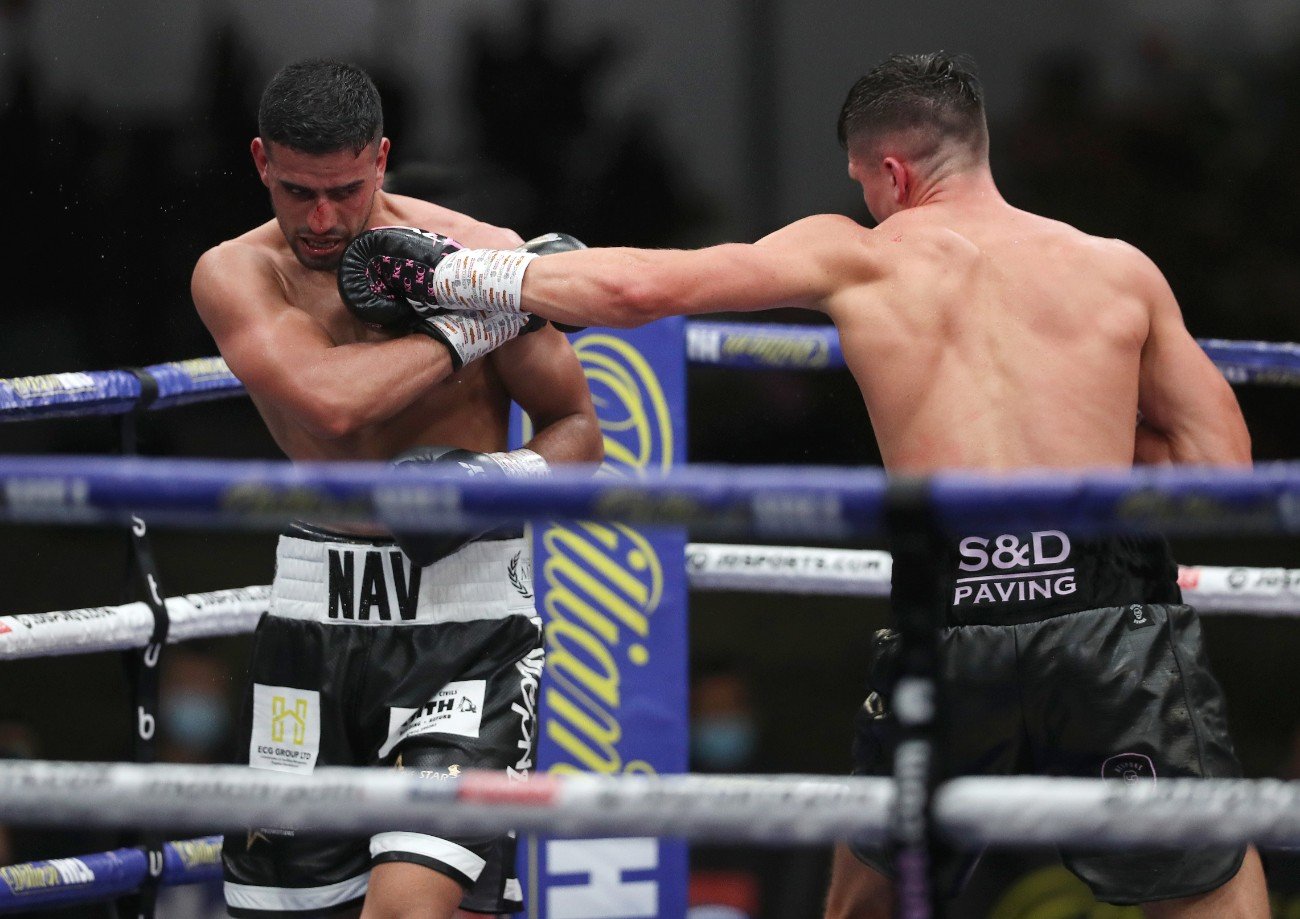 Montrose Super-Middleweight John Docherty became only the second man to stop the tough and game Anthony Fox in the evening’s opening bout at Matchroom Fight Camp.

‘The Doc’ extended his unbeaten record to nine wins with an impressive seventh-round stoppage, the seventh knockout of his professional career.

The 22-year-old benefited from a debatable knockdown in the third round, but then pounded Fox to the canvas in the seventh before a follow-up assault forced the finish.

“I’m over the moon to have forced the stoppage,” said Docherty afterward. “I started off a bit slow, and I was throwing up my chin in the air, but I got there in the end. I felt him tiring in there in the third and fourth rounds with my body shots, and his power started to go. He was a lot stronger than I thought, and a lot more heavy-handed, but I got the job done.

“I thought he was going to come at me and have a go as he did in his last fight. I think he felt the power quite early on, and then he was on the back foot. He was a lot better than I expected. I want titles now. The journeymen, I’m passed them already, and my team knows that. Any title next. A British Title Eliminator or an Intercontinental Title, anything. I’d probably give myself an eight out of ten tonight.”

“I thought an eight was very harsh on The Doc,” said promoter Eddie Hearn. “I thought it was a great performance. Credit to Anthony Fox. These are the guys we want to come in and test these great young prospects. The reason Anthony Fox got stopped is that he tried to win. He kept throwing, and he kept trying to stay in the fight. If he would have gone on his bike and grabbed and held, then it might have gone the distance.

“We want the guys that are coming to win. That was a great fight for John. I think I agree with him, onto British Title Eliminators now. Once we get the crowds back in these venues, he’s going to be a big draw up in Scotland.

Sitting there watching those fights thinking this kid is going to be in some very very exciting fights. He can punch, he’s still a little bit keen when he jumps in with his chin, the chin is in there a little bit, he’s going to work on that. 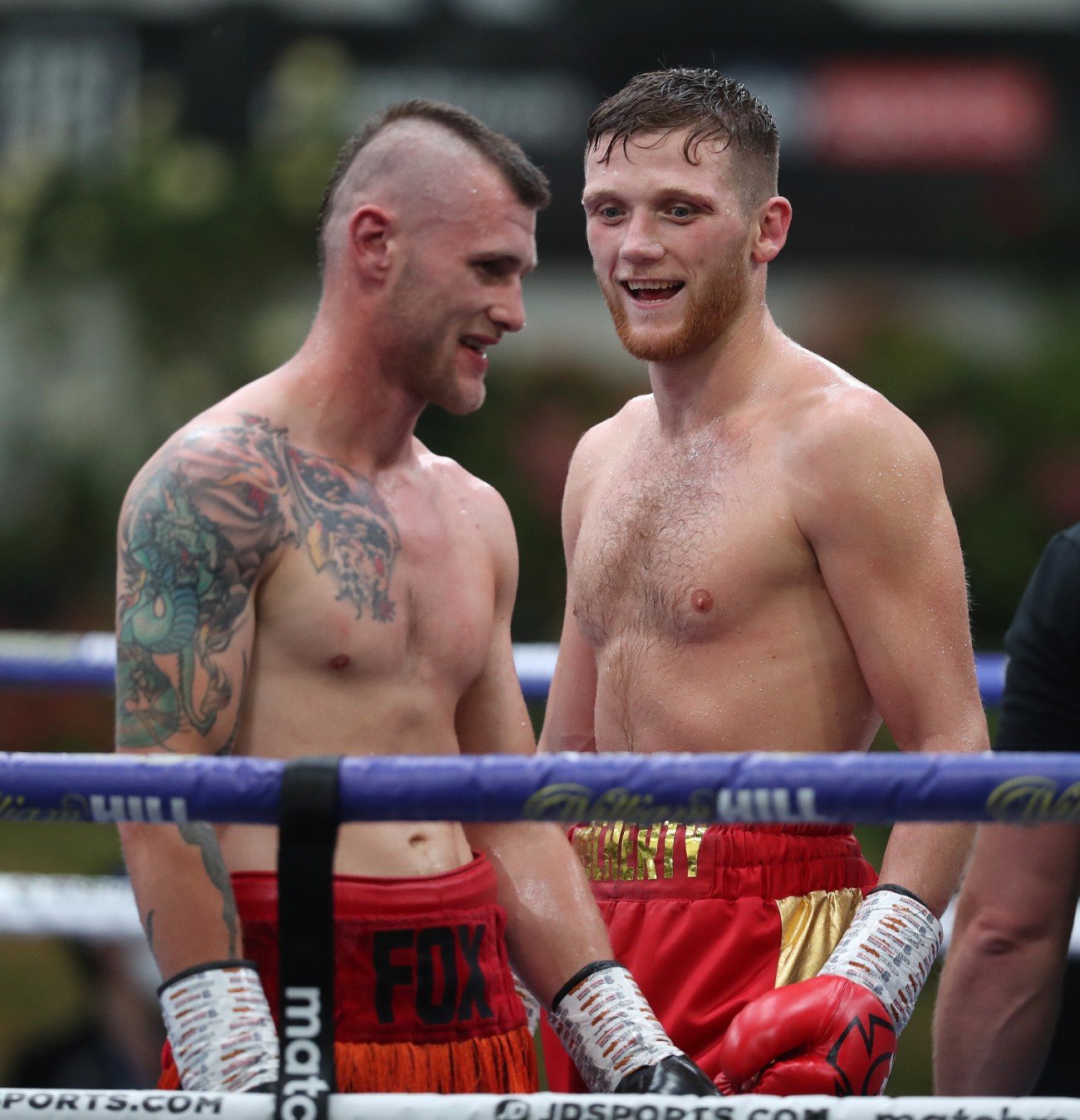 A really great fighter, great amateur pedigree, ready to move on now. I think to get one more in this year, maybe an Eliminator for the British Title, and then titles in 2021 for sure.”