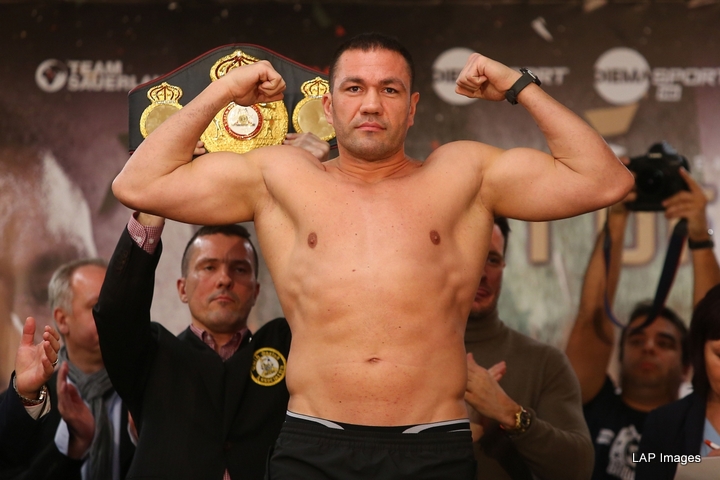 Just days after a big heavyweight title fight between WBC champ Deontay Wilder and Luis Ortiz fell through, a second world title clash in the sport’s glamour division is also said to be in serious jeopardy. According to various reports, Bulgaria’s IBF mandatory challenger Kubrat Pulev is injured and his October 28 challenge of IBF/WBA heavyweight ruler Anthony Joshua will have to be postponed as a result.

According to reports, Pulev has injured a muscle, or muscles in his shoulder. Apparently the injury occurred some ten days ago in sparring but has been kept undisclosed until now, with the fight just a short 12 days away. Tickets for the fight that was to be staged at The Principality Stadium in Cardiff, Wales sold in excess of 70,000 and right now promoter Eddie Hearn has one big, frustrating mess to deal with.

Unless the reports coming out of Bulgaria turn out to be exaggerated, or unless a suitable replacement challenger for Joshua can be found in time, it seems the big Sky Sports pay-per-view show will have to be cancelled – with some reports suggesting Pulev, who will of course remain as Joshua’s IBF mandatory, will be unable to fight again until next spring.

We must of course await further developments but things certainly do not look good. It’s all speculation and nothing more at this stage, but some reports suggest Dillian Whyte – who was to have faced Robert Helenius on the October 28 bill – may now step in and face Joshua in what would be a rematch of Whyte’s exciting December 2015 stoppage loss to Joshua. Carlos Takam is also a name being put forward as a possible late replacement for the once-beaten Pulev.

On the successful streak he is on right now, it’s unlikely Joshua will be content to remain inactive until next year, so maybe we will see AJ box against someone else a week on Saturday.

Hopefully we will get full clarification regarding these possibly very disappointing events some time tomorrow.