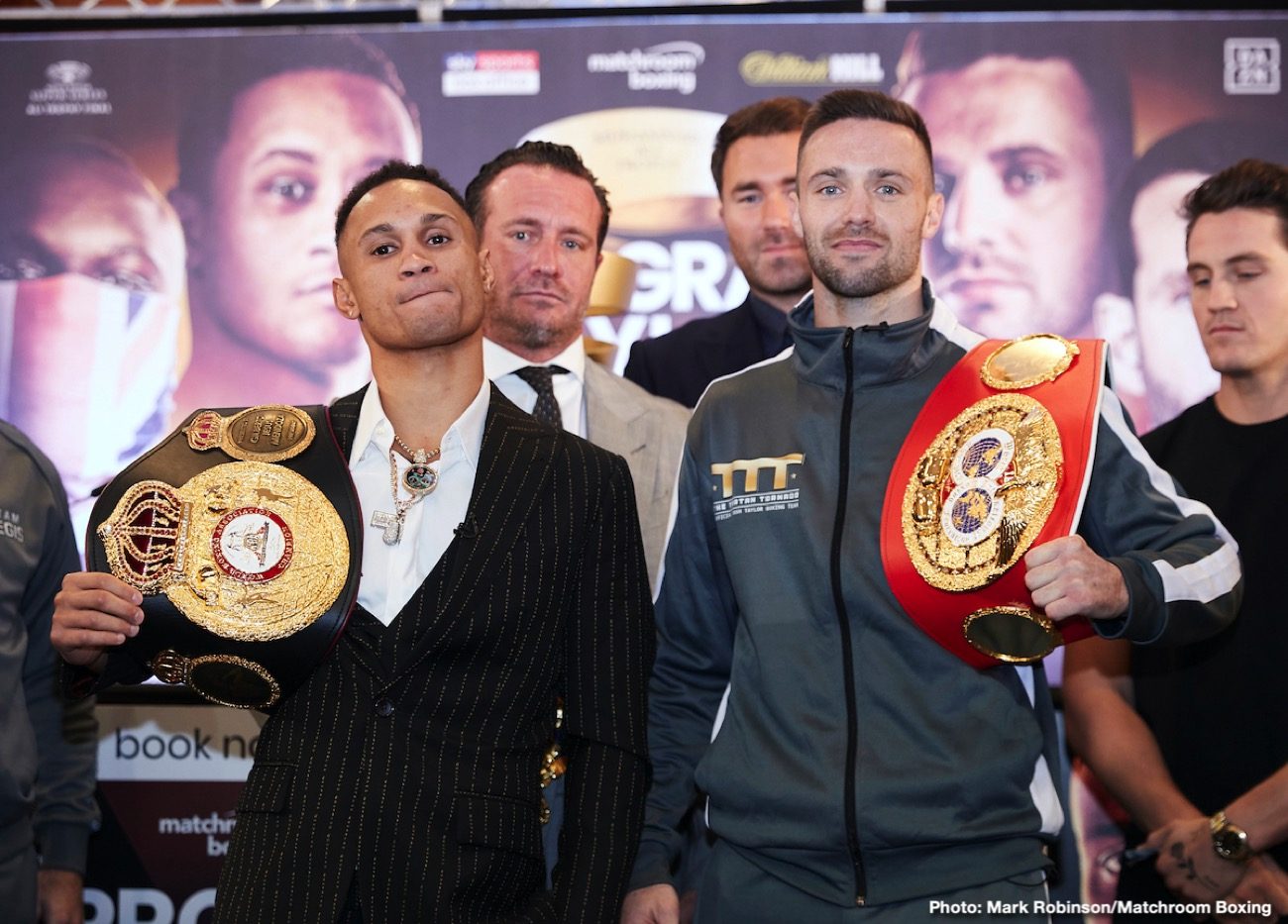 “Good afternoon London, it’s great to be here and this is it, the Super-Lightweight final for the Muhammed Ali Trophy. I am very honoured to be sitting up here with two great athletes, warriors, fighters, fighting for the greatest prize in boxing. The winner of this fight will be the best man in the division, we saw it with Oleksandr Usyk and Callum Smith and these guys have got here not because we have put them together in a great fight but because they fought the best to reach the final.

“On Saturday we will see the best vs. the best to find out who the man to beat at this weight class is. In a day and age of so many titles and confusions in this sport, its nice nice to have a simplistic format of a quarter final, semi final and final and we have had some dramatic fights up until this point.

Prograis vs. Taylor = one of the biggest stages in the world

“We’ve had both Prograis and Taylor become World Champions and now we have it, on Saturday on what we believe is one of the biggest stages in world boxing. We have seen so many great fights here over the years at The O2 and Saturday night is about the best vs the best, the caviar of boxing. Two guys putting it all on the line for us, they didn’t have to enter this tournament but they did it to put themselves on the line!

“Great credit to Prograis and to Taylor who have fought the best to be here, and were really looking forward to seeing the Champions League Final of boxing on Saturday night.”

“What a card on Saturday night! Conor Benn, Lawrence Okolie going for the European title against Yves Ngabu, Shane McGuigan in his corner. A brilliant domestic battle between Ricky Burns and Lee Selby, a mouthwatering Heavyweight contest between Derek Chisora and David Price which is headlined by this amazing fight.

“One of the great things about the WBSS is that not only are we getting the best vs. the best but we’re getting it very quickly. I have to be honest If I was promoting Josh Taylor after that amazing win in Glasgow I probably would have taken a couple of easy defences! The great thing about the tournament for the fans is that they go straight into a unification match.

“The best fight in the 140lb division with both guys coming off stunning wins. Regis looked great in his win against Kiryl Relikh and I was lucking enough to be up in Scotland to watch Josh Taylor’s great performance against Baranchyk where he won the IBF World title.

A lot on the line for Prograis-Taylor fight says Hearn

“The Ali Trophy is on the line in this fight but also the World Championship belts of both men and the vacant Ring Magazine belt as well! Whether you feel that the titles, the Ali Trophy or the Ring Magazine belts carry the most weight in boxing, they’re all on the line in this fight, so everybody should be happy that we’re getting the best vs the best.

“I’ve not got any association with these two guys so I get to sit there as a fan and just watch a great fight! Regis Prograis is a man who has been talked about in the States for a long time. Lou DiBella has been blowing the horn of Regis for a long time and he has an incredible story coming from New Orleans where we know he is very popular.

“Josh Taylor has exploded onto the scene with world class performances and I really believe that both guys have a great opportunity to become stand-out stars in the sport on Saturday night. We are going to have 15,000 fans packed into the arena and the atmosphere is going to be incredible.

“As always we are live and exclusive on Sky Sports Box Office in the UK and we thank our partners DAZN in the states. I wish both guys the very best and Regis all the media you have done has been incredible. I can’t see anything but this being a fight of the year contender, we have been lucky enough to already have two fight of the year contenders in October and this can only follow suit. We can’t wait!”

“I echo Eddie’s words and Kalle’s as well, its wonderful to have these two fighting at The O2! It’s a perfect finale to what has been a fantastic series and the winner of this is going to be in a phenomenal position. They are both wonderful fighters!

“This is going to be a great night from top to bottom with some wonderful fights on the card.”

“He should be able to land a solid, flush punch on me and when that happens, nothing will happen. When that happens, things will change, he will realise that I am an iron-man with an iron jaw. Once he lands his hardest shot and I look at him with a face of disdain, he will think: ‘damn, I’m in trouble’.
“I’m versatile, that’s the biggest differences. My last 10 fights look different. When I hit you, I hurt you.

“It was a great thing to come here three weeks ago because I am comfortable and adjusted to the weather, food, people.

“He gets hit. Josh has been hurt against Ivan Baranchyk and Viktor Postol who aren’t punchers like me. They’re not sharp, crisp like me, they don’t have the timing that I do.

“After his fight in Scotland I told him: ‘If you get hit by the same punches by me, you’ll get hurt.'”

“Twenty-two of his fights have been against absolute nobodies, people who haven’t fought since, journeyman. It is a padded record.

“He’s not under my skin. I’m ready to fight. My mind-set is starting to change now, I’m in fight mode. I’m sick of the sight of him.”

“It’s the pinnacle of boxing isn’t it. It’s two World Champions boxing each other for a unified title on Sky Sports Box Office at The O2 arena. And it’s something that, as Eddie mentioned, Josh has kind of gone under the radar and bounced onto the scene. We’ve spent four years working behind closed doors with Josh Taylor, building him up and making sure that he’s prepped and ready for this occasion.

“Camp has gone brilliantly, everyone always says that but it really has gone brilliantly. He’s razor sharp and he’s ready for whatever Prograis brings to the table. I think you see the best of Josh Taylor whenever he’s up against it, he’s definitely up against it on Saturday night. Prograis is a good puncher, he’s got very good distance and control and they’re raving about him in the states. I know my man is going to win and I don’t believe that it’s going to go the distance.”

“When you see something like what happened to Patrick Day you realise just how much you have to appreciate the men and women that walk into that ring for our entertainment and the risks they take to entertain us. One of the best examples of that is coming this Saturday night. The two best 140lbers in the world are going to meet in the final of the World Boxing Super Series.

“I have nothing but respect for Josh Taylor. You’re not going to hear me say a negative word about him or his team. I have long believed that the two best 140lbers in the world are Regis Prograis and Josh Taylor. I think on Saturday night Regis is going to prove that he is the number one 140lber on the planet and Josh is number two. Josh’s team feel differently. Time will tell.

“At this moment in time it is hard for me to be as enthusiastic as I might otherwise be but I’ll tell you that I am expecting a great sporting event, a great boxing match and the best of what our sport can offer on Saturday night. My greatest wish for both of these guys, other than a Regis Prograis win which I expect, is that they both leave after giving a tremendous effort where they give everything that they have and they go home healthy to their families.”

“I want to thank everybody for being so courteous to us here and making us feel at home. I want to thank our whole team for the past eight weeks of camp, from training, to PR, to marketing. They’ve all done a tremendous job.

“But most importantly I want to thank Regis. He has really embraced it, done everything that we have asked him to do and he’s loved doing every single one of them. He loves the UK fans and we’ve been promoting this fight feeling like we’re at home.

“Now we’re two days away we’re excited and we can’t wait. In two days the whole world will see his talent. October 26, buy the PPV and buy the few remaining tickets. You’re about to see a man continue to build his legacy and this fight is part of his legacy.” 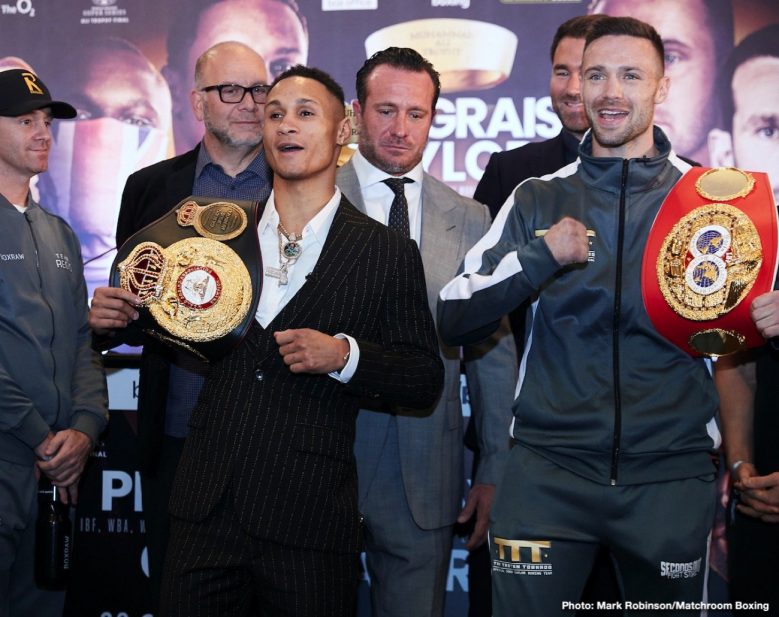 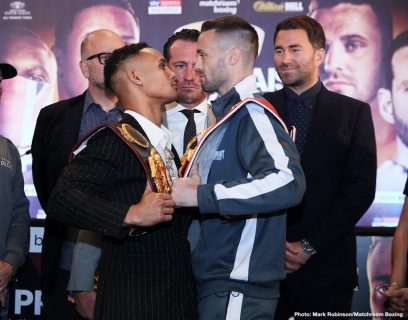 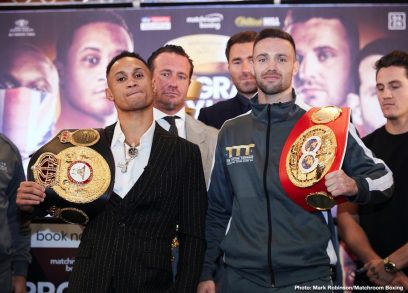 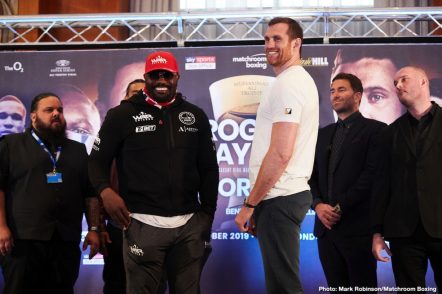 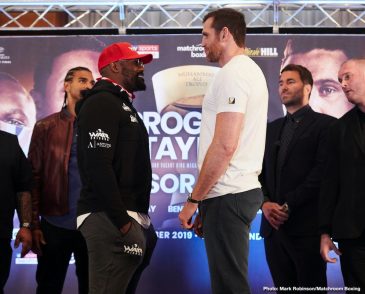 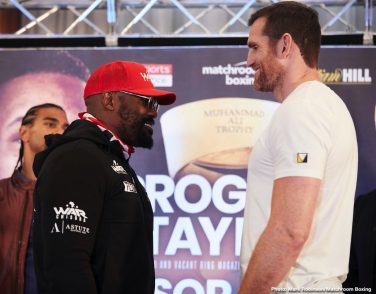 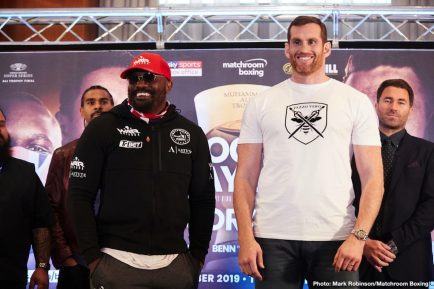 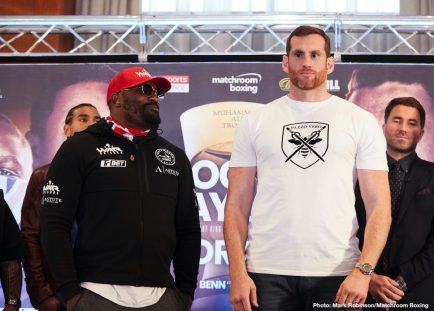 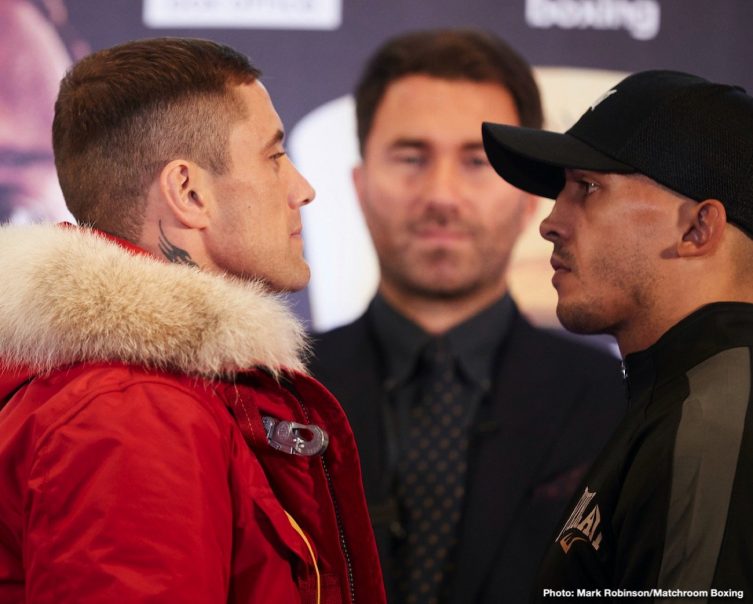 Ricky Burns and Lee Selby Final Press Conference ahead of their fight at the o2 Arena on saturday Night. 24th October 2019 Picture By Mark Robinson. 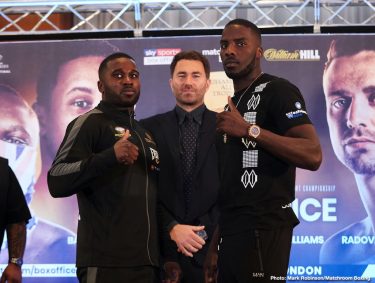 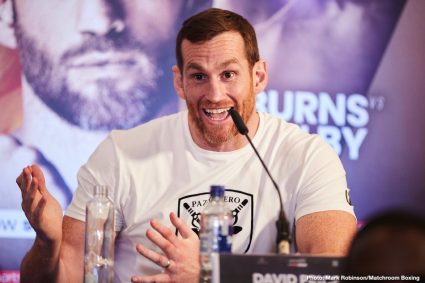 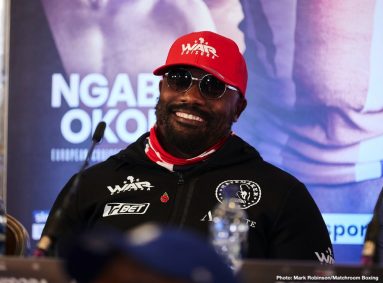 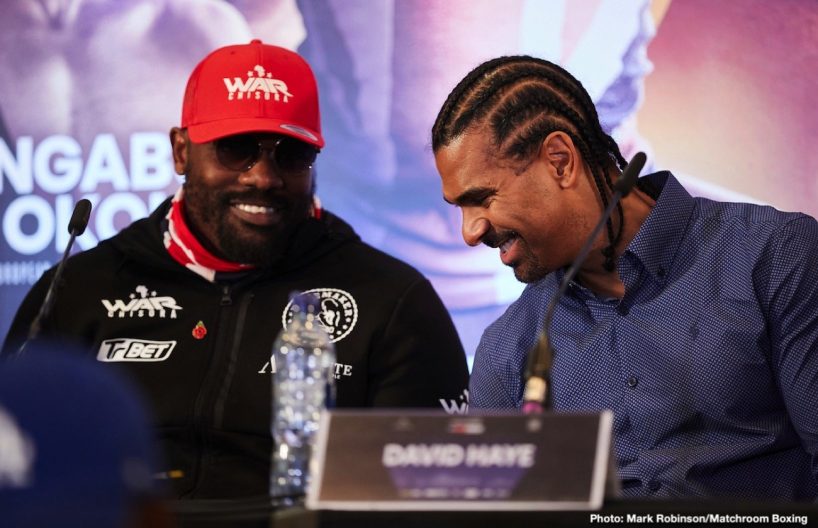 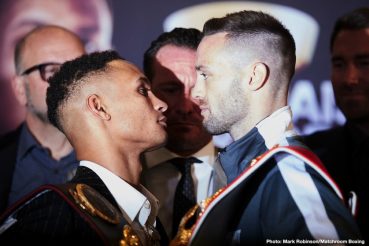 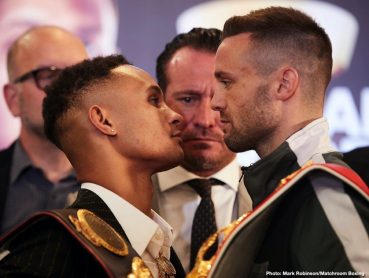 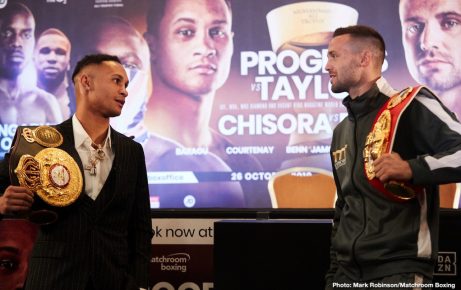 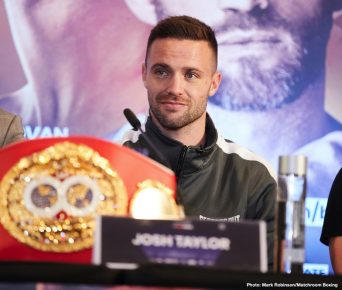 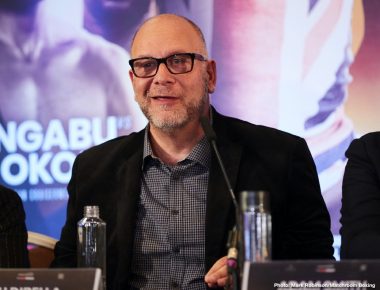 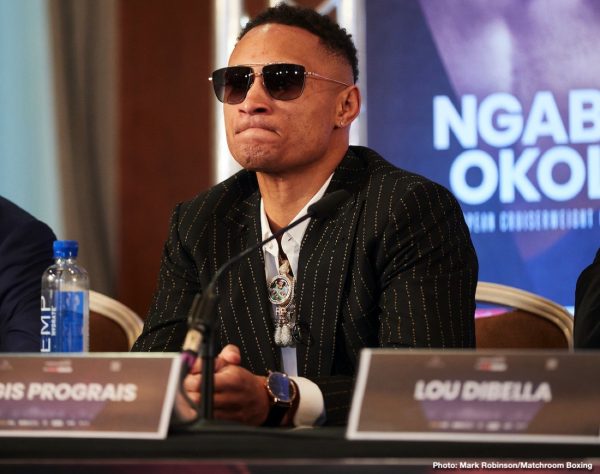 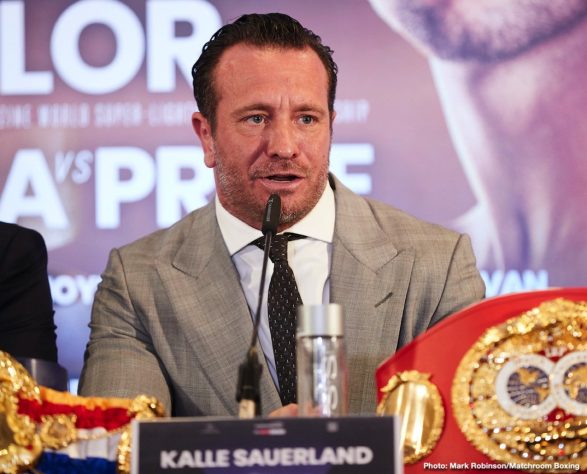 On This Day In 1995: The Legendary Manny Pacquiao Goes Pro948 Total Shares

On This Day In 1995: The Legendary Manny Pacquiao Goes Pro948 Total Shares
Andy Ruiz and Teddy Atlas: Could They Work Together?558 Total Shares
How Shocked Would You Be If Fury Knocked Out Wilder?490 Total Shares
WATCH Live: Deontay Wilder vs. Tyson Fury 2 rematch Live Stream230 Total Shares
Joe Joyce and Daniel Dubois agree to terms, will fight on Apr.18 in London191 Total Shares
Andy Ruiz In Need Of New Trainer After Split With Manny Robles126 Total Shares
18 Years Ago: Vernon Forrest Beats Up “Sugar” Shane Mosley; Would He Have Done The Same To Floyd Mayweather?113 Total Shares
Kell Brook On His “Dream Fight:” It Would Be An Errol Spence Rematch104 Total Shares
Canelo Alvarez vs. Ryota Murata in talks for May 2 in Japan82 Total Shares