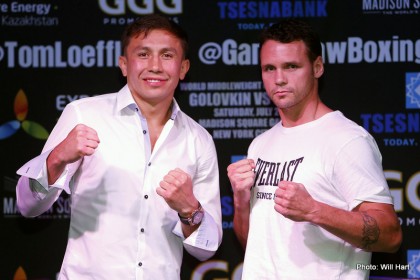 The Press Conference was hosted by the internationally recognized voice of boxing, Hall of Famer, MICHAEL BUFFER. (All photos/courtesy Will Hart.)

“I would also like to give express special thanks to our partner – EXPO-2017, an International Exposition dedicated to green energy scheduled to take place in 2017 in Astana, Kazakhstan.”

DANIEL GEALE—“This is a tremendous opportunity for me. I want thank HBO, Gary Shaw, Grange Old School Boxing and Madison Square Garden. This is a perfect fight for me and I look forward to the challenge of facing Gennady.”

BRYANT JENNINGS—“I want to thank Gary Shaw in addition to Antonio Leonard and James Prince. I also want to thank HBO. I’m very happy to be back on their network and back at Madison Square Garden.”

“Mike doesn’t like to talk much but I’m here to tell you that I will be the next heavyweight champion from the United States and I can’t wait for July 26.”

MIKE PEREZ—“I don’t have much to say but I look forward to facing Bryant Jennings on July 26 and fighting on HBO.”

Golovkin will be defending his WBA “Super Champion” Middleweight Title and IBO Middleweight World Title against Geale in the 12-round main event.

With the highest knockout ratio (89%) among all active champions, in addition to his extraordinary growth in viewership on HBO, Golovkin, 29-0-0 (26KO’s), has become a must-see attraction in the international sporting world.

In 2013, Golovkin scored four knockouts, three of which were telecast on HBO to outstanding viewership earning him plaudits for both Fighter of the Year and Knockout of the Year among many media members.

The Jennings/Perez bout will serve as the co-feature at “G4” with the winner of the 12-round bout becoming the mandatory challenger for the WBC Heavyweight Title, which was vacated by longtime champion Vitali Klitschko earlier this year.

The 29-year-old Jennings, 18-0-0 (10KO’s) is coming off his career best victory, a sensational, HBO televised tenth round knockout of Poland’s Artur Szpilka on JANUARY 25 at Madison Square Garden in New York City. Dominating the action from the outset, Jennings dropped the crafty southpaw in the sixth before finishing him off in the final round.

A highly successful amateur in his native Cuba, the 28-year-old Perez has compiled a record of 20-0-1 (12KO’s), since moving to Ireland and turning professional in 2008.

Perez has recently made two previous appearances on HBO and is looking forward to showcasing his skills against another undefeated fighter on July 26th.

JENNINGS VS. PEREZ is presented by K2 Promotions and Gary Shaw Productions in association with Antonio Leonard Promotions.

With a record of 22-0-0 (12KO’s), Hernandez-Harrison will be fighting for the third time on the undercard of a Gennady Golovkin world title defense.

Read: Andy Lee Scores Devastating KO Win at MSG on His Path to Title Shot
Read: Mayweather/Pacquiao: Will It Ever Happen?
Follow @boxingnews24