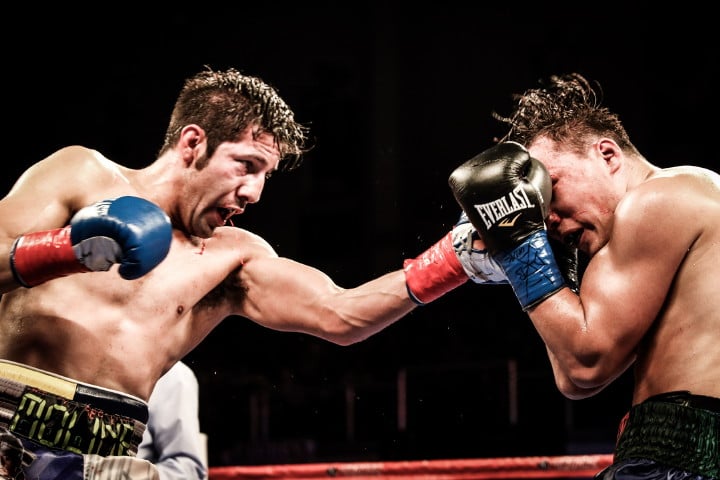 This was supposed to have been a war, but Molina had other ideas. He decided to use his jab to stay on the outside and pepper the 32-year-old Provodnikov all night long in the same way Mauricio Herrera did in his win over the Russian fighter many years ago. With the 5’10 ½” Molina sporting a nearly five inch reach and height advantage over the 5’6” Provodnikov, there wasn’t much the Russian fighter could do but take a pounding from the outside. He was too small.

Molina had gained a lot of weight overnight since the weigh-in on Friday, resulting in the two fighters looking two divisions apart in size. Molina looked like a junior middleweight at the very least compared to Provodnikov, who didn’t appear to have put much weight back on overnight after the weigh-in.

Provodnikov’s right eye looked in bad shape in the later rounds from all the shots he’d been getting hit with. Molina was teeing off on Provodnikov in rounds 9 to 12. The fight was still in the balance, but Molina pulled away and won based on his better work in the championship rounds.
The defeat was a bad one for Provodnikov and potentially for Showtime, who recently signed he Russian fighter to a multi-fight contract.

It’s hard to know where Provodnikov can go from there. He now has lost three out of his last five fights. He could have fought for a world title against WBO light welterweight champion Terence Crawford, but instead, he chose to face Molina. Losing to Crawford wouldn’t have been bad as losing to #8 WBO Molina.

Undefeated Dejan Zlaticanin (22-0, 15 KO) defeated Franklin Mamani (21-2-2, 12 KO) by a third round knockout to win the vacant WBC lightweight title. Zlaticanin hit Mamani with a left hand in the third round that buzzed him. Zlaticanin then finished him off with a flurry to get the stoppage. The fight was stopped by referee Charlie Fitch at 0:53 of the round. It was a good stoppage in a badly matched fight. Mamani did not belong in the ring with Zlaticanin. The fight was one by Zlaticanin the moment the contract was signed for the mismatch.

Former WBO junior middleweight champion Demetrius Andrade (23-0, 16 KOs) stayed unbeaten with a 12th round knockout over the fighter Willie Nelson (25-3-1, 15 KOs) in their WBC 154lb title eliminator. Andrade knocked Nelson down four times in the fight, dropping him in round 1, once in round 11, and x 2 in round 12. The fight was stopped after the second knockdown in the 12th.

Andrade had this to say after the fight: “Every great legend has a story, and my story’s coming. I want to do what it takes to be the best. I’m willing to step into the ring with whoever calls himself the best at 154, and in the middleweight division when it’s time to move up. I’m not here just to show speed, I’m here to knock ’em out and put ’em to sleep. Anybody that starts with a C and ends with an O–Charlo, Canelo, Cotto–I want them all. I’m ready to fight anybody at 154. Demetrius Andrade’s storyline is still to come.”