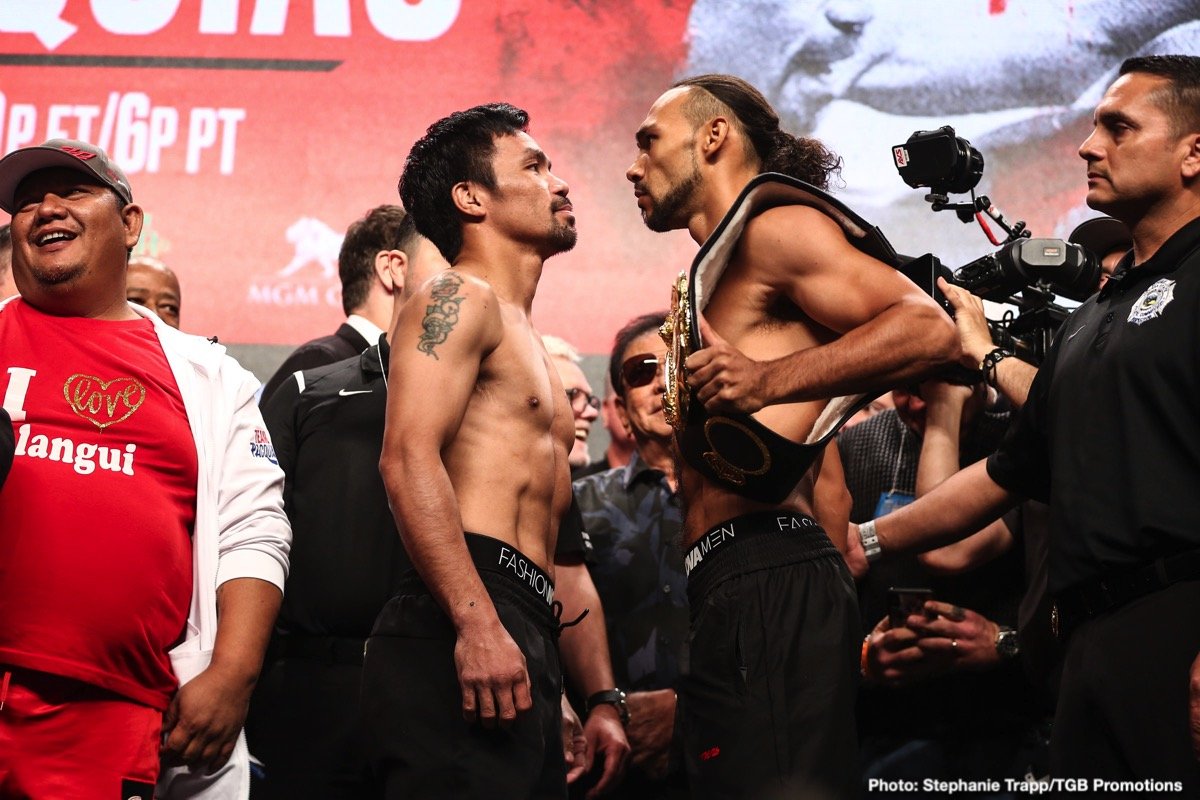 Less than 12 hours away from the big fight taking place at the MGM Grand in Las Vegas. The fight pits Boxing’s only eight division champion, Manny Pacquiao facing off against Super WBA Welterweight Champion Keith Thurman. This fight is filled with so many question marks – so let’s get right to it.

One of the biggest questions for both fighters is what version will we see of each. Will we see” In his prime” Pacquiao or the Pac Man that looked shot against Keith Horn or the resurrected version vs overmatched opponents Broner and Matthysse. For Keith Thurman, will we see the ‘One time” version that earned him that moniker, or the gritty champion we saw in tough scraps against Danny Garcia and Sean Porter or lastly the vulnerable Keith Thurman who survived a scare against J. Lopez and to a lesser degree against Luis Collazo. I think it’s safe to rule out and say the “In his Prime Pac” and the “One Time Thurman” will not be on display tonight. Pac is certainly no longer the guy we saw wiping out big welterweights in 2009-2010 and Thurman hasn’t been “One time”, since he stepped up in competition in 2014.

Here’s my take on fight: The only question I have is, will Manny, like so many other great champions age before our eyes in the ring tonight? I saw plenty of video of his training sessions for this fight. He looked great but this isn’t sparring or training. How many times have we heard other great champions say, they just couldn’t pull the trigger; in the fight that retires them….at least the first time they retire. That being said, there are a lot of things about Thurman that makes me think this could be a long night for him.. He’s a front- runner in every sense of the word. I expect him to look really good through the first 4 rounds…using head and foot movement with his jab to keep Manny at bay. What I don’t like about Thurman is, his punches don’t have the same snap once he gets past the 5th-6th rounds. This is where I think it could get very interesting.

Manny uses his in and out style, which I think you will see more in the early rounds with a clear emphasis on going to the body. I think he will respect the early power of Thurman. Once we go into the 5th, I think you will see Pacquiao coming forward and Thurman retreating. Keith does not react well when he’s pressured. Shawn Porter had the right idea with his pressure on Thurman, but he didn’t use enough effective pressure- not just coming forward. Manny has seen it all and is wily enough to accomplish that. When pressured, Thurman’s tendency is to retreat straight back, fight off his back foot and still try to occasionally trade wildly. I think it will be an entertaining night but my prediction is…

On the undercard, check out Caleb Plant. If your like me and love to see the Sweet Science at work- this Super Middleweight is fun to watch. Very rarely do you see a 168 pounder with skills like this.

You can reach Michael at MRCboxwithme@msn.com