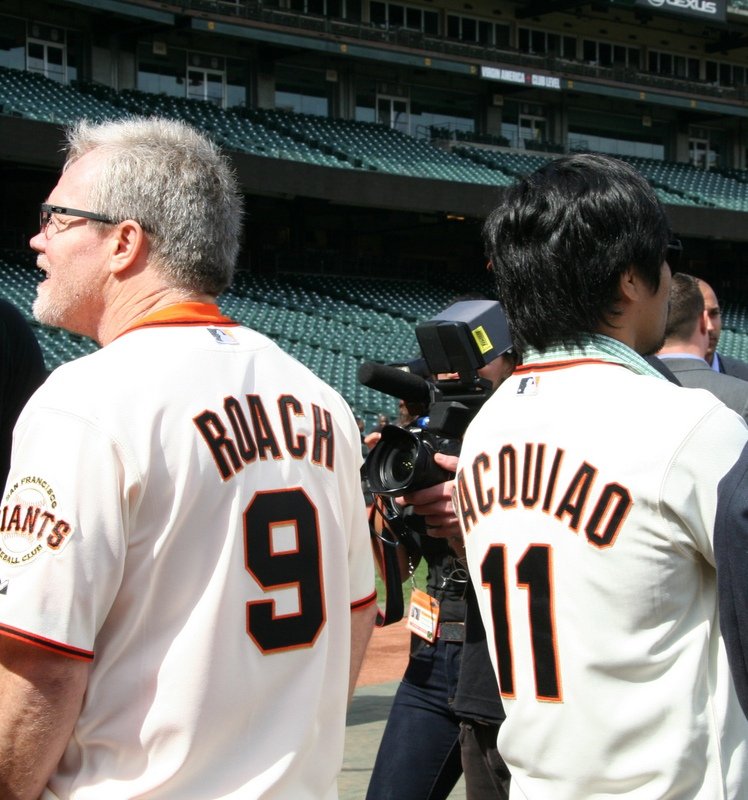 Yesterday, the AT&T Park, home of the San Francisco Giants welcomed team Pacquiao and team Algieri for their the press conference. Both teams were in good spirits, and while neither Pacquiao nor Algieri had anything crowd thrilling to say, there was enough appealing information to make the event worth attending.

Of course the question of Pacquiao vs. Mayweather came up numerous times as expected, but the response from Pacquiao was as default expected. Manny said that he is willing to fight Floyd whenever, and that any great fighter needs to fight other great fighters. Algieri grabbed the microphone and defended Pacquiao, suggesting that fights do not get signed and opponents don’t get picked as easy as the media believes it to be. Chris stated that fighters don’t just get to pick their rivals and fight them, instead claiming that there is a lot more that goes into this process.

As the conference continued, one of the media representatives spotted a large ball-like swelling on top of Pacquiao’s right hand. When asked about it, whether this has been there before, Pacquiao avoided talking about it by simply replying, “No.” Can whatever that is hinder Pacquaio’s performance? Depends on what it is. There is still an ocean of time before their fight, and I would assume that all issues would be addressed.

Next came the topic of Pacquiao’s political career. When asked about his possible retirement date based on elections, Manny replied that he cannot give a date right now because the elections are so far away. He made it seems as though he is not considering retirement anytime soon, which contradicts various previous reports that 2016 will be the year he will probably leave the sport and focus on politics.

As the fighters were practicing their batting skills, I asked Bob Arum to follow up on what he had mentioned to the San Francisco Chronicle about the Mayweather Jr. fight moving in the right direction. Arum believed that it seemed that everyone was interested in making this fight come to fruition, and that the only hiccup was team Mayweather themselves. He allowed himself some vagueness by saying that organizing such a fight is complicated, and two hours before the press conference he had a good conversation with Oscar De La Hoya. Whatever significance this news is supposed to carry, Bob continued to mention this in all of his interviews.

Touching on the topic of holding fights in China, Arum suggested that not all of the fights can be made there, and there they will switch between China, Vegas, and possibly Dallas Cowboys Stadium. He went on to tell me that financially, as Chinese people are starting to show significant interest in the sport of boxing, organizing the fights there makes perfect sense. I would imagine that the tax breaks is the only thing that brings them to Macau, as PPV numbers are unlikely to outperform the U.S.

When talking to Algieri, it seemed as though he was calmed than most. He told me that this fight, aside from carrying an immense amount of significance as far as his future career is concerned, is not different than any other. Chris promises to train hard and stick to his game-plan. He was adamant about his respect towards Pacquiao, promising that he understand who he is fighting and the capabilities of his superstar opponent.

Finally, I came up to Freddie Roach, seeking to understand the process of their training and the potential future fights. Roach mentioned that they will train in General Santos City for the fight against Algieri, as it makes sense when fighting in China, as well as it being a lot more private than training in Manila, which they have done before. As far as Mayweather is concerned, Roach held his opinion steady proclaiming that Floyd is not the same anymore, and that time is clearly taking its toll.