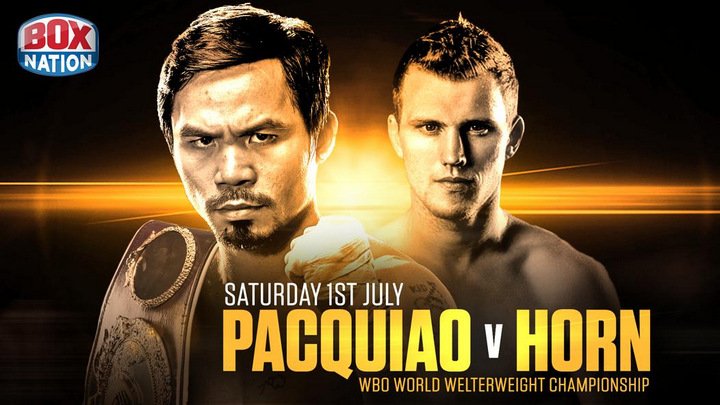 Manny Pacquiao headlines a non-PPV broadcast for the first time in over a decade on ESPN this coming Saturday. The real fight of the weekend matches Robert Easter Jr. in his second title defense against mandatory challenger Denis Shafikov, Friday night on BounceTV.

Manny Pacquiao versus Jeff Horn is an infomercial for Australian tourism and the first stop on Pacquiao’s world tour. His promoter Bob Arum recently made reference of the Philippines as a possible landing spot for his next outing let’s hope a meaningful fight is on the horizon. Horn was obviously chosen solely due to his residency because he hasn’t beaten anyone remotely good enough to earn a Pacquiao fight let alone have a legit chance in beating him.

It’s a showcase to kick off Top Rank’s new deal with ESPN that will likely draw a great rating. Also, it helps pave the way for names such as Terrence Crawford and Vasyl Lomachenko in competitive fights on the network. Unless Manny grows old overnight he will beat and quite possibly stop fringe welterweight contender Jeff Horn.

On to the legitimate matchup, Easter Jr. versus Shafikov which is a toss-up bout taking place in Toledo, Ohio this Friday on Bounce TV. Robert Easter Jr. gets a return-bout back to his hometown of Toledo but this time it won’t be a walk in the park as was the case in February against Luis Cruz.

Mandatory challenger Denis Shafikov represents the toughest opponent to date for Easter Jr. Shafikov put on a sturdy performance against another slick fighter in Rances Barthelemy in late 2015. It may have been a loss, but Shafikov showed what he was made of and built off that performance in 2016. About a year ago last July, Denis pulverized unbeaten prospect Jamel Herring. Then in December outworked and out-brawled a quality fighter Richard Commey in a title eliminator shot.

When breaking down Shafikov’s aggressive southpaw-style, a few things standout that give him a great opportunity to leave with the IBF lightweight strap. The Russian has good hand speed and a very quick jab that keeps his opposition occupied. He loves to attack the body with both hands and generally throws hooks in combinations to the head or body. What makes him dangerous offensively is that jab and upper body movement on defense at close range. Range will be very important to the shorter and smaller guy having to deal with Robert’s long limbs.

Speaking of length it will be very interesting to see if Easter Jr. uses that major advantage. A super-long jab and lateral movement is the best kryptonite for Shafikov’s bare-down approach. The home town champ can make this a much cleaner fight if he remains patient in the first half. Patience early will allow him to rack up the points and get a lead on the scorecards. Once Easter Jr. is able to time Shafikov with counters then he can open up more on offense.

When and if that time comes the Toledo native throws a mean left hook to the body and a scorching-hot uppercut. Even his basic jab followed by a right hand is impactful. That’s all fine and dandy on paper but once in the ring under the lights with the crowd roaring ‘Bunny’ has a tendency to mix it up. Robert did it with Richard Commey and it damn near added an ‘L’ to his record. Although it looked like he got the message in his last fight the ironic thing is he didn’t need to take his time in that one.

My guess is Easter Jr. will come out on game plan and won’t detour from it as much as he did against Commey. It will likely be short bursts of offensive and exchanges with in the three minutes instead of whole rounds. The first part of this fight will be competitive and compelling as each man wins long portions of a round. A tug of war will play out until Easter Jr. lands a game-changer that swings the momentum his way for the remainder. Shafikov is a tough son of a gun with a good enough chin to last the distance.

My official prediction is Manny Pacquiao by mid to late stoppage and Robert Easter Jr. by majority decision.