Does Tommy Farr deserve to go down as one of the greatest Welsh warriors of all time? You sure wouldn’t get shoved out of any debate in a bar if you fought Farr’s corner. In over 140 pro fights, Farr was stopped just 6 times; with guys like Max Baer, Jimmy Braddock, and Lou Nova failing to take Tommy out (Farr boxing the murderous-punching Baer twice, winning one losing the other).

And, in the fight he is most famous for, Farr went the distance with the legendary Joe Louis. It was on this day – August 30, in 1937 – when Louis made his maiden title defence. Meeting Farr, a massive underdog who was widely expected to be knocked out by “The Brown Bomber,” in The Bronx, New York, Louis was instead given one of his toughest fights.

Louis had had a whole lot less fights than his challenger, while Joe looked somewhat flat in the fight, somewhat tired. Farr took the fight right to the defending champ, showing zero fear as he attacked Louis’ body, threw hooks, and then began launching his right hand. With the 50,000-crowd shocked, Louis was being made to work hard.

Louis’ shots inflicted damage on Farr’s eyes, and Joe tested his challenger’s chin. Farr’ beard passed the test and the “Tonypandy Terror” continued to push the new champ. Farr, his facial wounds pouring blood, had a great 8th round, his left hand blasting into Louis’ head. The crowd was on its feet.

Louis regained command, his vicious uppercuts and powerful jabs slamming into Farr’s head and jaw, yet still the gutsy challenger – who was neither running nor hiding – refused to buckle. Farr poured it on in the 15th and final round, going for the KO Louis was supposed to have registered long before this point in the fight. Louis countered his way to the bell.

The decision was unanimous in Louis’ favour, but the crowd booed, their mixture of displeasure with the wide decision (one judge, the referee, having it 13-2 in Joe’s favour) along with their support of Farr being heard. When was Louis ever forced to hear booing?

Farr won over American hearts, while he returned home a hero. Louis admitted Farr surprised him, while the beaten challenger also displayed nothing but fine sportsmanship, with none of today’s all too common cries of “I was robbed.”

A return fight would certainly have been welcome, but for whatever reason, no return duel came. But Farr had done enough to be remembered; to go into the history books. As far as Louis’ world title challengers go, Farr might have pushed Joe harder than anyone aside from Billy Conn, and, right at the end of his incredible run as heavyweight king, the tricky Jersey Joe Walcott.

Farr was indeed one of Wales’ finest. That night 85 years ago, a staggering 10 million British fans tuned in to listen to the call of the fight on the radio. 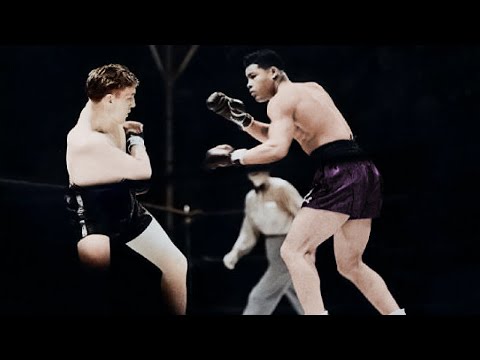