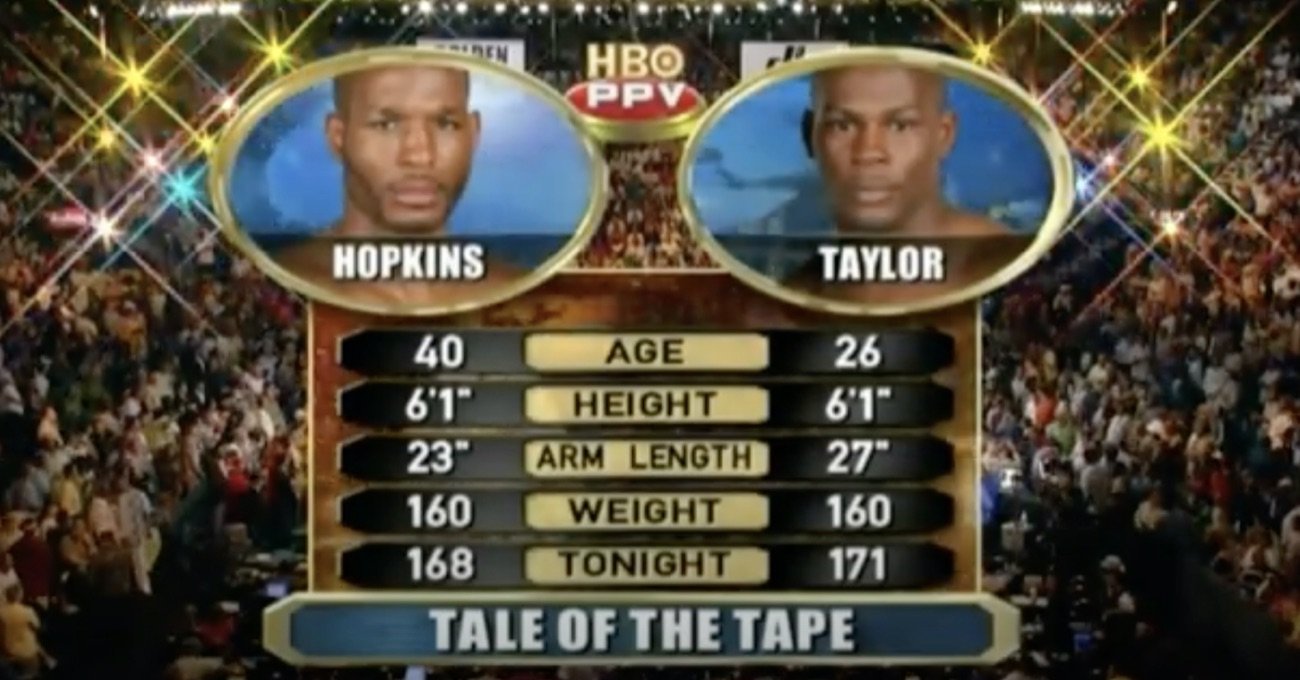 Bernard Hopkins had already made history, now he was fighting for even more. The legendary “Executioner” from Philadelphia had succesfuly defended his world middleweight crown an amazing 20 times, and against new star in the making Jermain Taylor the fantastically conditioned 40 year old was going for title defence number-21.

Hopkins had not lost a fight since right back in 1993, when he had been widely decisoned by Roy Jones. Taylor was unbeaten at 23-0. “Bad Intentions” was also the younger man by 14 years. Would youth be served, or would the old master put on yet another smart, clever and commanding performance?

The fight was no classic, at least in terms of being a fire-fight. Hopkins did very little in the early going, not really upping his work-rate until the final third of the fight. Taylor was no buzzsaw of activity himself, yet the challenger was doing more work. Hopkins was soon falling behind, on the card of HBO’s unnofficial scorer Harold Lederman anyway.

Hopkins was throwing around 25 to 30 punches a round, this not enough for him to bank the rounds in the opinion of Lederman and others. But at the same time it was clear the fight was close (as it later transpired, it was very, very close). Hopkins was biding his time, allowing the younger fighter to get a little tired, a little lax with his defence, and then he would come on to score the late KO. The plan almost worked. Hopkins cracked Taylor with two hard right hands to the head in round-ten, Taylor hurt and looking to hold on for dear life. Hopkins was angry at the way Taylor clung to him, B-Hop giving referee Jay Nady a baleful stare. A point could certainly have been deducted from Taylor.

Hopkins hurt Taylor again in the 11th and he bossed the final round. But it wasn’t enough. Taylor, cut on the top of his head and not looking as animated as a man who truly feels he has won a fight should look, was awarded a split decision – 115-113 twice, the third judge going for B-Hop with a 116-112 tally.

“Did you wait too late in the fight?” Larry Merchant asked Hopkins, who replied with a firm “No.” But had he? Lederam thought so, also having the fight 115-113 for the new champion. But Taylor couldn’t stop talking about a rematch in his post-fight interview; even promising how he would “train hard” for the rematch. Did Taylor feel in his heart of hearts that he had proven he was the better man? It didn’t seem so.

But Hopkin’s reign had ended, after over a decade as champion. It was the end of an era, with Taylor going on to win the return fight that December. Hopkins was far from finished, as we know; ‘Nard going on to win many big fights, further proving his greatness and his ability at keeping Father Time at bay in doing so. But on the night of July 16, 2005, Hopkins was a beaten ex-champion.

Even if the majority of the media didn’t agree with Taylor’s win:

Indeed, there were not too many experts agreeing with the two judges who scored the fight for Taylor.

Watching the fight again 15 years on, it’s clear what a close, at times hard to score fight it really is. Who do YOU think won?