This one was just crazy – crazy carnage. If fight fans feel they witnessed a mid-ring ‘meltdown’ after the recent Oleksandr Usyk-Anthony Joshua rematch – with AJ suffering the meltdown due to the sheer frustration he was overcome with after again being bested by Usyk – they should take a look at the footage of the heavyweight fight that took place on this day back in 1960. Or rather fans with an interest in the surreal should look at the black and white footage of what happened after the fight was stopped

Welshman Dick Richardson met Brian London of Blackpool, with the European heavyweight title on the line. The fight took place in Porthcawl, Wales, and this bad-tempered brawl boasts arguably the most shocking scenes in British boxing history. 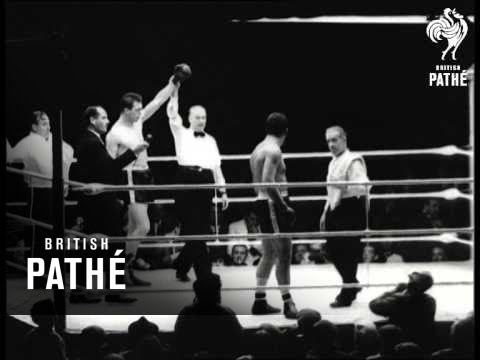 Defending champ Richardson was having a tough time with London, who had beaten him in an amateur encounter, and soon there were head-clashes – London insisting these were in fact deliberate butts slung out by Richardson – and some serious bad blood; to be followed by some actual spurting of the red stuff, the claret being London’s.

London’s eye was badly cut in the seventh round, the challenger crying foul. The 8th was wild, with both men screaming at each other, the fists, heads, and elbows flying. Then, with the fight being stopped due to the cut, the aborted fight entered the twilight zone.

London, fuming over the stoppage and over the way he had been fouled, completely and utterly lost his mind. London fired a punch at Johnny Lewis, Richardson’s trainer, and all hell broke loose in the middle of the ring. The two rival corners were now brawling in the ring, with London’s dad, Jack London, diving into the fray. London seemed to be unleashing leather at anyone who came near him, with fans also joining in the fun!

Arms and fists, both gloved and bare-knuckle, were all over the place. Richardson, however, had declined to pile in, instead sitting on his stool in his corner as London proceeded to destroy his own career. Eventually, “by sheer force of numbers,” as the well-spoken British reporter said in describing the chaotic scenes, the police managed to restore order.

London escaped a permanent ban, yet he was fined £1,000, this a substantial sum in 1960. London insisted he had gone to shake Richardson by the hand, when “some little fellow” chucked a punch at him, and this was why he had lost it big time. London also called for a rematch with Richardson – one that would allow butts from both fighters!

The rematch never came, but London did fight on, incredibly, for ten more years, with the trier fighting the likes of Muhammad Ali, Henry Cooper, and Jerry Quarry. London finished with a record of 37-20-1(26) – when his boxing career could so easily have been finished shortly after that insane evening in Wales. London died last year, aged 86.

Richardson fought on for less than three years, retaining his European title twice before losing it to Ingemar Johansson. Richardson exited with a 31-14-2(24) record. Richardson died in July of 1999, aged 65.

Together, Brian London and Dick Richardson gave their sport one heck of a night to remember. Or one to forget.