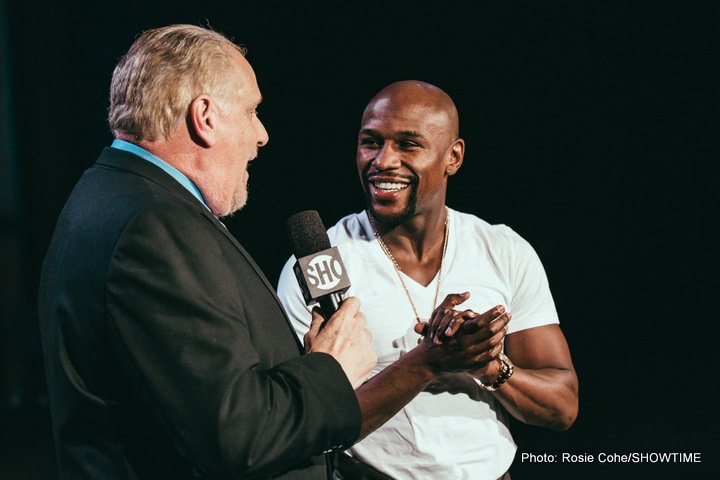 They fought just once yet there has been a long and quite intense rivalry between the two biggest names of their era for years; and it’s still ongoing: Floyd Mayweather and Oscar De La Hoya, two seemingly eternal enemies. Oscar, both before, during and after his 2007 loss to Mayweather, has had plenty to say about “Money,” even calling him a “wife beater” at one point.

While Floyd, in the years before his massive win over De La Hoya, and since, as rival promoters and celebrities, has scarcely had a nice word for “The Golden Boy.” Opening up with FightHype recently, Mayweather went into some detail regarding his ongoing feud with De La Hoya.

“My thing is this. I just think that honestly, Oscar De La Hoya never liked me. I think he never liked me, honestly,” Mayweather said. “He just thought that I was a loud mouth fighter that probably could fight a little bit and probably win a couple world titles. That’d be it. If you look at his boxing career, he jumped from trainer to trainer. My boxing career started in 1987. I’ve had two trainers…I’ve had two cutmen. I’ve had two trainers throughout my whole career — two cutmen, two trainers. You know but this is the same fighter [that wanted to fight like me]. The same fighter who wanted to fight just like me. You can pull up articles, and the articles will tell it all.

“Men lie, women lie, numbers don’t lie. We know that he hasn’t made more money than me. We know he don’t got more money than me. We know that I’ve always been a stand-up guy that can hold his head up high — meaning that he took shots at me, I guess he brought up domestic violence. I’m not a lawyer but all I say is this: people try to defeat me in many ways. People don’t like the truth, they shy away from the truth. They tried so many ways to offset me…I couldn’t be defeated on the inside [of the ring] so they tried to defeat me on the outside…

“Call me whatever you wanna call me, but call me a winner also. Don’t forget to call me a winner. Don’t forget to call me intelligent. So we look at this guy, ok, Canelo was in the biggest fight of his life — Floyd Mayweather vs. Canelo Alvarez — Oscar De La Hoya left him hanging. Remember that…The type of guy that I am is when Adrien Broner was gonna commit suicide, I called him and had a talk with him and brought him to me. That’s the type of guy I am.

It’s fair to say Floyd makes some good points, or isn’t it? Depends of your view of course and which of these two fighters you admire the most (and regarding the McGregor fight, yes, Oscar did call for it, but he has put that to bed now.) It sure would be good – and fair – if Oscar got the opportunity to respond to plenty of what Mayweather said about him.

Still, some bad blood never goes away, and it seems to be a case of this here.