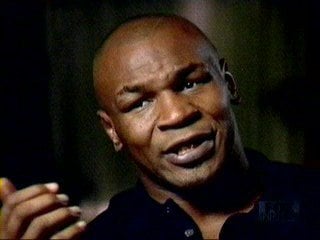 On this day in 2004, former two-time heavyweight king Mike Tyson was an ageing, past his best former superstar, fighting only for money – Fans liked to play the game in pretending that Tyson was still THE man, still the biggest puncher in the division, yet in truth the youngest heavyweight king in history was old, tired and looking to get out. That said, it was still one huge shocker when massive British underdog Danny Williams hammered Tyson to defeat, in an exciting slugfest, 15 years ago today.

Tyson lost for fifth time, yet there was one more embarrassment to come. Tyson hurt his knee in the Williams loss and at least had that as a partial excuse for his loss. But there would be no alibi for the stoppage loss Tyson suffered in June of 2005, to the big but lumbering Kevin McBride. Of the six losses he suffered, all of them coming inside the distance, the loss to McBride was perhaps the worst for Tyson fans to have to endure.

But how do Tyson’s losses – to James Douglas, Evander Holyfield (twice), Lennox Lewis, Williams and McBride – affect his legacy? Do the bad defeats take away from Tyson’s great wins?

Tyson in his prime was so destructive, so intimidating, so fast and powerful that nobody – absolutely nobody – expected him to lose. Ever. But the decline was quite swift in coming and many critics says Tyson was only a very good fighter, for a while, never a true great.

Douglas was a good, solid pro, yet that loss took a whole lot away from Tyson’s mystique. Holyfield is an all-time great, therefore there is no real shame in Tyson losing to “The Real Deal.” Lewis was simply too good for an aged version of Tyson, yet some people feel the fight would have been different had Lewis met a peak Tyson. But neither Williams nor McBride should ever have been able to beat even a near-forty year old Tyson.

Do these two losses hurt Tyson’s legacy as badly as he used to hurt his opponents?

Tyson scored some sensational wins over good to great fighters during his career: Larry Holmes, Michael Spinks, Pinklon Thomas, Tony Tucker, Carl Williams, Trevor Berbick, Razor Ruddock and Alex Stewart arguably being his biggest and best wins. Yet for many, those half dozen defeats have proven far more memorable.