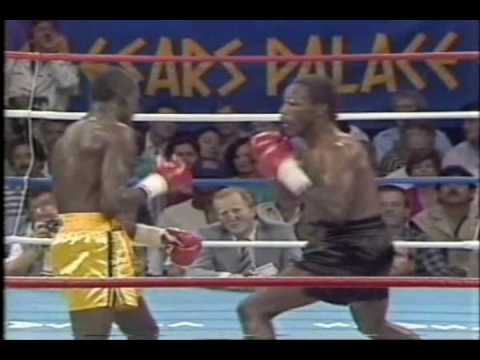 Known as “The Body Snatcher,” Jamaica’s McCallum was that and a whole lot more. During his 55 fight pro career – McCallum also enjoying a stellar, standout amateur boxing career – McCallum took on all manner of styles: be it monster punchers, slick boxers, relentless stamina machines or all-round tough guys. And make no mistake, each and every guy McCallum fought had a tough time with him; even those rare few who actually managed to beat him. Arguably, McCallum lost just once when he was in his prime.

Yeah, the born-exquisite James Toney fully deserved the decision he got in his second and third fights with McCallum, both of these fights going to the wire and both of them testing both men to the limit. And the once “Superman,” Roy Jones Jr had his way with a way past his best, but still enormously respected, McCallum in their 1996 bout (this being Mike’s penultimate ring appearance, before the third go with “Lights Out”). And one could argue how Sumbu Kalambay scored the most decisive win anyone ever managed when he got a decision over “The Snatcher” in his native Italy in 1988.

But aide from that, when he was in his prime, and even a few years before and afterwards, nobody – as in nobody – could live with McCallum and his bag of tricks.

No wonder the great Marvin Hagler wanted no part of McCallum (or so the legend tells us).

It was on this day, July 18, in 1987, that McCallum perhaps scored his most sensational and eye-catching win.

Going in with former undisputed welterweight king Curry, McCallum, defending his 154 pound crown, iced the hot one in dramatic, one-punch fashion. It was in the fifth-round, when Curry, thinking he was safely out of distance, was cracked by a perfect left hook to the jaw; the blow instantly sending him down and out. Curry wore a dazed, ‘what hit me’ look as he lay on the mat inside an equally mesmerised Caesars Palace in Vegas.

Curry would never be the same again (plenty said he never had been what he once was after being ravaged by Lloyd Honeyghan a couple of years before), and McCallum would not be, either. No-one wanted much to do with the slick, tough, hard as nails champ from that chilled out island. At least McCallum was never able to come closer than sniffing range to a genuine super-fight opportunity.

McCallum never wasted a thing when he was in the ring, yet it could be argued that the superpowers of the sport ruined his chances of being deified the way Hagler, Leonard and Hearns are today.

Maybe McCallum was better than all of them. Maybe.