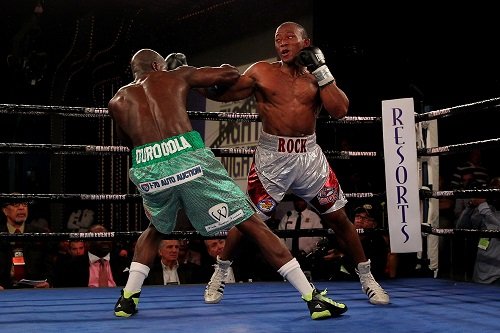 The young Mchunu, 26, of KwaZulu-Natal, South Africa, made his US debut Aug. 3, 2013 at Mohegan Sun in Uncasville, CT with a stunning unanimous decision upset of former heavyweight contender “Fast” Eddie Chambers. He then went on to defeat Olanrewaju “God’s Power” Durodola on Jan. 24, 2014 on NBCSN Fight Night in Atlantic City, NJ. This will be his first fight back in his home country since signing with Main Events last year.

Dos Santos, 36, will make his South African debut against Mchunu. “Gaspar” has won his last four fights in a row, all in his hometown of Sao Paulo. Julio has an impressive 88% (23 of 26) knockout-to-win ratio and has never been stopped.

A confident Mchunu said, “I am going to traumatize my Brazilian opponent, Julio Cesar Dos Santos, from beginning to end. He’ll take up soccer when I’m finished with him.” To which his trainer, Sean Smith, replied, “It’s a bold statement but I think Thabiso can give the world another superstar, this time in a 200 pound frame.”

Main Events CEO Kathy Duva said, “Our plan for Thabiso is to keep him active to build a following for him here in the United States and continue to build on the following he has in South Africa with our partner, Showpony Promotions. Dos Santos is a tough opponent who will present a good test for Mchunu and the bout is sure to entertain his fans in South Africa. A win will also move him up in the ratings, which brings us all closer to the goal of capturing a world cruiserweight title.”