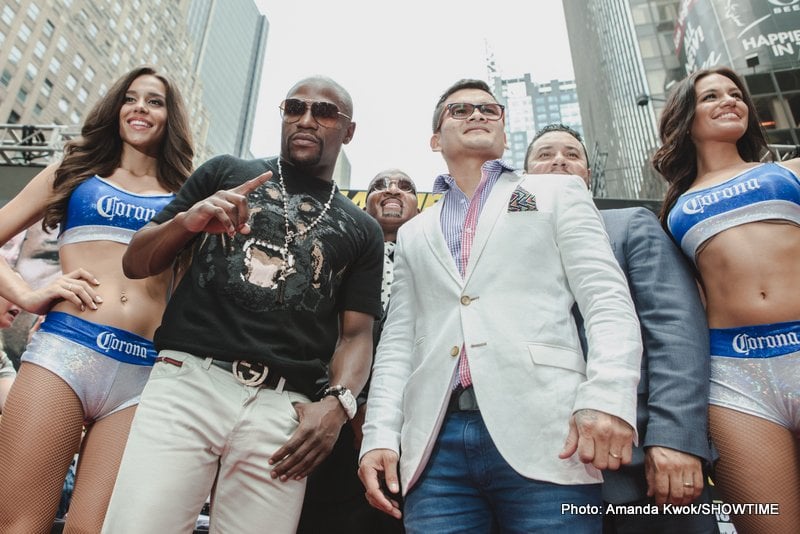 “I don’t need to change my style. The guy who got the loss needs to change his style,” said Mayweather.

“Although I recognize Mayweather is a great boxer, fighting him was easier than many people think. He has a good defense, but he has flaws and he showed them last May,” said Maidana. “If you want to see a real fight, watch us on September 13. I’m going to win this fight.”

Their first meeting this past May was an epic 12-round welterweight world championship showdown that was arguably the toughest and most exciting fight of Mayweather’s brilliant career. Maidana attacked Mayweather with ferocity and fearlessness, landing more punches on the pound-for-pound champ than anyone he has faced in his undefeated career.

Here’s what the participants had to say on Monday: 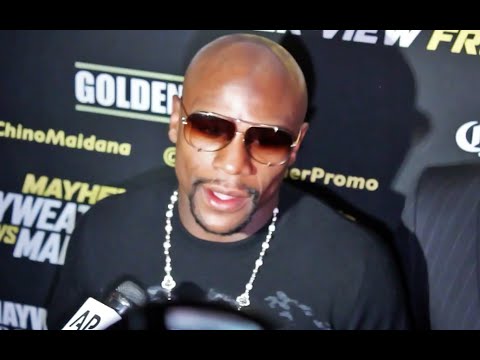 “My job is to win. Everyone remembers a winner. That’s my legacy.

“I don’t need to change my style. The guy who got the loss needs to change his style.

“Marcos Maidana came out and gave a tough effort, I mean he fought his heart out but it wasn’t clean.

“Was I ever hurt? Sure, the shots to the back of the head hurt. Whenever you’re in a heated battle you are going to be sore. It comes with the territory.

“Is Maidana a better fighter than Canelo? No. Cotto? No. He’s just a dirtier fighter. I didn’t get a deep gash from a punch; I got it from a head butt.”

“Cotto is a solid competitor but we saw what happened to him against Floyd Mayweather. When he fought me, they said he was washed up. Then, he fights again and wins, and apparently, he has been resurrected. Same with Marquez.

“There’s always testing. I’m the face of boxing and I want to clean the sport up.

“First they [Team Maidana] want to use gloves with no padding, and then they want to use knees, elbows and everything else. My back is always against the wall with Team Maidana.

“Without a doubt we are going to prove who won the first fight with this fight; with this rematch.

“I fight dirty? He’s the king of the elbows.

“The rematch is a big deal in Argentina. The entire country watched the first fight. There’s going to be no exceptions in this one. Everybody is going to watch.

“Robert Garcia is very important presence in my career. I feel very comfortable training with him. I’ve been working with him since I faced [Jesus] Soto Karass and I think I’m going to retire with him.

“I’ve trained with many trainers and they all tried to change my style. That’s why I lost my way at some point in my career. But with Robert [Garcia], it is different. He added to my style and he brought me back on track.

“I keep getting better in each fight, with defense, head movement. What Robert has done is a fine tune. In the first Mayweather fight, I was a little too anxious, and that’s one of the things that Robert helped me fix.” 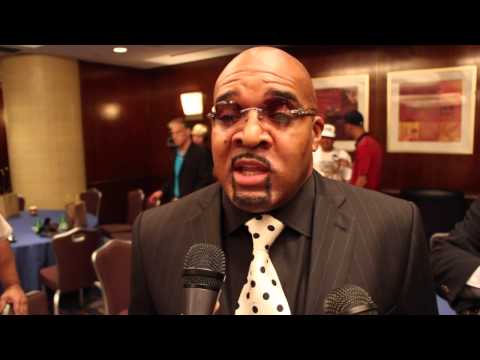 “The fight was so good the first time, he’s trying to claim victory in this fight.

“Every great fighter has a great team behind them. Maidana has Robert Garcia and Sebastian Contusi, his manager. They advise him and training him well.

“This is an anticipated rematch that will be more entertaining than the first fight was.

“The last fight produced a winner, MAYHEM will produce a champion.” 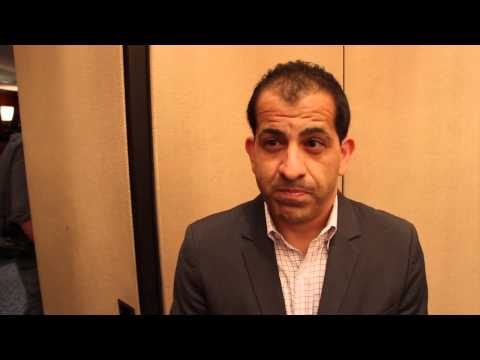 “They called it an ‘Epic fight’, ‘Electrifying,’ ‘A relentless assault,’ ‘Mayweather’s toughest fight in years.’ Those are some of the words writers used to describe the first fight between Floyd Mayweather and Marcos Maidana.

“Some people think that Mayweather won the first fight comfortably, some others think that he won by a slimmer margin. I’m expecting this rematch to pick up right where the last one left off.

“If you look at the judges’ scorecards, they basically split the last five rounds. That’s something we don’t see in Mayweather opponents; to be competitive to the very end and to provide that much action, let alone excitement. That’s why we want to do Mayweather vs. Maidana again.

“We are absolutely happy with the financial performance of the May event. If it wasn’t a success, we certainly would not be doing a direct rematch four months later.”

“Maidana deserved a rematch and Mayweather gave it to him because deep down he feels he has to prove himself.

“The driving force behind Maidana is not only his team, it is also the Latino Power.

“Maidana’s empowerment comes from the Latino power that’s going to help him make history on September 13 and end Floyd’s reign.”

“Golden Boy Promotions is happy to work once again with Mayweather Promotions. We are committed to bringing the best fights to the public and that’s what we are doing with this rematch.

“I’m told this is the greatest city in the world and that’s why we bring the best fighter in the world to kick off the MAYHEM press tour.

“He’s a little bit like Superman [Floyd Mayweather]. He can do it all. He can box. He can punch. But guess what? Even Superman has a weakness and we saw a little bit of that weakness in that first fight. Some call him Chino, but we call him Mr. Kryptonite.”

“We are glad Maywweather is giving us the rematch. He’s a tremendous warrior and a tremendous fighter, but we know that we are going to go out and give everybody what they want to see: a great fight.”