Fighting in the chief support bout, the powerful 24-year-old Lara knocked Sanchez down twice en route to a third round knockout.

Lara knocked Sanchez down with a short right to the head in the first round. Sanchez was in the process of throwing a punch of his own when Lara caught him with a crushing right hand that put him down.

In the final seconds of the second round, Lara landed a tremendous right hand that buckled Sanchez’s knees, causing him to fly backward and almost fall.

Lara then landed two more big shots before the round ended. It was fortunate for Sanchez that the round ended when it did because he probably wouldn’t have stayed up much longer.

In the third round, Sanchez hurt Lara with a body shot that had him holding on. Lara fell down while trying to hold onto Sanchez.

While Lara was down, the referee gave him a warning that he would take a point off if he continued to hold. “If you hold, I’m going to take a point. Don’t do that again,” said referee Ray Corona to Lara.

That warning seemed to energize Lara, who got to his feet and went after Sanchez, immediately hurting him with the first right hand that he threw, and then staggered him with a massive left hook.

Sanchez then tried fleeing, moving on the outside near the ropes. Lara then cornered Sanchez and nailed him with a four-punch combination that folded him backward like a deck of playing cards.

While Sanchez was falling, he tripped the referee Corona. Sanchez was too hurt to get back up and the fight was immediately halted. The time of the stoppage was at 2:59 of the third.

After the fight, Lara called out Josh Warrington, letting him know he wants a trilogy match.

“Josh Warrington sells so many tickets. That performance tonight from Lara is the kind of a performance that this going to turn him into a bigger star, and he is the most dangerous featherweight on the planet, unquestionably.

“It’s a shame that he’s friends with [Emmanuel] Navarrete because Lara vs. Navarrete is a great fight,” said Hearn.

“It was an excellent fight. I think the people saw a better version of the Bronco Lara,’ said Mauricio Lara to Matchroom Boxing following his third round knockout win over Emilio Sanchez.

“I wanted to hurt him in the first round,” Lara continued. “I came out for the knockout, and I thought you saw a better version of me than ever.

“Of course, I came out very motivated. I wanted to demonstrate who I was in my debut in the United States, and I really wanted enjoy the fight.

“What you saw in here was all the work that we did in the gym. Yes, he did hurt me, but I took out the fury that people have known me for. So we got the victory after that.

“It was an instantaneous shot,” said Lara on getting hurt by Sanchez in the third. “I have to be loose, I have to be a little bit firm when people are throwing punches at me. So that’s what it was, and then I was able to recover.

“It was good. I was really happy that everyone came out to see my return. I enjoyed it more than ever, and it was a great opportunity for people to see me,” said Lara. 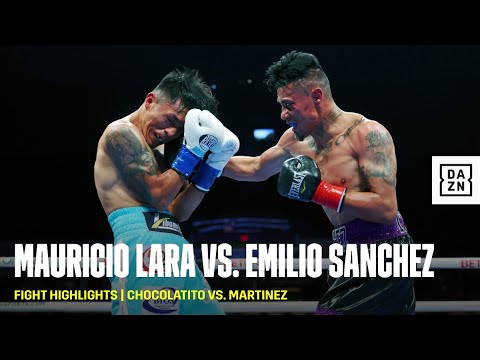