The Manny Pacquiao era may (or may not) have come to an end, but there is a young and powerful, exciting and hungry 126-pound fighter waiting in the wings, ready, some people say, to become “the next Manny Pacquiao.” 26-year-old Mark Magsayo – who scored a truly chilling KO over Julio Ceja on the Ugas-Pacquiao card in Las Vegas (Ceja sent to hospital, reports thankfully saying he is okay) – was signed up by Manny Pacquiao Promotions last year and he has been working with Freddie Roach.

Pacquiao has said his countryman Magsayo, 23-0(16) “reminds him” of his younger self – “we both struggled to come from nothing,” Manny has said of the unbeaten featherweight. While Roach has gone on record as saying Magsayo “might punch harder at 126 than Manny did.” Sean Gibbons of MP Promotions says Magsayo is the next “breakout star.” 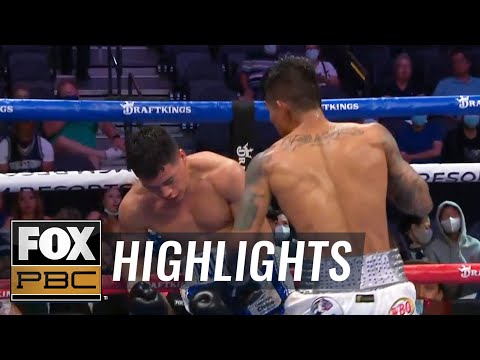 Those who saw Magsayo rally to knock out the experienced Ceja on Saturday night will certainly want to see more of him. Turning to boxing at the young age of just 8, Magsayo had a reported 200 amateur fights and he often won the “Best Boxer” award when fighting in Filipino tournaments. Magsayo went pro in May of 2013 and he had his U.S debut in 2015. The Ceja fight was Magsayo’s third fight in a row in America.

Magsayo is far from the finished article, as the Ceja battle showed; Magsayo being knocked down in the fifth and hurt plenty. But the man known as “Magnifico” showed real heart and desire and he has great people looking after him. Whether or not he turns out to be “the next Manny Pacquiao,” Magsayo has already shown he is one to watch.

Magsayo is closing in on a world title shot and 2022 could prove to be a big year for him. Pacquiao says he loves Magsayo’s work ethic, while Roach says he really rates Magsayo’s punching power – “He has power in both hands,” Freddie said of the 26-year-old. “He’s dangerous at all times. He can knock guys out.”

While Magsayo himself says he has already improved under the tutelage of Roach – “My punching was wild before,” he said. “Now I’m more accurate. Freddie is correcting my mistakes. It’s great to have a legendary coach in my corner.”

Roll on Magsayo’s next fight.