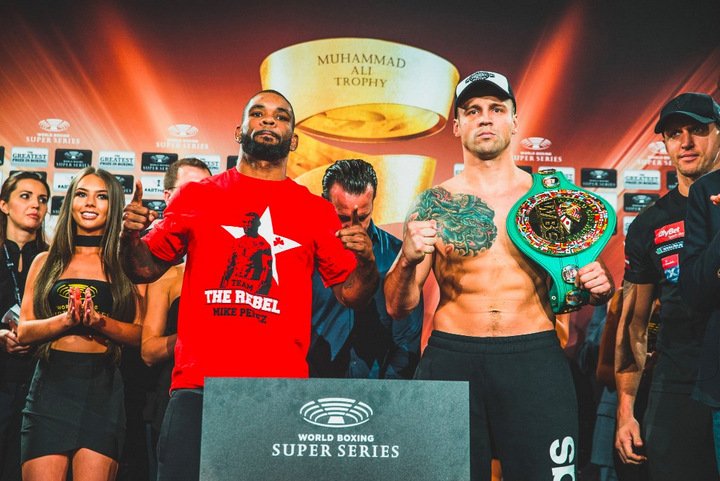 “Every fighter in this to tournament deserves to be here. I am not an odds maker, so I don’t do predictions. I can only promise that I will do my best to win in front of a sold-out arena and make my countrymen proud!”

Mike Perez brought a cake to the podium:

“I did that to show that I did not have any problems with making the weight. Some journalist asked at the press conference about a rumour saying that I was struggling to make weight. But I have not been struggling. Actually, I have been eating cake all week. Latvia has great cake.”

“I am motivated. My kids motivate me the most. I predict I win. I can only see me winning this fight. I do not care how I will win. One round or 12 rounds, I will get the win.”

There are still a limited number of tickets on sale at https://shop.piletilevi.ee.

Four exciting bouts on the “Briedis vs. Perez” card, promoted by Sauerland Event, will air in Canada exclusively on Super Channel.

All WBSS fights will also be available on Super Channel On Demand.

To watch all the World Boxing Super Series action live, as well as more exciting boxing to come, fight fans in Canada can contact their local cable provider to subscribe to Super Channel and all that it offers, including premium series, movies and much more, for as low as $9.95 per month.
About Super Channel

Super Channel’s mission is to entertain and engage Canadian audiences by providing a unique and exclusive entertainment experience. With a core foundation of integrity and accountability, we dedicate ourselves to implementing innovative programming strategies and unparalleled team work that provides viewers with exceptional value and variety.

Fans across the United States will have the opportunity to watch World Boxing Super Series action throughout the remainder of the quarter-finals as AT&T will broadcast this round of the tournament on AUDIENCE Network and other AT&T platforms, beginning with Saturday’s Mairis Briedis vs. Mike Perez WBC World Championship showdown from a sold out Riga Arena in Riga, Latvia.

“Given the level of the fights and the productions and events so far we are delighted to bring the Ali Trophy to the US fans on one of the largest possible platforms. We expect the action to get even hotter beginning with this weekend,” said Kalle Sauerland, Chief Boxing Officer for Comosa, AG.

“We’re thrilled to be able to bring World Boxing Super Series quarter-final action to sports fans in the U.S.,” said Richard Schaefer, Chairman and CEO of Ringstar Sports. “AUDIENCE Network, AUDIENCE Network On Demand and DIRECTV NOW are great platforms for this exciting round of cruiserweight and super middleweight matchups as the fighters begin their quest for the Muhammad Ali Trophy.”

“The programming leading up to each quarter-final fight will give fans great insight into the combatants and what has gotten them to this point in their career,” said Schaefer. “You won’t want to miss any of the coverage leading up to these high-stakes showdowns.” AUDIENCE Network On Demand and DIRECTV NOW will make shoulder programming available during the fight week and continue all the way through fight night and conclude with a post-fight documentary.

Pre-fight coverage on AUDIENCE Network On Demand and DIRECTV NOW will begin with coverage of the Mairis Briedis vs. Mike Perez WBSS cruiserweight quarter-final and continue through the quarter-final matchups concluding with the Juergen Braehmer vs. Rob Brant super middleweight showdown.