Luis ‘King Kong’ Ortiz (33-2, 28 KOs) expects his WBC heavyweight title eliminator bout against Andy ‘The Destroyer’ Ruiz Jr (34-2, 22 KOs) to be a war when they meet on September 4th on FOX Sports PPV.

This is a fight that Ruiz has been dragging out for the last two years, seemingly delaying it for some reason. Had Ruiz fought Ortiz in 2020, he’d already be mandatory and likely would have gotten another title shot.

Ortiz, 43, needs a win over the former IBF/WBA/WBO champion Ruiz to put him in position as the mandatory for WBC champ Tyson Fury. Ortiz could end up battling the last man standing in whoever ends up with all the heavyweight titles this year.

Ruiz won’t be an easy win for the former Cuban national team member Ortiz because he’s lost weight and is motivated after a long layoff from the ring.

The 32-year-old Ruiz had hoped to get another title shot against Anthony Joshua when he was still the unified champion last year, but Oleksandr Usyk beat him.

Ortiz will need to fight much better against Ruiz than he did in his recent victory over Charles Martin in January.

The 43-year-old Ortiz’s mobility was nonexistent in that fight, which made it possible for the 6’5″ Martin to drop him twice. To his credit, Ortiz came back in the sixth round to knockout Martin after knocking him down twice.

“He likes his style a lot. He’s an all-out brawler and comes forward,” said Luis Ortiz to Fight Hub TV about his fight with Andy Ruiz Jr.

“We’ll wait for the fight to figure out what the style and game plan is,” said King Kong Ortiz. “War,” said Ortiz when asked how the fight will be with Andy.

“A little more focused and determined mentally,” said Ortiz when asked what he learned from his last fight against Charles Martin. “It was just a mental hiccup. Obviously, that won’t happen again.

“My main objective right now is to win on September 4. Then after that, I’ll see who crawls out and steps up. So far there haven’t been too many at the elite level.

“This fight is going to end in a knockout. I’m sure Andy thinks the same thing. This one isn’t going to go 12 rounds.”

“If Joshua comes prepared and has the size, ability, and style to win the fight, and should win the fight. It’s really on Joshua,” said Ortiz when asked who wins the Anthony Joshua vs. Oleksandr Usyk II rematch. 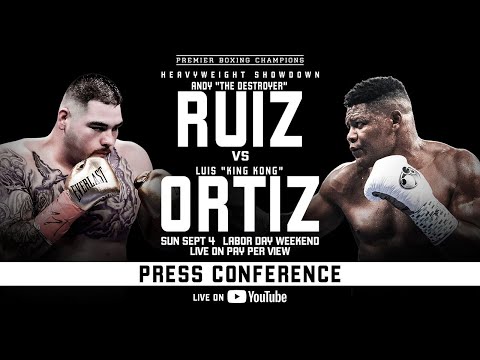